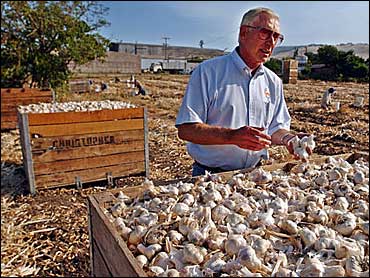 After more than a decade of lobbying politicians for tariffs and trade regulations to ward off Chinese exports, Christopher Ranch began importing garlic from China last week. Christopher's largest competitor, The Garlic Company, will begin importing Chinese garlic this week. Smaller farms are expected to follow.

Christopher, whose Gilroy-based company spent $400,000 last year on attorneys and lobbyists to fight Chinese exports, said he considered the move "unthinkable" even six months ago. But the dramatic rise in exports from China in recent months has driven wholesale prices so low that customers — including restaurants and grocery chains — demanded bulbs for less money than they cost to produce.

"We've held off the Chinese for 12 years, but now it's time to give up," Christopher said last week as he surveyed a dusty garlic plot in nearly 100-degree Fahrenheit heat. "We know there's a market for California-grown garlic. But if you look at history, people always go for the least expensive price. There are no secrets to the garlic business — it's all about price."

Gilroy, 30 miles south of San Jose, has been losing garlic market share for a half-decade. The city still anoints an annual Garlic Queen, sends young pickers to college on garlic scholarships, and will host 100,000 visitors to the 25th annual Gilroy Garlic Festival this weekend.

But it's unclear how long the city can hold on to its self-proclaimed status as "Garlic Capital of the World." China produces 66 percent of the world's supply of garlic, according to the U.S. Department of Agriculture, while the United States produces 3 percent. Nearly 70 percent of garlic sold in the United States during the off-peak winter and spring comes from overseas, according to the U.S. Census Bureau.

"Things evolve," said Gilroy Mayor Tom Springer, an IBM software engineer who is trying to reposition Gilroy from an agricultural backwater to a Silicon Valley biomedical hub with affordable land for technology labs and research parks. "We'll keep celebrating garlic, even if it's our heritage, and even if China is the world's biggest garlic region."

Garlic was ripe for Chinese domination because the 5,000-year-old plant, classified as both an herb and a vegetable, has a shelf life up to nine months. It can easily be stored and shipped around the world.

Chinese and American garlic taste similar. Chinese cloves are the same size and firmness as the "California White" that dominates U.S. store shelves, but Chinese garlic often has a tough, inedible stem shooting up from the center.

The average Chinese laborer gets about $1 per day, compared to about $8.50 per hour in California. China's low wages have hampered exports from Mexico, where workers average about $5 per day.

The decline in U.S. commercial garlic production has been swift. The average American consumed 3.1 pounds of garlic in 1999, nearly three times consumption in 1989, thanks to spicier palates and an influx of garlic-eating immigrants from Southeast Asia and Mexico. Garlic demand grew faster than demand for any other vegetable in the 1990s.

But domestic farmers began struggling shortly after the first Chinese bulbs came to the United States in 1993, when they underpriced American garlic despite tariffs of 376 percent. Growers say the bullish free trade policies of the Bush administration, and loopholes that eliminate tariffs, could speed their demise.

Christopher, 68, a third-generation garlic farmer, said the withering of his industry makes it easier to turn the business over to his son, Bill. The company will focus on mechanical processing — pressing garlic into oil or other products — and peeled and organic cloves, which consumers are willing to pay more for.

"I'm a realist," Bill Christopher said. "When we have our customers telling us, 'We want to buy Chinese garlic,' it doesn't give us a choice."