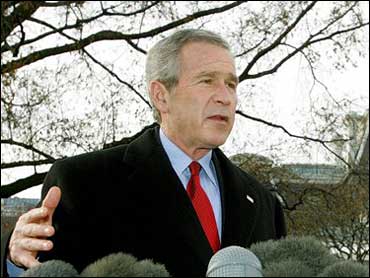 President Bush's administration defended its domestic spying program in a letter to Congress Thursday, saying the nation's security is more important than the privacy of individuals who might be caught up in the surveillance.

In a letter to the chairmen of the House and Senate intelligence committees, the Justice Department said Mr. Bush authorized warrant-less electronic surveillance to thwart terror acts against the United States.

"There is undeniably an important and legitimate privacy interest at stake with respect to the activities described by the president," Assistant Attorney General William E. Moschella wrote. "That must be balanced, however, against the government's compelling interest in the security of the nation."

President Bush has acknowledged he authorized such surveillance and repeatedly has defended it in recent days.

Mr. Bush's rationale for circumventing the court (video)
, saying, "He can essentially beg for forgiveness later instead of asking for permission in advance."

"I don't think the law is clear that it allows purely domestic spying, eavesdropping in this fashion," Cohen said. "And I think that's why the president decided that he would rely on his constitutional war powers, and essentially blow off Congress."

Moschella's letter was the administration's first public notice to Congress about the program in which electronic surveillance was conducted without the approval of a secret court created to examine requests for wiretaps and searches in the most sensitive terrorism and espionage cases.

Moschella maintained that Mr. Bush acted legally when he authorized the National Security Agency to go around the court to conduct electronic surveillance of international communications into and out of the United States by suspects tied to the al Qaeda network or its affiliates.

Eventually, Cohen says, "The federal courts are going to have to get involved to evaluate whether the president's war powers are greater
than the Fourth Amendment protections we all have to be free from unreasonable searches and seizures."

Moschella relied on a Sept. 18, 2001, congressional resolution, known as the Authorization to Use Military Force, as primary legal justification for Bush's creation of a domestic spying program. He said Mr. Bush's powers as commander in chief give the president "the responsibility to protect the nation."