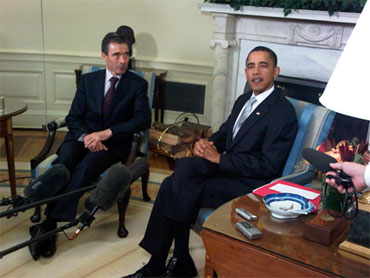 (CBS/Mark Knoller)
The White House today stopped short of embracing the new NATO chief's assertion that the troops of the 28-nation alliance will "stay in Afghanistan as long as it takes to finish our job."

NATO Secretary General Anders Fogh Rasmussen made the assertion of a possible war without end, at the conclusion of an Oval Office meeting with President Obama, who didn't take issue with it. (Read more on the meeting here>)

Asked later if Rasmussen was speaking for Mr. Obama when he said U.S. and NATO forces will stay in Afghanistan "as long as it takes," spokesman Robert Gibbs was evasive.

At first he said he didn't want to parse the words of the NATO chief even though the statement was straightforward and needed no parsing. Then Gibbs said he doesn't speak for Rasmussen.

Asked point blank if the president agrees with what Rasmussen said, Gibbs said the U.S. objective in Afghanistan is to "disrupt, dismantle and destroy al Qaeda" and prevent it from having the kind of safe haven from which it launched the 9/11 attacks eight years ago.

But would U.S. troops remain engaged "as long as it takes" to accomplish that goal, Gibbs would not repeat Rasmussen's words. Instead he said, "that is the objective of our U.S. policy toward Afghanistan."

With polls showing Americans growing weary of eight years of U.S. engagement in Afghanistan, the White House is understandably reluctant to suggest there might be no end in sight to the deployment there.

Mr. Obama is now weighing a recommendation from his top commander, Gen. Stanley McChrystal, to send up to 40,000 more troops to Afghanistan or face the possibility of military failure.

Mr. Obama today called it "absolutely critical" that U.S. and NATO forces succeed in vanquishing the al-Qaeda network. As to how best to make that happen, the president on Wednesday begins a series of strategy sessions with his national security advisors including McChrystal, a process which has Rasmussen's support.

"I agree with President Obama in his approach: strategy first, then resources," he said.

In other words, decide on a course of action, before sending more troops.

For that reason, the White House is unwilling to state publicly that it is committed to keep its forces in Afghanistan "as long as it takes."