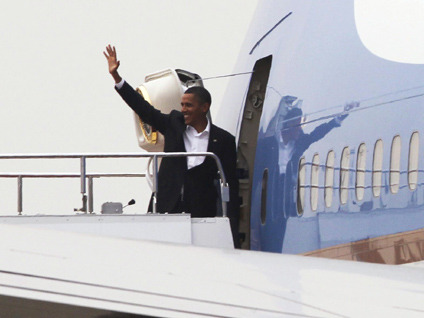 President Barack Obama's 10-day trip to Asia started off surprisingly well. Right off the bat he got a "deliverable," as they call it in the world of international diplomacy.

During his first stop in Mumbai he announced more than 20 trade deals between India and American corporations worth about $10 billion, "supporting" (something less than "creating") more than 50,000 jobs in the U.S.

Of course these deals were in the works for a long time, but the President eagerly took credit. Most of the news coverage was positive.

But there's a danger in front-loading the good news on an international trip. There's also a danger (as the White House certainly should have known) in building up expectations and then not meeting them.

That's exactly what happened in South Korea. To hear administration officials talk about it, the Free Trade Agreement with Korea was all but in the bag. So when it somehow slipped away, some reporters quickly declared it a "failure."

That was compounded by the fact that the administration was unable to convince other nations to agree to tough language on China's manipulation of its currency.

So in rapid succession they fell short twice, and the word "failure" started to creep into stories in a way that seemed to sum up the entire trip.

The President clearly was not pleased.

At his wrap-up press conference in South Korea he was unusually defensive. As he often does -- and sometimes he's right -- he criticized the media for focusing on immediate drama and disagreement, instead of the hard-fought, long-term results of international diplomacy.

It's not clear what irked him most: the media, or his frustration at not getting everything he wanted. But something had gotten under his skin.

When I asked him what was the "number one complaint, concern, or piece of advice that you got from foreign leaders about the U.S. economy and your stewardship of the economy?" he snapped back: "What about compliments? You didn't put that in the list."

Sheryl Stolberg of The New York Times asked him if his relations with other foreign leaders were a bit rocky now compared with previous summits when they "maybe were just a teensy bit falling all over you when you first arrived on the world stage."

The President didn't take kindly to that, either, sharply (some would say angrily) responding: "That's not how I remember it. I remember our first G20, you guys writing the exact same stories you're writing now about the exact same issues. Don't you remember that, Sheryl?"

So with the President apparently frustrated, and the word "failure" appearing in a steady stream of stories, the White House shifted into damage control mode, sending new National Security Advisor Tom Donilon to give a briefing to the White House press corps.

Here's how he summed up the trip:

"From the first day in Mumbai to today in Japan, I think that the United States has dramatically advanced its critical goals and its strategic interest in the region."

Wow -- sounds like a gigantic success. How does he justify that?

What about the "failure" of the South Korea Free Trade Agreement? It's far from a failure, he insisted. He firmly predicted (as did the President) that it will be finalized in the next few weeks, maybe a little longer, and added: "It was more important to get it right ... than it was to try to rush it or force it at that point."

How about the push-back from other countries on China currency manipulation? Was that a failure? No, he argued, downplaying the importance of the currency issue at this summit. "That wasn't the core of the discussion that was going on in the room, which was tightly focused on what was in the G20 communique." And the communique was a success, the White House argued, because it puts in place a warning system for dangerously unbalanced trade relationships in the future.

What about the dangerously unbalanced trade relationship we already have with China? They're working on it, and insist they're making progress.

Specifically asked if he acknowledges ANY failures, Donilon gave barely an inch: " I think that any disagreements were really around the margin of this, and it seems to me have gotten exaggerated."

So what's the bottom line? Failure or the raving success Donilon describes?

"Time will tell" is the worst of all media cliches. But I'm afraid in this case it's accurate. If the trade agreement is finalized, China moves on currency, and seeds planted on this trip lead to opening markets to U.S. goods, in retrospect the White House will say they told us so.

But even if they do get some good long-term results, that won't eliminate the short-term perception that the White House didn't quite have it together on this trip.

Chip Reid is CBS News' chief White House correspondent. You can read more of his posts in Hotsheet here.