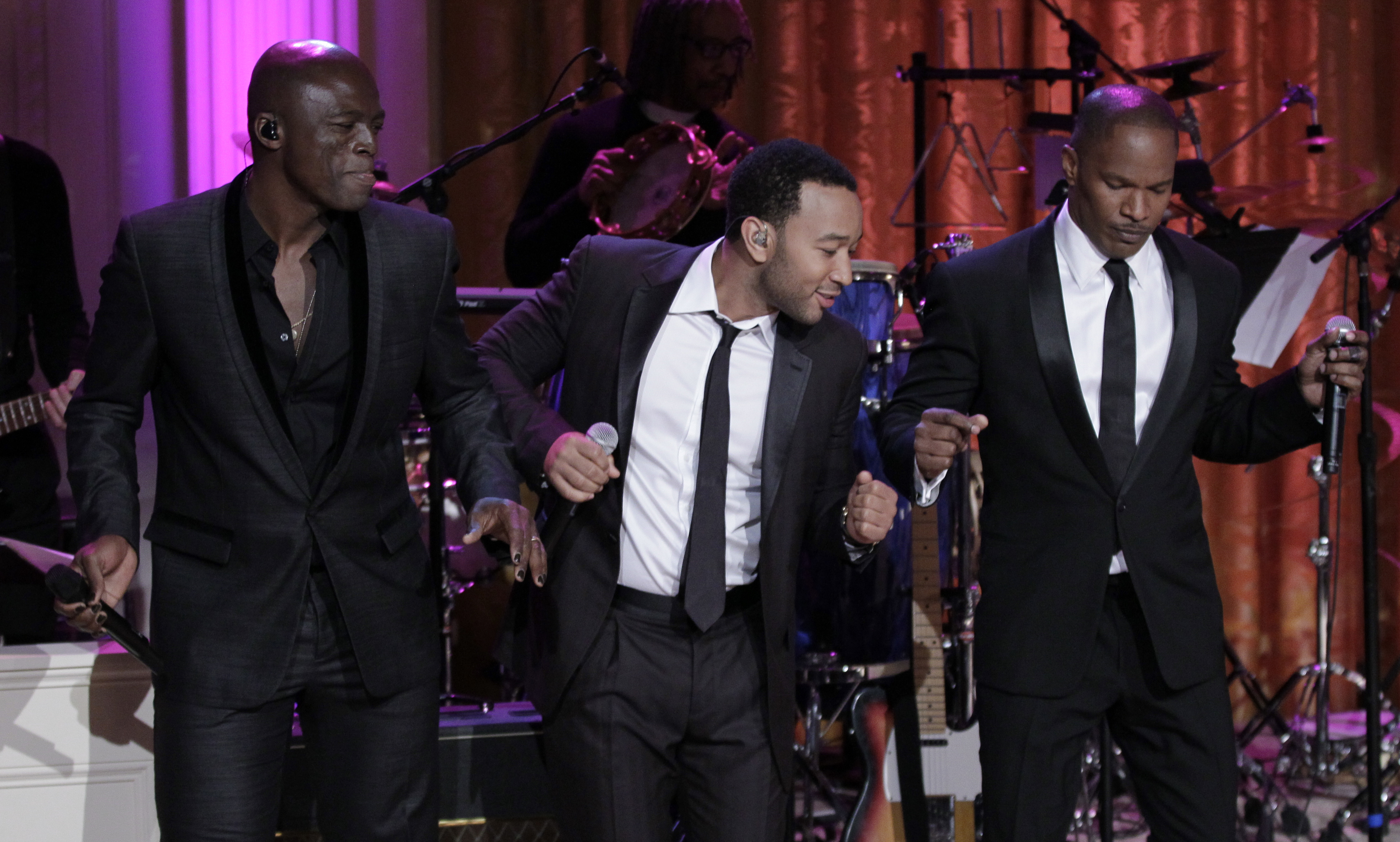 (CBS/AP) WASHINGTON - What's the one way a party with the thumping bass, big voices and all-star guests could be cooler? If the party is blowing out the doors of the White House.

The White House reverberated like a long-ago basement sound studio in Detroit on Thursday as the likes of John Legend, Seal, Jamie Foxx, Nick Jonas and Sheryl Crow channeled their inner Motown before Michelle and Barack Obama. Musical pioneers Smokey Robinson and Stevie Wonder joined in for the celebration of all things Motown.

PICTURES: Motown at the White House

Obama called it "the soundtrack of the civil rights era," and credited Motown's tight lyrics, catchy melodies and deep soul with helping to "blur the line between music that was considered either black or white."

Foxx, Seal, Legend and Jonas launched the East Room concert celebrating the Motown sound with a high-energy medley in which the four took turns as backup dancers, complete with some smooth dance moves to the likes of "Get Ready," "The Way You Do the Things You Do," "Can't Get Next to You" and "Ain't Too Proud to Beg."

Not to be outdone, the trio of Natasha Bedingfield, Jordin Sparks and Ledisi took a Supremes-esque turn singing "Stop! In the Name of Love."

Legend delivered a soulful rendition of "Heard It Through the Grapevine" that left Foxx, who also served as the program's host, to joke that nowadays the story was more likely to be "heard it through my Twitter."

"I'm going to tweet it right now," he joked.

Obama and the singers paid homage to the genuine Motown greats in the lineup: Robinson and Wonder. And Motown founder Berry Gordy was in the audience to hear Obama recount his record label's modest beginnings in a basement on West Grand Boulevard in Detroit, decorated with a banner outside that read "Hitsville, USA."

"At concerts in the South, Motown groups literally brought people together Ã¢?? insisting that the ropes traditionally used to separate black and white audience members be taken down," Obama recounted.

Robinson teamed up with Crow to sing one of his earliest hits, "You've Really Got a Hold On Me." And then he turned the stage over to "another guy who was here right from the beginning" Ã¢?? Wonder.

Wonder said he'd really just come to watch, but couldn't resist, performing "You Are the Sunshine of My Life" and kicking off the finale that brought all the artists back on stage for "Dancing in the Street."

Earlier Thursday, Legend and Jonas performed before cheering teenagers at a workshop in the State Dining Room that served as a tutorial on the history of the genre.

"Times have changed but the amazing thing is that that music is still relevant," Legend told reporters after he had delivered a room-filling rendition of Wonder's "Love's in Need of Love." He said his first exposure to Motown came from hearing his father and uncle sing around the piano, and that those songs were a huge influence on his own music.

"You can still put that music on now and get the party going," he said.

Michelle Obama told the young people that the color-barrier-shattering music of her youth "was so much more than just a soundtrack. It was a heartbeat."

"As Motown rose, so did the forces of change in this country," she said. "During that time, it was the time of King and Kennedy, it was a time of marches and rallies and groundbreaking civil rights laws."

And she confessed to a soft spot for one Motown artist in particular: "Who's my favorite?" she asked aloud. "Stevie Wonder, yes indeed."

Fans who didn't make the guest list for the concert can see it Tuesday on PBS' "The Motown Sound: In Performance at the White House."