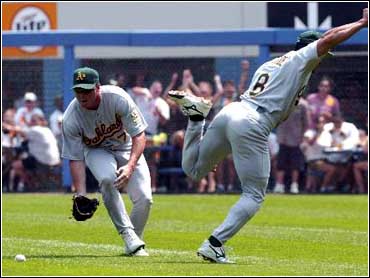 So with the temperature climbing into the upper 80s and the humidity giving Comiskey Park a sauna-like feel, Baldwin couldn't have been happier.

And the Oakland Athletics paid for his good mood, leaving the park as miserable as if they'd been stuck to a chair all afternoon, sweat dripping down their backs and clothes sticking to their skin.

"I always love hot weather, but today was a really good sweat," said Baldwin, who allowed five hits in eight innings Sunday as the Chicago White Sox blanked the A's 13-0.

"That was the best I've ever seen him throw," Oakland manager Art Howe said. "He had his `A' game today."

A matchup of 12-game winners was decisively one-sided. While Baldwin was dominating the A's, the White Sox were knocking around fellow All-Star Tim Hudson.

Hudson (12-4), who had won his previous two starts and had only one loss in 12 decisions coming in, gave up eight runs seven of them earned and seven hits in just 2 2-3 innings. It was his shortest outing since going 2 1-3 innings April 20 at Cleveland.

"There was no one batter. Just the whole game," Hudson said. "It's frustrating, especially when I didn't really give up a hard-hit ball all day."

Herbert Perry hit a three-run homer and had an RBI single. Carlos Lee drove in three runs, Paul Konerko and Jeff Abbott drove in two apiece for the White Sox.

Perry hit a three-run shot in the eighth on the first pitch he saw from T.J. Mathews.

Though it was only their sixth victory in 14 games, it was the second straight for the White Sox and preserved their nine-game lead over second-place Cleveland in the AL Central.

"Somebody asked yesterday if this team had the killer instinct the Cleveland clubs had in previous years," Perry said. "That really got under my skin. I don't think those teams had a better record at any point than we have now.

"We knew there would be rough stretches. The season is 162 games long."

Not even Baldwin, the staff ace, was immune to the post-All Star slump, winning just once since the break. But when he took the mound against the A's, he looked like the pitcher that started the season with seven straight victories.

He fanned seven, and allowed only two hits in the first three innings, singles to Jason Giambi and Miguel Tejada. No Oakland player got past first until the fourth and Randy Velarde reached second on an error by Konerko.

After allowing homers in 10 consecutive appearances, Baldwin didn't give up any for the second straight start. He was so dominant he was still throwing in the mid-90s in the eighth inning. Of the 127 pitches he threw, 83 were for strikes.

"J.B. was outstanding, superb," White Sox manager Jerry Manuel said. "Hopefully it will set the tone for the rest of the pitching staff. He pretty much dominated a very good hitting team."

Baldwin's only troubles came in the fourth and eighth innings. In the fourth, Oakland put Velarde on third and Ben Grieve at second on a fielder's choice. But Baldwin struck out Tejada, ending the inning.

The A's loaded the bases with two out in the eighth on singles by Ramon Hernandez and Terrence Long, and a walk to Frank Menechino. But Baldwin struck out Mike Stanley and Grieve grounded out.

"He just has good stuff," Grieve said. "He's got a great curvebaland fastball. If he's throwing those two pitches for strikes, he's tough to hit."

Baldwin left the field to a standing ovation, and Mark Buehrle finished with a hitless ninth.

"He was a joy to catch today," Mark Johnson said. "He worked fast and he's energetic. He's a different breed."

While Baldwin was flustering the A's, his teammates were beating up on Hudson. With two outs in the first, Frank Thomas drew a walk and Magglio Ordonez singled. That brought up Konerko, who sent a curveball deep into the left-field corner to score Thomas and Ordonez.

Perry then hit a bloop single between first and right field for a 3-0 lead.

The White Sox piled on five more runs in the third. After Thomas led off with a single, Hudson walked Ordonez and Konerko, loading the bases. The A's got Thomas out at home on a fielder's choice, but Lee then singled home two runs and Abbott hit an RBI single for a 6-0 lead.

A double steal put Abbott and Lee on second and third, and Lee scored on Johnson's groundout. Howe finally pulled Hudson after he walked Jose Valentin, but the White Sox scored again on an error by Velarde at second, making it 8-0.

"They beat us soundly today. Outpitched us, outhit us," Howe said. "Get your tail beat like this and it doesn't look pretty."