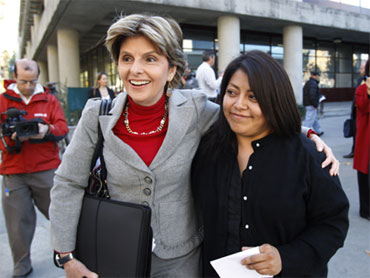 Former California gubernatorial candidate Meg Whitman agreed Wednesday to provide her former housekeeper with $5,500 in unpaid wages to settle a dispute that erupted after it was revealed the woman was an illegal immigrant from Mexico.

Whitman and her husband Dr. Griffith Harsh IV did not admit any wrongdoing while agreeing to the settlement at a two-hour closed meeting at the California Division of Labor Standards Enforcement.

"The larger message is that if you're Meg Whitman or a small employer or anyone else - if you hire someone, you need to pay them the wages for the hours that they worked. And there are no exceptions," said Gloria Allred, the celebrity attorney representing Nicky Diaz Santillan, Whitman's housekeeper for nine years.

Whitman did not attend the hearing. Harsh was present with a family lawyer and left afterward without talking to reporters.

Whitman has denounced the allegations as a "baseless smear attack" by Democratic challenger Jerry Brown and the unions who supported his campaign. Still, her campaign began to lose public support after the status of Diaz Santillan was revealed.

The former eBay CEO had portrayed herself as tough on immigration and responded to the revelations by saying she fired Diaz Santillan when she discovered she was an illegal immigrant.

Whitman then refused to offer help when Diaz Santillan asked about how she might be able to gain legal status.

The tactic appeared to cost Whitman votes among Latinos and independents that she had courted as essential to winning in a state where Democrats hold a 13 percentage point voter registration advantage.

Diaz Santillan told reporters Wednesday that she came forward so other housekeepers would not face discrimination.

"As housekeepers, we clean toilets, make beds, mop floors, do laundry, iron, mend their clothes and often we are asked to care for our employer's children, as well," she said, her voice breaking. "We do our best for our employers, and in return all we ask is to be treated with respect and to be paid for all the work we do."

Diaz Santillan said she was hired to clean the family's 3,700-square-foot house. The couple added duties such as grocery shopping, picking up dry cleaning, taking the children to school and driving Dr. Harsh to the airport.

The settlement reimburses Diaz Santillan for unpaid wages but not the mileage she says she was owed when she ran errands for the family. It also does not cover any penalties that could have been assessed for late payment. Allred had sought between $8,000 to $10,000 for the housekeeper.