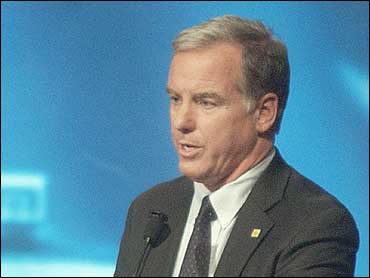 Dotty Lynch is the Senior Political Editor for CBS News.

"Who'll pop Howard Dean?" asked a Bush campaign strategist at lunch last week. He, like most of the political junkies in Washington, was looking at the rise of Dean over the summer and trying to game if and when the bubble would burst.

The first official Democratic debate in New Mexico on Thursday was expected to be the place for an all-out assault on Dean, but most of the Democrats and their advisers decided that attacking him directly would only give him more fodder and, at this point, they didn't want to lose precious TV time for their own messages.

One who did take on Dean was Joe Lieberman, though he did it in his menschy Uncle Joey manner. But after the debate, Lieberman let loose and went after both Dean and John Kerry on the issue of Iraq and foreign policy. "It's not the best time to put a rookie in charge of our country's future. It hasn't been a good time to have a cowboy in charge of our future, but we also don't need a waffler in charge of our country's future," Lieberman said, tossing a barb at George W. Bush as well. On Friday, Lieberman's campaign continued the assault, calling Dean's trade position "reckless."

The Democrats are hitting a crunch time: September 30 is end of the third quarter fundraising period and candidates are scurrying to achieve credibility through cash. But it's not just about bragging rights this time. There's only one more quarter to go before the Iowa caucuses and serious money is about to be spent. Over the summer, Dean surprised the field by taking some of his newfound cash and running ads in Iowa and New Hampshire. They paid off. A Kerry advisor admitted as much this week and said they were hoping that media surrounding Kerry's official announcement, followed by a round of paid ads, might stem his decline in the polls and bring Kerry and Dean back into parity.

Dean himself was unusually subdued in the debate, but there was nothing low-key about Dick Gephardt. He came to Albuquerque to play and to make sure that everyone knew that he thought George Bush was a "miserable failure." He called him that five times in the 90-minute debate. CBS News Early Show political analyst Craig Crawford thought Gephardt was the hands-down winner.

"He (Gephardt) was on fire, as he has been lately on the trail. While the other candidates fumbled around reinventing themselves, he's the only one who came across like he genuinely knows who he is. I think he knows this is his last hurrah if it doesn't work, so he is pulling out the stops. His way of 'attacking' Dean last night was to do his best to show the Democrats (and the labor folks) he can do a better job of taking the case to Bush," Crawford said.

Gephardt is the sentimental favorite of the labor folks, but the more pragmatic leaders, including SEIU President Andy Stern and AFSCME President Gerald McEntee, want a winner and they have been flirting with Kerry, Dean and Wesley Clark. Next week, 1,500 SEIU members come to Washington and Gephardt is working hard to make himself the winning choice as well as the sentimental one.

The others – Edwards, Graham, Kucinich and Braun – all had their moments and they may have a little more time to gain that "mo." Edwards' ads in South Carolina have moved him up a tick. Wesley Clark still waits in the wings and those Hillary boomlets will, no doubt, surface a few more times before November 21, the day that candidates have to file in New Hampshire.

But as we go into the fall, Dean is the guy to catch and who is going to "pop him" remains unclear.