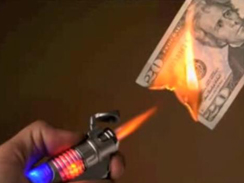 (MoneyWatch) Facebook's (FB) IPO was supposed to be the "the next Google (GOOG)." Four months later the stock has fallen nearly 50 percent. As usual, the financial media and investors who lost $50 billion are now playing the blame game.

While many investors and much of the media were blaming the lead underwriter, Morgan Stanley, for overpricing the IPO, CNBC host and New York Times columnist Andrew Ross Sorkin placed the blame squarely on Facebook's CFO David Ebersman. "If there is one single individual more responsible than any other for the staggering mispricing of Facebook's I.P.O., it is Mr. Ebersman. He signed off on the ever-increasing offer price, which ended up at $38 after the company had originally planned a price range of $28 to $35."

While it's sad that investors have seen $50 billion disappear, the real tragedy is that few investors seem willing to take the blame for their own mistakes. Investors who participated in the IPO have only themselves to blame. Let's see why this is the case.

The CFO, and CEO Mark Zuckerberg, had two roles in the IPO. The first is to make sure that the public has the information it needs to properly evaluate the offering. Using Sorkin's own words: "The disclosures in the company's I.P.O. prospectus -- which were Mr. Ebersman's responsibility -- were, for the most part, pretty transparent, giving investors a good sense of the business, despite all the hype." Going further, columnist Henry Blodget noted that if investors had actually read Facebook's IPO prospectus (and hopefully discussed it with a professional financial adviser) they would have seen a number of warning signs. Such as:

Clearly the company's executives had met their first responsibility. Unfortunately, you can bet dollars to donuts that almost none of the retail investors who participated had bothered to read the prospectus. They were simply caught up in the hype. It's also worth noting that the history of IPOs is that on average theytend to underperform similar stocks. To the evidence I would add the following: While "hot" IPOs sometimes do exceptionally well, investors should ask themselves the question -- "If it's really a hot IPO, why is my broker giving me access to it instead of giving that allocation to their most important clients, the big institutional investors and hedge funds?" Investors who get caught up in the "madness of crowds" have no one to blame but themselves.

The second responsibility of the company's executives is to get the highest price they can. Underpricing the IPO so that investors could make a quick profit would be a failure of their fiduciary duty to not only the company, but also to all the original investors who took the initial risks. As billionaire entrepreneur Mark Cuban wrote in a blog post: "The CFO's job is not to manage shareholder portfolios. His job is to help Facebook succeed." Cuban added the following insight: "I bought and sold FB shares as a TRADE, not an investment. I lost money. When the stock didn't bounce as I thought/hoped it would, I realized I was wrong and got out. It wasn't the fault of the FB CFO that I lost money. It was my fault. I know that no one sells me shares of stock because they expect the price of the stock to go up. So someone saw me coming and they sold me the stock. That is the way the stock market works. When you sit at the trading terminal you look for the sucker. When you don't see one, it's you. In this case it was me."

According to Morningstar, at the current price of 18.69, the stock is trading at more than 33 times next year's projected earnings. At the same time, a highly successful company like Apple (AAPL) is trading at a forward-looking P/E of under 13. Clearly, Facebook is still not a cheap stock. Further, investing in any individual stock is taking what economists call uncompensated risk -- risk that can be diversified away without reducing expected returns. And that is why I recommend that investors don't buy the stocks of individual companies. The idiosyncratic/unique risks of individual companies can easily be diversified away through the use of low-cost and passively managed mutual funds that buy all the stocks in their respective index or asset class.

What I have learned is that investors have an almost unlimited capacity for making mistakes. Yet, we have a very limited ability to admit the errors we make. We go through life assuming we are right about almost everything. Others make mistakes, but not us. When something does go wrong, either we attribute it to bad luck (if only blah, blah, blah, had happened), or we look to blame someone else. Making matters worse is that we ignore all compelling evidence that we were wrong. We suffer from confirmation bias, gathering only the evidence that agrees with our view. For example, you can be sure that most of those who lost money on Facebook's IPO would think Sorkin got it right and they would ignore Blodget's and Cuban's compelling statements.

As human beings we are going to make mistakes. The difference between smart people and fools is that when smart people err they don't cover up. Instead, they do what Mark Cuban did: They "fess up." We're forever told to learn from our mistakes but we can't learn if we can't even admit we made a mistake.