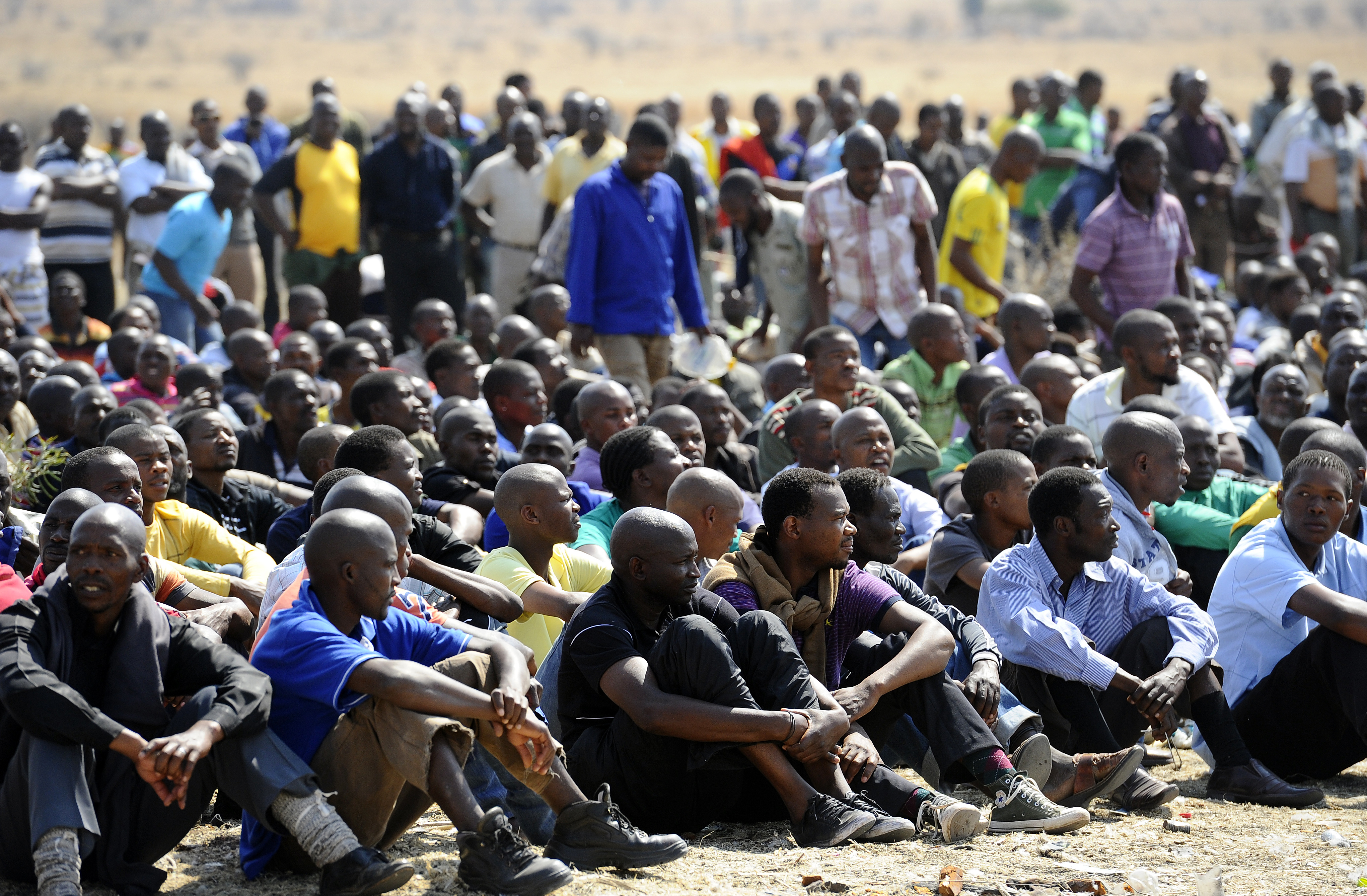 (MoneyWatch) Here's a summary of my almost 20 years as a student, researcher, and teacher of leadership and organizational behavior: Greatness happens in the moment, and there is no such thing as a company that is "built to last." In fact, companies that appear great have the seeds of their future destruction lurking within them. When culture and working relationships are not owned by the CEO's office, mediocrity can replace greatness with astounding speed.

There is no better illustration of this than Lonmin, a London-based company that operates platinum mines in South Africa. A long-running strike turned violent last month, and police opened fire on protestors, killing 34 and injuring another 78. Lonmin is a very important story, and one you need to know about. It shows how to unlock people's enthusiasm and passion, and how the process can go sideways if leaders aren't consistent.

I was an observer to Lonmin at a critical point in their story -- one that has not been discussed in the media. I visited their South African operations in 2006, spending several weeks in Marikana (the location of last month's shootings), and other mines. I had high-level access to then-CEO Brad Mills, along with other executives and managers. (I have never done business with Lonmin, never consulted to the company and never owned their stock, nor has anyone in my family.)

My co-author Steve Zaffron and I highlighted Lonmin in our 2009 book "The Three Laws of Performance." While Steve and I discussed this blog post, this piece reflects my views, and my views alone.

Prior to a turnaround launched by Mills, Lonmin was a mess. Its production was down, the labor unions were openly hostile to the company and to each other, and the mine was hated by local populations. The HIV rate was nearly 30 percent in the same-sex lodgings that housed company workers. Steve and I referred to the mess as "an impossible situation."

The main turnaround at Lonmin had to do with a little-known aspect of human nature -- that people live in line with the future they see coming. As Victor Frankl wrote in "Man's Search for Meaning," "It is a peculiarity of man that he can only live by looking to the future," (a quote made more stunning by the fact that Frankl survived a Nazi concentration camp. And if he were writing today, he'd certainly include women in his statement.) During his time at Auschwitz, Frankl noted that the prisoners whose sense of the future faded and had nothing to look forward to were the first to die, while those who lived for something tended to stay alive. Frankl focused on seeing his wife again and finishing a book, and he was one of the people who made it through. His actions conformed to the future he saw coming.

At Lonmin, the future before the turnaround was bleak. People talked about strikes, workers dying in the mines, more deaths through homicide in the unlit streets where the employees lived and other violence. Eventually, the mine would deplete the platinum deposits, leaving nothing but empty mineshafts and a needy population. Their actions were predictable: less than optimal effort, fights, power struggles and minimal cooperation.

The real turnaround started when Mills and others replaced what people saw coming with a new future, just as Frankl did by concentrating his attention on what he had to live for. Hundreds of Lonmin employees and stakeholders joined in a process to create their "new future" for the "Greater Lonmin Community" -- a term coined by the community itself. Much of this work was led by Steve's consulting firm, Vanto Group. Just as Frankl would have predicted, people's actions shifted.

It was during this turnaround that I visited Lonmin in 2006 to see what this "new future" of Lonmin was all about, and whether it was real. I was skeptical going in, but what I encountered was one of the most amazing situations I've ever seen. In townships that through my American eyes were "dirty" and "poor," I heard all types of people -- all races, both genders, young and old -- talk about how they were actively bringing the vision of Nelson Mandela to life, starting with the mine where they worked.

When word got out that an American business professor wanted to interview people about the new future at Lonmin, the line of people waiting often stretched 20 deep. Many nights, I would listen until my digital voice recorder would run out of space, and then I'd hand-write notes until I ran out of paper. One of the people I interviewed was Laolong Phiri. Through a thick accent and often broken English, he said:

It was like a different South Africa after the program [to invent a new future]. Nelson Mandela started talking about the transformation of South Africa when he got out of prison and became resident. I had no idea what he really meant, but now I see the possibility of changing the world itself, beyond a single company like Lonmin.... I understood very clearly that it takes individuals to put themselves in that space of committing [to something bigger than themselves]. I take that as a rescue process for everyone in Lonmin and beyond.

I heard similar comments from executives, managers, union leaders, elected officials and even clergy. It was an amazing time at Lonmin. I watched contracts get settled in record time and management and unionized workers cooperate. Again, Frankl's work explained it: People saw the same bright future, and so their actions worked together to create it. In fact, it was during this trip to Lonmin that Frankl's work finally made sense to me.

The Lonmin story is important for three reasons. First, it shows that creating radical, positive and quick change is possible anywhere by working on the future that people see coming. Unlike standard vision statements, which are intellectual abstractions, a "future" (as Steve and I use the term in our book) is real and is experienced every moment. The Lonmin leaders (including employees and stakeholders in the community) consciously replaced a future of decay with one of abundance.

Steve and I introduced a new phrase into management literature in The Three Laws of Performance: a "Self-led organization," in which an organization is run by a "Self" (note the capital "S") that emerges from the collective voices of the organization and its stakeholders. It is aspirational, smart and resourceful. Gordon Binder, former CEO of Amgen, told me and my "Tribal Leadership" co-author Halee Fischer-Wright that he knew something remarkable was happening at the biotechnology firm when people began making decisions on the basis of their shared values.

Binder told us: "I wasn't running the company -- the values were!" When the "Self" (which includes values) is allowed to run an organization, amazing things like Lonmin in 2006, or Amgen under Binder's leadership, happen over and over.

Second, Lonmin is important because the turnaround that happened under Mills' leadership is vital to companies around the world. There's a chorus of voices in leadership and management saying that today's methods of overseeing a company are on their last legs. Business theorist Gary Hamel has made the point clearer than anyone that management is "technology" (like a computer). Traditional management methods, his analogy continues, aren't bad, they're just old. Imagine trying to run a company's finances on an Apple II running VisiCalc loaded from a floppy disk when your competitors are using QuickBooks online.

Part of the "new version" of management and leadership is that vision, values and a new future need to come first. Actions will naturally fall in line, and it's then the job of managers to refresh the future, so that it remains vital and alive for people.

Dov Seidman makes a similar point in "How" about "self-governance." John Kotter's work is perhaps the clearest, arguing that leadership must come first and include alignment, direction, vision and motivation. The result is change. Robert Kegan noted that companies develop an "immunity to change." So without new leadership and management methods, companies become stale, with outdated processes that fail to look externally, and are increasingly fixed on financial and operational measures. Their innovation eventually dwindles, and their cultures erode to levels unable to produce anything but mediocrity.

Third, Lonmin shows how easy it is for the new future to fade, and the past to come back. In 2008, the company had production problems, and several analysts downgraded the stock. Under threat of a hostile takeover, Mills resigned, and most of the senior management changed. The new team emphasized production and financial return -- traditional methods of management and control -- with the goal of raising production and financial performance, rather than leading from the new future.

I haven't been back to Lonmin since 2006, haven't corresponded with Mills and haven't had any contact with people there since early 2009, so I don't know what people are saying now. It's possible that some are talking about, and acting in line with, the invented future. It seems certain that most are not.

The production problems toward the end of Mills' tenure are, in my opinion, a red herring in this story. By shifting focus from the new future to standard metrics, the displaced future (what Steve and I call "the default future") came back. Steve and I wrote in 2009 in the book:

In the course of writing this book, we came across several cases where leaders did everything in this chapter up this point, and then the effort collapsed. Sometimes it was because the company was sold, and the new management didn't understand what this effort was about. In other cases, a champion of the initiative left the company without training a successor. Without continuity, the Self of an organization dissipates, like smoke on a windy day, allowing politics and short-term interests to take over.

If companies are going to change and reinvent themselves, then they need to follow a path that will necessarily involve new futures, as they also raise performance standards. When production problems happen, leaders must not throw out initiatives like what Lonmin did after Mills. It is possible to focus on the new future and production issues at the same time. In fact, doing so is far more effective than to focus on one without considering the other.

Watching the events at Lonmin in 2012 is heartbreaking (something I wrote about in my personal blog), as I recall the eager faces and the voices cracking with excitement, and the many scenes from the people who inspired me in 2006. It's critical that we get beyond the events to the underlying dynamics, and learn from them. Our companies, and our international competitiveness, depend on it.