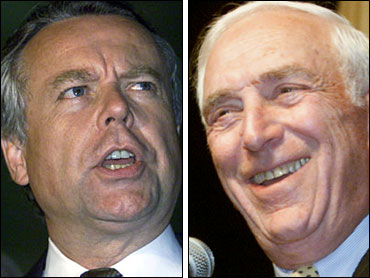 In his commentary, CBSNews.com Legal Analyst Andrew Cohen explains how the Democrats won round one in the their battle to run a replacement candidate in the New Jersey senate race, and, what the GOP is up against in appealing that victory.


The New Jersey Supreme Court ruling the Democrats had been hoping for was only seven pages long and two of those pages were spent by the Justices simply listing all of the parties to the lawsuit. So the substantive portion of the ruling was only five pages long and the Justices spent a little over one of those pages simply repeating what the New Jersey Democratic Party had asked for in its complaint to get a new name on the November ballot in place of Sen. Robert Torricelli.

Then the Court spent nearly another full page listing the procedural history of the case - it's a short one, after all, just a day long - and then "concluded that the central question before it is whether the dual interests of full voter choice and the orderly administration of an election can be effectuated if the relief requested by the plaintiffs were to be granted." The Republicans should have sensed right then - right there on page 4, even before the Justices got to the heart of their lightning-brief analysis - that they were licked, at least for now. And they are.

A unanimous court, made up, we were told, of Democrats, Republicans and an Independent, didn't leave much meat on the bone for the federal courts to pick over. The New Jersey Justices cited only two prior New Jersey rulings, made a fairly cryptic legal conclusion about the effect of the 51-day rule that is at the heart of the case, and then determined, right there on page 5, that the "equitable relief sought... is not inconsistent with the precedent of this Court and the terms of the statute."

One of the prior rulings cited by the Court was a 1952 case the Republicans had figured they had distinguished from the circumstances of L'Affaire Torricelli. The other prior ruling noted Wednesday was a 1991 case the Democrats apparently thought so little of that they never fully explained it in their submissions earlier in the week.

Citing a quote from the 50-year-old case, the New Jersey Justices declared that "it is in the public interest and the general intent of the election laws to preserve the two-party system and to submit to the electorate a ballot bearing the names of candidates of both major political parties."

Citing a quote from the 11-year-old case, the Justices declared that New Jersey's elections laws should be liberally construed "to allow the greatest scope for public participation in the election process, to allow candidates to get on the ballot, to allow parties to put their candidates on the ballot, and most importantly, to allow the voters a choice on Election Day."

And then the Court, using just one sentence, rejected the guts of the GOP case: "And the Court having determined that (the statute creating the 51-day rule) does not preclude the possibility of a vacancy occurring within fifty-one days of the general election." The statement is literally true, I suppose, but positively scant in its explicative effect. Let's just say it raises nearly as many questions as it purports to answer.

And that, quite literally, is the entire sum of what the Republicans now must work with on appeal to the federal courts. It isn't much and it isn't much of a stretch, either, to wonder whether the New Jersey high court purposely used as few words as possible in order to make it just that much more difficult for United States Supreme Court Justice Antonin Scalia to reach back into his bag of verbal tricks and make them look like the Seven Stooges. The less you say, the less chance there is you'll be criticized for it, right?

So now the Republicans have to make a federal case out of this and there are really two ways of doing that. The GOP can go to a federal court in New Jersey and ask a trial judge there to enjoin enforcement of the State Supreme Court order. If the Republicans choose that option, they'll likely get a quick hearing so they can make a factual record of sorts that would then wend its way up to the U.S. Supreme Court. Or the GOP simply can go straight to the nation's highest court and hope there are enough Justices who are willing to once again delve into a state's election process.

Either way, the Republicans will have to convince federal judges that this isn't simply a matter for New Jersey's courts to decide. The GOP tried to nudge the state judges in that direction Tuesday by arguing that there was a federal interest at stake - namely the interests of military personnel overseas who may already have received an "old" ballot - but the Jersey Justices didn't take the bait.

The federal courts may be more receptive to the Republican argument - they certainly were to a similar argument made by the GOP during the Florida recount saga two years ago - but that's certainly not a guarantee for Douglas Forrester and the people who want to see him on the ballot against the now-stale Robert Torricelli.

And, either way they choose to respond to this defeat, the Republicans will be in the odd position of asking a federal judge to order county election clerks to distribute ballots - the old ones with Torricelli's name still in - that everyone knows are not accurate. It's a strange argument to make when you are at the same time asking the voters to trust you for six years.