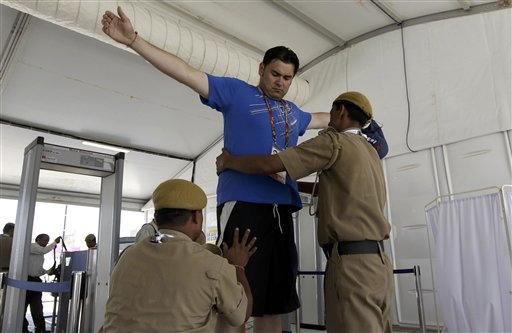 Grandpa Grassley gets it, and he wants to make sure granddaughter Grassley does, too, 50 or 60 years from now. Social Security, that is.

The venerable government program was political fodder Tuesday from the buttoned-down confines of a Senate hearing room to a boisterous Capitol Hill rally which attracted thousands of protesters to smaller demonstrations in 34 other cities across the nation. Democrats took on President Bush and his Social Security proposals with gusto, rebuffing pleas for bipartisanship from frustrated Republicans.

"If he's going out to push for privatization, let's help him pack," Sen. Dick Durbin, D-Ill., said to cheers from a sun-splashed crowd on the lawn across the street from the Capitol. He was ridiculing President Bush's heavily publicized 60-day tour to build support for his proposals.

"Personal accounts unravel the Social Security safety net in a way that makes it hard to find common ground," said Sen. Ron Wyden of Oregon, one of several Democrats who criticized the president's recommendations at a lengthy Senate Finance Committee hearing.

The Republicans didn't just sit and take it.

"Those of you that are bad-mouthing every other suggestion out there, suggest your own plans," Iowa Sen. Charles Grassley, the normally mild-mannered committee chairman, erupted at one point during the hearing.

"Doing nothing is not an option, because doing nothing is a cut in benefits," he added. "Grandpa Grassley gets Social Security, but my granddaughter, when she retires 56 years from now, if we do nothing, is going to get this cut that you're talking about."

Taken together, the hearing and the rally underscored the hardening of partisan differences in the three months since Bush called on Congress to enact legislation that included an option for younger workers to invest part of their payroll taxes on their own.

The president was in Galveston, Texas, during the day, the latest in a string of appearances designed to build support for his plan.

CBS News White House Correspondent Bill Plante reports that Mr. Bush stepped up his traditional Social Security stump speech for the Galveston audience by suggesting his generation has a moral obligation "to permanently solve the Social Security system once and for all."

There, he gave embattled House Majority Leader Tom DeLay a high-profile, in-person show of support, warmly thanking the Texas Republican, who is facing allegations of ethical improprieties, for his leadership in Congress.

DeLay, an influential conservative on Capitol Hill, is facing questions about money used to pay for some of his foreign trips, about political fundraising for Texas elections and about his ties to a lobbyist, Jack Abramoff, who is under federal criminal investigation.

His proposal, which Democrats unvaryingly refer to as privatization, envisions deep cuts in guaranteed benefits for future retirees.

House Republicans, confronting solid Democratic opposition and fearing a political backlash in 2006, have made it clear they want the Senate to move first on legislation that would make major changes in Social Security.

But efforts to do so are hampered by the same Democratic opposition and by skittishness among several members of the GOP's own rank and file. After weeks of insisting that any legislation would have to be bipartisan, Grassley said recently he might try to craft a measure that had only Republican support.

Even that may prove difficult, given the breakdown of votes on the committee, although he said after the day's session he remained determined to try.

"We need to start somewhere and we don't need to have unanimity among Republicans to start," said Sen. Craig Thomas of Wyoming, one of 10 Republicans on the panel, which has eight Democrats.

Grassley gaveled the meeting to order with a reference to the rally that Bush's opponents organized for later in the day.

"Outside the hearing room today, we have political theater and dramatic attempts to polarize Social Security along partisan lines," he said.

"I ask my fellow committee members to resist the temptation to allow such theatrics to pervade this hearing room. If there is ever going to be a bipartisan consensus for reform, the process must begin in this committee, and there's no time like the present to get started."

Sen. Max Baucus, D-Mont., responded moments later by agreeing changes were needed to assure that Social Security can pay full promised benefits after 2052. "But we do not need to privatize Social Security to save it," he said.

And Democrats' tempers flared at the rally on Capitol Hill outside the hearing chambers, Plante reports.

"If [the president] thought there was no fight left in the Democratic Party, by golly, he was sadly mistaken!" Rep. Steny Hoyer, D-Md., said.
Sen. John Kerry, D-Mass., who lost to Bush in the 2004 election, said it was the president who had failed to put a plan on the table. Referring to a proposal he made during his bid for the White House, Kerry called for repealing Bush-era tax cuts for the nation's top wage earners to help shore up Social Security's finances.

"We're going to do something," he said of the need to address Social Security funding difficulties. "We're not going to do nothing."

Grassley called the hearing in an attempt to review competing proposals that would make Social Security permanently solvent. Three of the alternatives call for personal accounts, while a fourth does not.

For much of the hearing, though, the witnesses were foils for senators seeking to elicit information favorable to their own views. Democrats prodded one witness to verify that a plan similar to Bush's would result in substantial new federal borrowing. Republicans called on another witness to affirm that without changes, Social Security would not be able to pay full benefits beginning at mid-century.