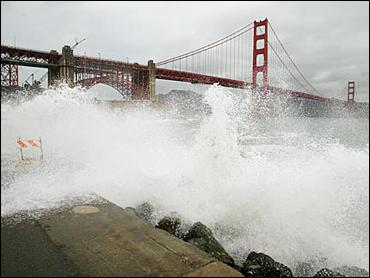 Already socked by high winds that left more than 300,000 people without power, grounded jets and yanked scaffolding down around buildings, many Californians along the coast wondered if flooding was far behind.

The National Weather Service issued a high surf advisory along much of the California coast and a coastal flood watch in the northern and central part of the state through Sunday.

Standing water along roadways prompted countless fender benders Thursday, but it was wind gusts of up more than 70 mph that did the bulk of the damage.

Trees crashed onto homes and parked cars throughout the San Francisco Bay area. The wind heaved plywood and other construction materials into traffic on the Richmond-San Rafael Bridge, forcing the state transportation department to close the span for several hours Thursday night.

As CBS News Correspondent Sandra Hughes reports, the first major western storm in six months signals the beginning of another El Nino weather system -- and a wet winter for many parts of the country.

It's not as damaging as the El Nino storms of 1997 and 1998 when it caused millions of dollars of damage, but this El Nino, a warming of the tropical Pacific Ocean, is expected to bring above average rainfall across much of the south, Nevada and California while keeping the pacific northwest dry.

Hughes reports that it's not such great news for the drought-stricken northwest, but a blessing for other bone-dry areas. Lake Tahoe is at its lowest point since 1994 and here in southern California we haven't had a storm since January -- that's ten long dry months.

The lights also went out on the San Francisco-Oakland Bay Bridge, forcing drivers to negotiate the crowded span in the dark as the wind raged around them.

At least 353,000 Bay Area residents lost power sometime during the day, according Paul Moreno, a Pacific Gas & Electric Co. spokesman. Power was restored to about 190,000 by late evening, but trees and power lines continued to fall onto parked cars and streets, prodded by winds and water-logged soil.

"It's a very busy outage," Moreno said. "We definitely feel this one."

In San Francisco, plastic recycling bins tumbled through streets amid a tide of tree limbs and other debris. The acrobats of Cirque du Soleil were forced to cancel opening night after their big top tent collapsed.

The storm also dumped a fresh layer of snow in the Sierra Nevada. The Boreal ski resort announced its slopes would open Saturday, California's first of the season.