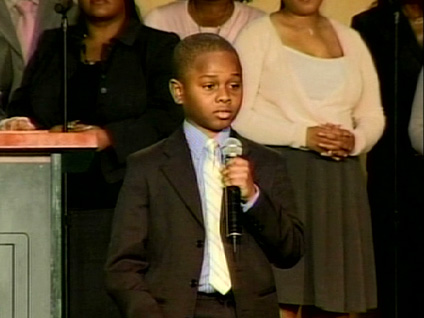 In the new comedy "Elf," Will Ferrell plays a human raised at the North Pole by Santa's elves as one of their own. All grown up, Buddy finally stumbles upon the truth of his past.

"The North Pole is a wonderful place, filled with good will and Christmas spirit and all those things and I'm a by-product of that world," Ferrell says about Buddy.

He adds, "It's definitely your family affair, if you will, which is kind of the appeal of it, because I really hadn't been in anything like that."

Ferrell, who created numerous memorable characters during his seven seasons as a cast member on "Saturday Night Live," and who co-starred earlier this year in the comedy hit "Old School," describes Buddy as having "no judgment of anything or anyone. He just accepts."

He continues, "Buddy is a good example of how ignorance is bliss. So, how others react to him is as much a comment on them as it is on Buddy. Some feel sorry for him, most find him annoying, but others just enjoy his total acceptance and wonder in something that seems so mundane, such as riding on an escalator for the first time. He's a person who finds joy and interest in the smallest of things."

The downside of being an elf in New York City, Ferrell says, is "he doesn't know that it's not OK to eat gum off the ground. Candy is there. You just get free candy."

Determined to find his father, Buddy ventures from the North Pole to New York City where his dad, Walter Hobbs (James Caan), works at a book publishing company in the Empire State Building.

DNA testing proves to Hobbs that Buddy is truly his son and he reluctantly introduces him to his wife, Emily (Mary Steenburgen), and their 10-year-old son, Michael (Daniel Tay).

As a new addition to the family, Buddy drives the Hobbs family members to examine their lives and brings back the spirit of Christmas.