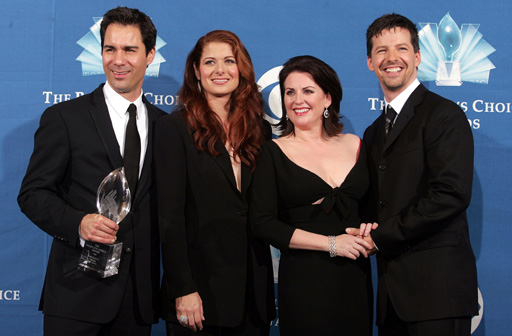 LOS ANGELES -- The stars of “Will & Grace” are back together in a video that delivers punchlines and a political message: Vote for Hillary Clinton.

The video opens with McCormack’s Will and Messing’s Grace trading quips and fretting over the prospect of a Trump presidency. Mullally’s Karen comes flouncing in with a pro-Trump sticker on her handbag, followed by Hayes’ undecided Jack.

He becomes the target of a tug-of-war between the two sides after he drops the fact he’s registered to vote in a battleground state.

“How can one unemployed white fella registered in Pennsylvania make a difference?” Hayes says, cluelessly.

Mullally warns about the dangers the country will face without Trump and Messing lists her reasons to vote for Clinton. But Hayes replies that he hasn’t heard the one thing that will make him chose one candidate over the other.