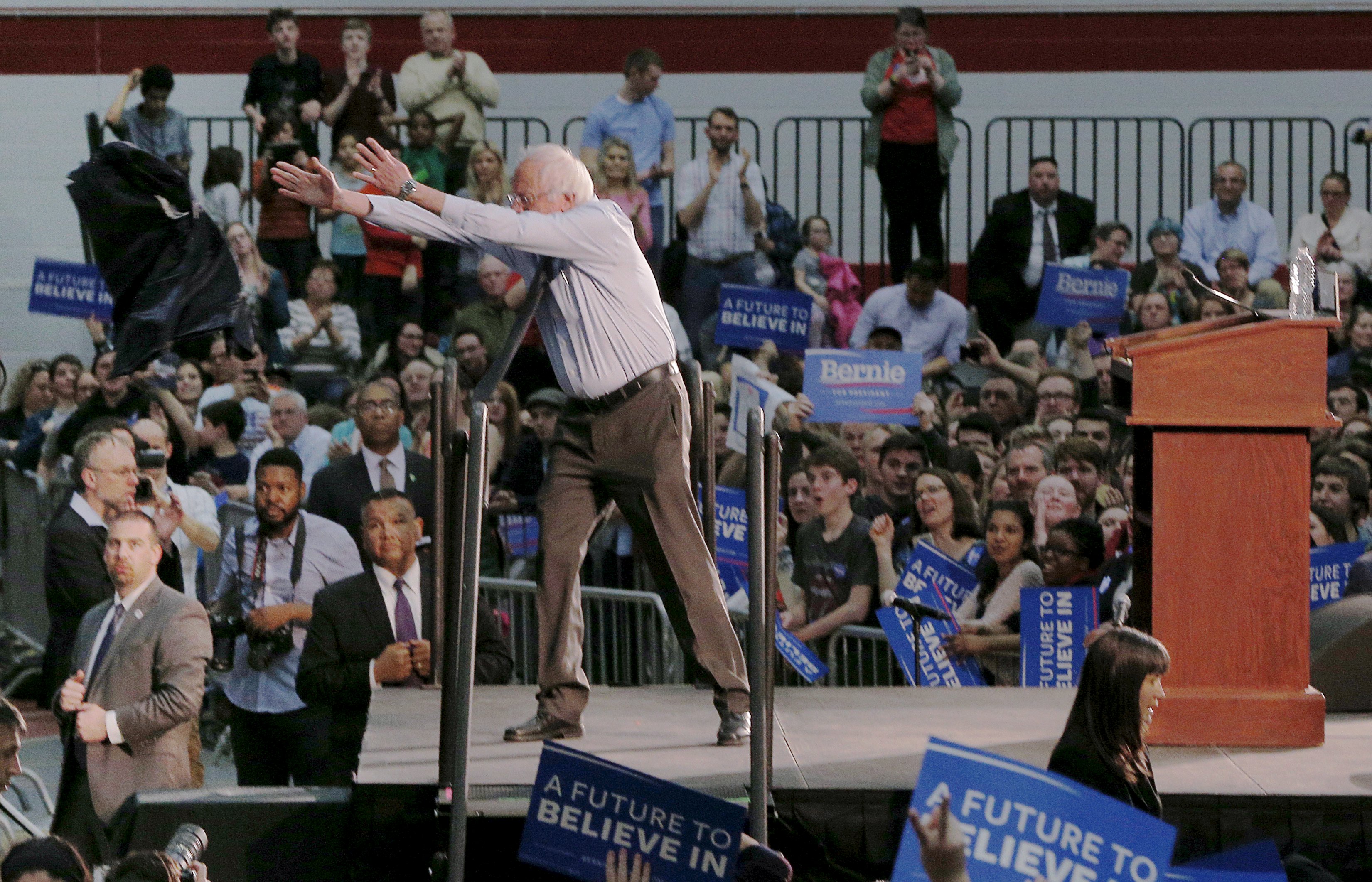 The night before Super Tuesday, Bernie Sanders felt things heating up at his rally in a humid Massachusetts high school gym. He pulled off his suit jacket and tossed it into the thick crowd behind him. The audience of 3,600 went nuts. "Bernie, Bernie, Bernie," chants broke out. "It's getting hot in here," Sanders said with a smile. Then he adjusted his tie and added, "Alright, we are getting warmed up in here."

But will Massachusetts stay hot for Sanders? His campaign wants to do well in the state - describing it as a "ripe opportunity." Polls have shown that Colorado, Minnesota, Oklahoma and Vermont are the other states where he has a shot at winning, but out of those, Massachusetts is the one with the most delegates.

"It isn't a slam-dunk," said Michael Gilbreath, who has been tirelessly mobilizing the Sanders support in the state since this summer. Polls reflect his sentiment. A recent poll by Suffolk University in Massachusetts has Clinton leading Sanders 50-42 percent. But over the past few months, Clinton and Sanders have been running neck in neck in the state.

Clinton won the state by a thin margin in 2008 but there are a number of reasons why Sanders may hold an advantage in the state in 2016.

"There are places that we like our chances and Massachusetts is definitely one of those," said Michael Briggs, Sanders' Communications director.

For starters, it is one of the most liberal states in the country and during the months leading up to the the New Hampshire primary - where Sanders pulled off a decisive victory - many liberal Massachusetts voters hopped the state line to attend his rallies.

"Oh gosh yes, they were there," said Arnie Arnensen, a liberal radio host from Concord, New Hampshire. She added that if Sanders loses in Massachusetts, it means Sanders "hasn't sold them on the long game."

There is also a substantial Elizabeth Warren coalition behind Sanders in Massachusetts. When Warren came into the scene, she was a "breath of fresh air," Gilbreath said. As someone who had never been deeply involved in a campaign, he saw her as a candidate who was reviving the FDR values of the Democratic party, so he got involved in volunteering for the Sanders campaign.

"The only other time I remember the response being this pronounced and positive was during the Warren campaign," he said of canvassing for Sanders over the weekend in Wayland.

The groundswell for Sanders stared early on in Massachusetts -- Gilbreath hosted a meeting to talk about Sanders in June and expected eight or nine people to show up, and 20 came -- but the Sanders campaign did not hire a state director until November 2015. In previous months the campaign was allowing folks to host events on their own. They could go on the website and sign up to host an event and get all the materials that they needed.

Is there worry that they were not on the ground garnering this grassroots momentum earlier?

"Well we always can do better than we have done" Briggs says, but he notes how well they did running campaigns in Iowa and New Hampshire. Now, the situation is different with few full-time troops on the ground for an extended amount of time.

"Those kind of things popping up organically in Massachusetts and all over the country are very impressive and it is the kind of campaign that he's been talking about a lot that comes from the people rather than top down campaign," Briggs said of these grassroots driven events.

On the Clinton side, there is still no official Massachusetts state director but they have a thick foundation due to endorsements from local politicians with their own networks including Mayor Marty Walsh, Senator Ed Markey and Attorney General Maura Healy. They are all knocking doors for Clinton.

However, Massachusetts is home to many colleges and universities so the youth vote could help Sanders in the state. That said, in 2008 less than 15 percent of Democratic in the state primary were 18-29 year olds. Sander will need that 15 percent and more on Tuesday. He made that clear in that hot rally on Monday night.

"If we have a high voter turnout tomorrow, the people of Massachusetts speak loudly, we are going to win Massachusetts," Sanders said. "Massachusetts will help lead this country into the political revolution!"

Sanders, for his part, voted early Tuesday in his own state of Vermont, heading to the polls around 7:30 a.m. in Burlington.

Accompanied by his wife, Jane, Sanders checked in with the polling station's staff. After casting his ballot, Sanders jokingly told reporters and some supporters: "I will tell you after a lot of thought -- I voted for me for president."

So, he said, "I know that Bernie Sanders got at least one vote. I was working on my wife, think I probably got two so we are feeling pretty good."

Of the other states voting in Tuesday's slew of nominating contests, Sanders said "our hope is that we can win a number of states and those states where we don't do well obviously we want as large a vote as possible. The goal of today is to end up with as many delegates as we possibly can."