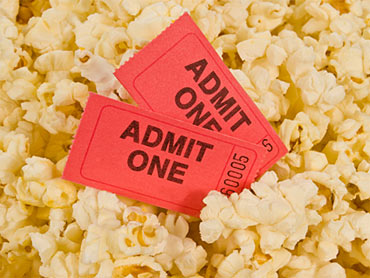 3-D movies have been filling the screens this year, but they may be draining your pocketbook.

And in major cities it's even more, in Boston and New York, a 3-D film will cost you seven dollars more than the 2-D version. Whitaker pointed out for a family of four, that's $68 -- before the popcorn.

But with 3-D movies all the rage -- 19 of them being released this year alone -- filmgoers may go along with the price hikes for now. The question is, for how long?

Paul Dergarabedian, box office president of Hollywood.com said, "Where is the tipping point? I think that's the key. When does it get too expensive that people make a decision not to go to the movie theater?"

But can you still get a bargain at theaters?

On "The Early Show," Catey Hill, money editor of NY Daily News.com and author of "Shoo, Jimmy Choo!", shared these tips for saving money at the theater:

Clip coupons & research discounts - You can purchase an Entertainment Book or go to Entertainment.com and buy a coupon book. If you often eat-out or do activities, it's a great deal. Check with your employer because they often have corporate discounts or coupons. If you're a member of AAA, Sam's Club or Costco, they also have great discounts. And even go to the movie theater's website because they often offer online coupons and discount codes.

Join frequent moviegoer programs - Theaters like AMC and Regal have these programs which are free to sign-up. You can get points when you buy movie tickets and those points can add up for free concessions or movie tickets. They also often send you discounts and coupons to use.

Buy tickets in bulk - You can buy tickets in bulk, for example, 50 tickets may be bought at a reduced price. You can share these tickets with family and friends and everyone can cash-in on the savings.

Avoid buying online - The reservation sites and online retailers like Fandango.com often add a surcharge to your final ticket price. If you're trying to save money, buy tickets the old-fashioned way by going up to the ticket window and paying the theater directly.

Seek out free movies - Contact your local theater because they often have free family movie nights or discounted nights. You may find great deals, especially when they need to drum up some business during the slow summer nights. Also, call your town because during the summer, they often offer free movies in the park or some areas do free or discounted drive-ins.

Think Ahead - The Entertainment Book often has great discounts and coupons. You may get a free soda or popcorn with the purchase of tickets. Also, go to online coupon sites like RetailMeNot.com - they often have discounts for movie tickets and concessions. The smartest thing to do is eat beforehand. Don't go to the movies starving because you can end up spending over $20 on food. Or pack your own snack and bring it with you.

At least one set of remains will be analyzed for evidence they belong to a victim of the 1921 attack on Tulsa's "Black Wall Street."