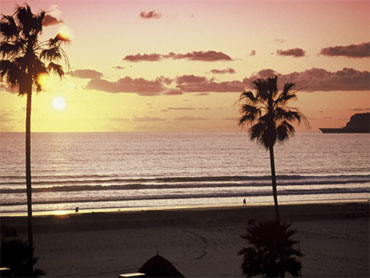 As "The Early Show" weather anchor Dave Price gets ready to embark on a ten-day, one-man reality show called "No Way Home," he's wondering it he'll need shorts or a winter jacket for Day One.

If viewers choose the world-famous San Diego Zoo as his departure point, he'll be off to sunny California to start his trip.

Price will mostly be surving on his wit, his wits and the kindness of strangers along the way as he hits the road with only a one-way ticket, $50, and some technical devices, including a Windows Phone 7 provided by Microsoft, to record his travels back home to New York.

Special Section: Check out Dave's Journey
Catch Up with Dave on Twitter
In Focus: Other Cities Where Dave Could Start

What does San Diego have to offer?

The city has one of the most ideal climates in the United States. It's generally dry and sunny with beautiful weather year-round and an average daily temperature around 70 degrees.

With a popualation of 1,316,837, San Diego is in the southwest corner of California, 120 miles south of Los Angeles and 20 miles north of Tijuana, Baja California, Mexico.

There's plenty to do in San Diego. Some of its renowned landmarks include:

• The Gaslamp Quarter, a dining, shopping and entertainment district
• The world-famous San Diego Zoo, which has some of the world's rarest wildlife, including giant pandas (and Hua Mei, the only panda cub in the U.S.), and koalas.
• Qualcomm Stadium, for major league sports and concerts.
• The San Diego Wild Animal Park is like a safari to many of the world's most exotic places.
• World-renowned Balboa Park is home to fifteen museums, various arts and international culture associations.
• SeaWorld San Diego entertains and educates with amazing creature from the sea.

The beautiful city of San Diego is rich in culture and history and is considered the birth place of California. Portuguese explorer Juan Rodriguez Cabrillo landed in what is now San Diego Bay and claimed the area for Spain on September 28, 1542. The Cabrillo National Monument commemorates the arrival of the Portuguese explorer and provides spectacular views of San Diego's harbor and coast line.

Keep checking our special "No Way Home" page to keep up on Dave's travels. And of course, you can follow him on Twitter (@earlyshowdave) and on "The Early Show" Facebook page.