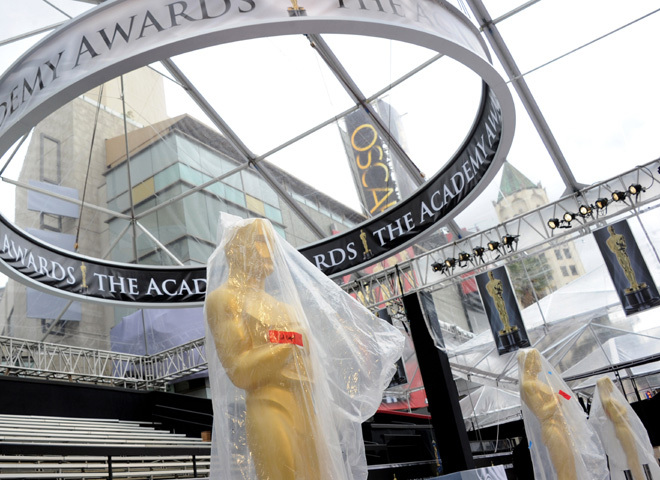 Yet "The Social Network," chronicling Facebook founder Mark Zuckerberg's fierce legal battles over the spoils of his creation, remains a serious candidate for the Oscar crown.

The two films have led a strong and varied field of best-picture contenders since they debuted nearly six months ago. "The Social Network" was the early leader, grabbing key critics' honors and winning best drama at the Golden Globes. Momentum shifted to "The King's Speech" as the film dominated on Oscar nominations morning and swept top awards from influential actors, directors and producers guilds.

One Oscar forecast is certain: chilly weather for dolled-up stars promenading on the arrivals red carpet at the Kodak Theatre.

Forecasts call for temperatures in the low 50s at show time, unusually crisp for Los Angeles.

Also up for best picture at the ceremony: the psychosexual thriller "Black Swan"; the boxing drama "The Fighter"; the science-fiction blockbuster "Inception"; the lesbian-family tale "The Kids Are All Right"; the survival chronicle "127 Hours"; the animated comedy "Toy Story 3"; the Western "True Grit"; and the Ozarks crime story "Winter's Bone."

With TV ratings on a general decline over the last few decades, Oscar organizers doubled the best-picture category from five to 10 films last year, hoping to spice up the show and bring in a broader range of films. Academy overseers also have tried to liven up the show with fresh hosts, new routines and different ways of presenting awards.

It paid off last year, when the low-budget Iraq War drama "The Hurt Locker" beat 3D science-fiction behemoth "Avatar" for best picture. TV viewers totaled 41.7 million, up 15 percent from the previous year and the biggest Oscar audience in five years.

This time, Oscar planners cast youthful hosts Anne Hathaway and James Franco (also a best-actor nominee for "127 Hours") and are promising exotic visuals as backdrops to the ceremony. They also stepped up pressure for winners to keep speeches short and sharp, rather than intone long thank-you lists.

The speech factor gets an early test with a couple of technical awards - art direction and cinematography - leading off the show, to be televised live at 8 p.m. EST (0100 GMT). Past Oscars typically started with a major prize such as supporting actress, but rather than a glib actor, the first word will come from behind-the-camera worker bees, whose speeches hold little interest for many TV viewers.

To hear Franco describe it, this year's nearly four hour show should prove a mix of old and new.

The Oscars have "been going on for 83 years. I'm kind of joining a bigger apparatus, so it's going to be pretty familiar in some ways, but I think it'll be fun," Franco said backstage Saturday at the Spirit Awards honoring independent film, where he won best actor for "127 Hours." "They're allowing us to be relaxed. They're not stretching us into some mold that we don't fit."

There are front-runners in most major categories and a few near-certain winners, including Britain's Colin Firth for best actor in the title role of "The King's Speech" and Christian Bale for supporting-actor as real-life boxer-turned-drug abuser Dicky Eklund in "The Fighter."

Natalie Portman is expected to win best actress as a ballerina lost in dangerous delusion in "Black Swan," while Melissa Leo is the supporting-actress favorite as a boxing clan's domineering matriarch in "The Fighter."

But both actresses face potential upsets. Annette Bening, a Hollywood favorite nominated three times previously without a win, is a strong best-actress contender as a stern but loving lesbian mom in "The Kids Are All Right."

Portman won best actress over a field that included Bening at the Spirit Awards, where "Black Swan" led with four prizes, including best picture and director for Darren Aronofsky.

The best-director Oscar comes down to Britain's Tom Hooper for "The King's Speech" and David Fincher for "The Social Network."

Hollywood veteran Fincher, a previous Oscar nominee for "The Curious Case of Benjamin Button," won best director at the Globes.

First-time nominee Hooper, best-known previously for classy television productions, won the filmmaking prize from the Directors Guild of America, whose recipient has gone on to take the directing Oscar 56 times in the past 62 years of the guild's awards.