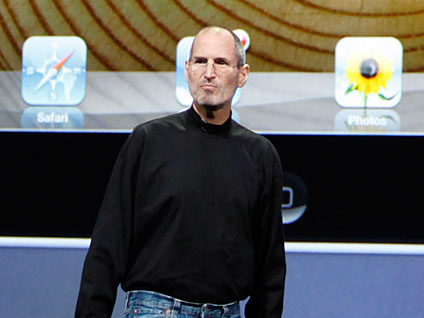 Against the backdrop of a possible antitrust clash with government regulators, will Steve Jobs buckle under pressure to modify his company's developer policy?

On Monday, there were reports of a looming antitrust probe into the terms of Apple's iPhone developer kit. Bloomberg subsequently turned up evidence that the investigation came at Adobe's behest. Adobe reportedly complained that Apple had unfairly barred competition by preventing developers from using its developer tools to build applications for iPhones and iPads.

Last week, Jobs issued a long public statement spelling out his thoughts about Adobe's Flash technology. His basic point: Flash still needs a lot of work before it can get to the point where it offers Apple smartphone users the sort of experience they've come to expect on an iPhone. For its part, Adobe has rejected Jobs' argument as self-serving. Its executives point to the new restrictions outlined in Apple's developer policy as evidence of an unfair business practice.

The clause getting so much attention is section 3.3.1, which essentially is the no Adobe Flash clause.

The challenge for Adobe is to convince regulators that Apple violated terms of the Sherman Antitrust case. It won't be easy. Philip Elmer DeWitt correctly reminds readers that trustbusters would need to prove two points: that Apple's market share constitutes a monopoly -- itself not illegal -- and that it has abused that monopoly power in ways that damage its competition."

Whether Jobs's public statement about Flash inadvertently waved a red flag in front of regulators is something we'll likely know in coming weeks. But as a relative latecomer to the smartphone market, Apple still has a smaller share of the pie than Research in Motion (while Google's Android is coming on strong.) Proving the follow-up claim that Apple acted as a predatory monopolist will be doubly hard.

Now comes word that Apple might be able to avoid a clash with antitrust enforcers simply by modifying the terms of its developer agreement, finally face the one entity impervious to his charms or pressure.

However the issue gets resolved, Apple will also have its work cut out wooing developers upset by the recent affair. One of them, Hank Williams, an applications writer who also blogs, observed that Apple's basically arguing that it only seeks to shield customers from encountering bad applications on its App Store. "But," he wrote, "good intentions do not always mean lawful intentions, so even Apple's defenses, silly as I think they are, don't really address legality in the context of restraint of trade."