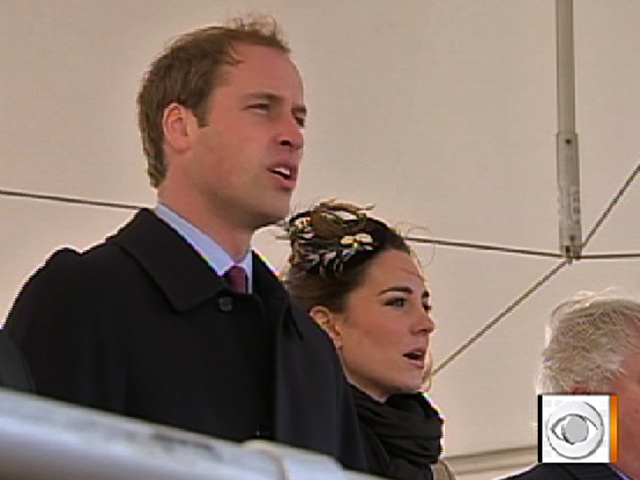 Prince William and Kate Middleton were on official business this morning for their first public appearance since their engagement.

On "The Early Show," CBS News correspondent Mark Phillips reported live from Trearddur Bay, Wales. "This is a town," he said, "on the very wild and remote and, I must say, windy northwest coast of Wales; you can probably hear the Welsh choir singing in the background and everyone here is gathered - not too many people home in this part of the country right now - gathered to welcome Prince William and Kate Middleton on their first official royal visit - royal function - they're here in this little town to name a lifeboat, a sea rescue boat."

He added, "But really this is an excuse, in fact a kind of trial run for the kind of life they're really going to be having once they get married and once Kate becomes a fixture on the royal scene. We can actually see, I believe, the royal cavalcade beginning to pull up here."

Kate Middleton arrived wearing a light brown suit with a brown scarf. Her hair was pulled up in a ponytail and a small hat with feathers perched on her head. Prince William arrived at the event wearing a black overcoat with a dress shirt and tie.

Phillips explained life in the public eye is all new to Middleton.

"This is very much a trial run for her," he said. "Prince William, of course, is very used to this kind of public attention. He's very used to being at the center of things, having the glare of publicity, having lenses pointed at him. For Kate Middleton, this is a new experience. And they really arranged this particular one to suit her. She's very familiar with this area, as he is, because they haven't had to come very far, in fact, to perform this function. He's based at the air base just up the road, where he is a helicopter pilot, and she's been spending time with him at their house not far from that base. So this opportunity was really perfect as a first trial run, first exposure. They're often seen around in this community. They know some of the people here. The people are used to having them around and a crowd of, I would say, 300 to 500, maybe a little more than that in a very remote small, little town has come out to welcome them."

As the prince and his fiance filed in for the event, Phillips remarked, "There was some concern today, I must say, because it is so breezy here. It's held off for the moment, but it has been howling here all day, as to what that would do to Kate's wardrobe and Kate's hair. But it seems like she's got it pretty carefully tucked away there and is learning some of the royal tricks of the trade, I guess."

With the wedding a few months away, Phillips said, this is just the beginning of the couple's appearances.

He said, "We're going to be seeing them from now on."