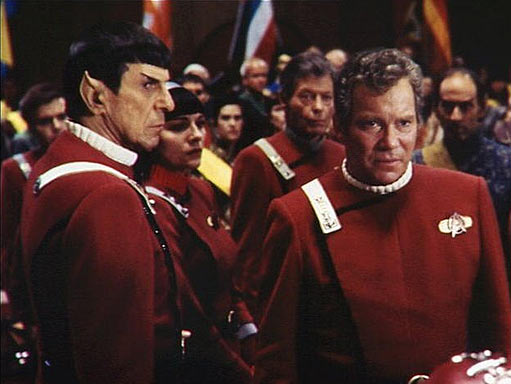 WASHINGTON --William Shatner knows a thing or two about sci-fi tech. The 85-year-old actor is best known for his portrayal of the fictional Captain James Kirk, the courageous and willful leader of the starship Enterprise from the original "Star Trek" TV series.

The show, which debuted in 1966, exposed audiences to spaceships, intergalactic space travel and a bevy of high-tech, futuristic gadgets. Now, nearly 50 years after the show came on the air, some "Star Trek" technologies exist in real life -- everything from automatic doors to cell phones. But, even though humans aren't zooming to distant worlds at warp speed, or using a "transporter" to teleport between two locations, Shatner says some of the series' most out-of-this-world tech may not always be so out of reach.

"It's not that far-fetched," Shatner told an audience on April 22 here at the Smithsonian magazine's fourth annual "Future Is Here" festival. [Science Fact of Fiction? The Plausibility of 10 Sci-Fi Concepts]

There are several examples of how real-life inventions took cues from "Star Trek." For instance, the communicator that Captain Kirk uses to talk to his crew is essentially a crude version of today's cellphones; the USS Enterprise's communications officer, Nyota Uhura, uses a futuristic-looking earpiece that today would fit right in with contemporary Bluetooth-enabled options; and the automatic sliding doors seen on the starship Enterprise must have seemed revolutionary at the time, but are now so ubiquitous most people likely take them for granted. The design of the starship's command center, or bridge, was even studied by real-life researchers, Shatner said.

"The Navy did come in and look at some of the ergonomics of the bridge, and apparently copied it," he said. "A captain of a vessel not too long ago [said] some of the bridge stuff on his ship was designed after what our designers had [done]."

Yet, with other concepts from the show -- faster-than-light travel, teleportation and time travel -- the gulf between science and science fiction seems to be as wide today as it was 50 years ago.

Conceptually, teleporting a human being from one room to another is thought to be impossible, but on an atomic scale, researchers have made significant strides in the bizarre world of quantum teleportation.

"Although a lot of the concepts in science fiction are absurd to our Newtonian minds, anything is possible because of the new language of quantum physics," Shatner said.

Quantum physics describes the strange set of rules that govern the behavior of subatomic particles, including why particles can exist in more than one place at the same time. Quantum teleportation relies on so-called "quantum entanglement," in which particles can interact and become linked so that an action performed on one instantaneously influences the other, even if they are far apart.

Quantum teleportation experiments do not dabble with matter, but rather they aim to beam photons (particles of light that have no mass) between two locations. (In other words, these experiments aren't teleporting humans anywhere, but the findings are valuable for advances in quantum computing.)

In 2015, physicists set a new distance record in quantum teleportation, beaming photons 63 miles (102 kilometers) across fiber optics, or four times farther than had been previously demonstrated.

"So, where does that leave us?" Shatner said. "Can you transport all the molecules in a human being? Apparently, it's impossible. Can you transport a replica of that person? [It's] possible, but the amount of computer energy and space is overwhelming. There's so much that we imagine in science fiction that is so delightful to think about."

Time travel is similarly a mystery, though Shatner said people are likely familiar with the sci-fi narrative that involves characters traveling through a wormhole "where time and space is curved," creating a shortcut between two locations in space or time. But, wormholes are hypothetical features, and so far, they have not been proven to exist. [The 7 Silliest Time Travel Concepts in Science Fiction]

And though faster-than-light travel has been popularized in both the "Star Trek" and "Star Wars" franchises, Albert Einstein's theory of special relativity says nothing can travel faster than the speed of light, which is 186,282 miles per second (299,792 kilometers per second) in a vacuum.

Still, Shatner said it's fun to mull over these concepts, and science fiction should always serve as a way to stoke people's imaginations. And from his perspective (at least when it comes to Hollywood), the future is an exciting place.

"Transporting is where it's at," he joked.