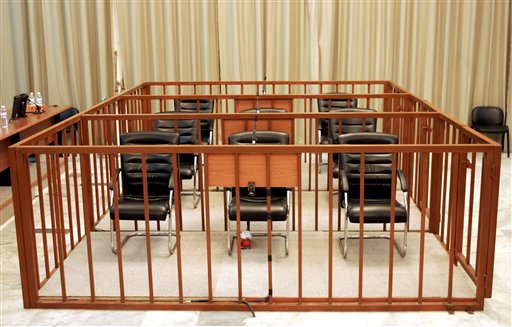 With a big run in a big game, Ricky Williams got the big record that had stood for more than two decades.

He smashed the record with a dazzling 60-yard run in the first quarter.

"I had a smile after I broke that one tackle," Williams said. "I knew I had broken the record."

After the game, Texas fans chanted "Heisman" and a two-minute video chronicling Williams' years at Texas played on the stadium TV screen.

Texas officials presented the game ball and Williams' jersey to Dorsett and two other Heisman winners -- John David Crow of Texas A&M and Earl Campbell of Texas. The jersey and the ball will be taken to the college football Hall of Fame in South Bend, Ind.

"It's special to me that those guys were on the sideline to watch me play," Williams said. "Hopefully I can be considered one of the best."

Williams came into the game needing 63 yards to break Dorsett's mark and shattered the record in dramatic fashion.

After gaining 52 yards on 13 carries, he took a handoff from quarterback Major Applewhite on first-and-10 from the Texas 40, broke a tackle by linebacker Warrick Holdman and ran down the left sideline.

He got help near the goal line when receiver Wane McGarity blocked Texas A&M's Brandon Jennings out of bounds. Williams carried defensive back Jason Webster into the end zone.

It was the longest scoring play against Texas A&M this season and typical Williams. A senior, Williams has 10 touchdown runs of 50 yards or more in his career.

"It was vintage Ricky," Texas center Russell Gaskamp said. "What a great way to break the record."

"I just congratulated him," Dorsett said. "We just embraced. I feel almost like this is my child, being able to witness something like this. This is history."

Williams finished the season with a school-record 2,124 yards, the fifth-highest single-season mark in NCAA Division I-A history. He broke his own school record of 1,893 set last season.

Williams also fumbled twice, both setting up A&M touchdowns. The last one allowed the Aggies to pull within 23-17 with 7:39 to play.

But Williams got the ball again on Texas' final drive, after Texas A&M had taken a 24-23 lead. He gained seven yards and a first down before running out of bounds to set up Kris Stockton's game-winning 24-yard field goal.

With the Big 12 title game between Texas A&M and Kansas State already set, Williams' run at the record had become the focus of Friday's game. Even Texas A&M players had said during the week they hoped Williams would break the record as long as they could win the game.

"He's one of the great backs and he had a good day," A&M linebacker Dat Nguyen said. "I told Ricky great job and congratulations."

Applewhite said he paid as much attention to the record as the score early in the game.

"I kept looking back (on handoffs) to see if that was going to be the play," Applewhite said.

"I thought we relaxed some," Texas coach Mack Brown said after Williams had set the mark. "But I wasn't going to give the record back. I wasn't going to say `Ricky, lose 60 yards so we can start all over again.'"

Friday's game was Williams' last chance at the record because bowl games do not count as part of career stats.

Williams had been aiming at the 1,928 yards needed to be No. 1 since announcing in January he was returning for his senior year. He began the year 37th on the all-time list.

Williams is the 14th major-college rushing leader since the NCAA began keeping statistics in 1937. Dorsett's 22-year reign, which began about six months before Williams was born, was a decade longer than any of his predecessors.