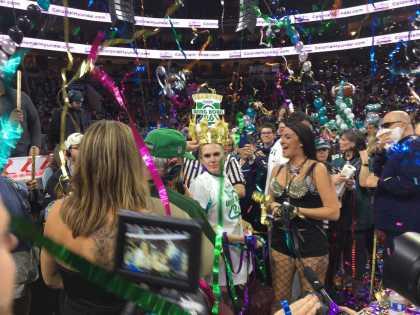 PHILADELPHIA -- Molly Schuyler has set a new world record by consuming 501 wings during Wing Bowl 26, according to CBS Philadelphia. The event took place on Friday at the Wells Fargo Center in Pennsylvania, just two days ahead of Super Bowl LII between the Eagles and Patriots.

Wing Bowl is usually Philadelphia's substitute for the Eagles going to the Super Bowl.

But Friday's competition was an unusual two-fer. It was also a rally for the Eagles on the eve of their third Super Bowl appearance.

The event was started in the 1990s by local sports radio hosts and is usually staged two days before the Super Bowl. It's turned into a huge, boozy spectacle with a parade of flamboyant contestants and a competition for women called "Wingettes."

On Sunday, the Eagles play the New England Patriots.

CBS Philadelphia reports that "Tiger Wings and Things" came in second place at 396 wings, and a Philadelphia firefighter won the "First-Responder" division.

The first and second rounds were 14 minutes each, with the top 10 eaters advancing to the second round. The final round was a speed eating two-minute blitz between the top five eaters.

Friday's win wasn't Schuyler first stab at victory. She previously won Wing Bowl 24 and Wing Bowl 22. Instead of competing in Wing Bowl 25, Schuyler faced off against El Wingador in a separate event.