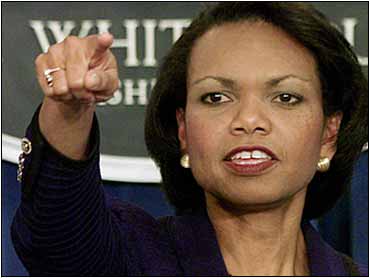 While the Pentagon is focused on the military aspects of winning the war against terrorism, other battles are also being joined. Whether one calls it learning from experience or touching all the bases, senior communications officials of the Bush administration are working full time to win the battle of public opinion, the battle for the hearts and minds of the majority of the Muslim world.

At 9:30 every morning there is a conference call involving senior officials from the White House, State Department, Pentagon and other government agencies. Their task is to get across the oft-repeated message that this is a war against terrorism, against the al-Qaida organization and against the man Secretary of State Powell calls its chairman and chief executive officer, Osama Bin Laden. And that it is not a war against Islam or Muslims.

Traditional methods of getting the message out are still being used. Press conferences are held, interviews are given on the Sunday talk shows and speeches are made, such as the one given by President George W. Bush at the U N.

But there are new approaches being tried now and they are being pushed aggressively.

Given the instantaneous nature of communications, quick responses are the order of the day. Thus, administration officials from Secretary of State Colin Powell to National Security Advisor Condoleezza Rice make frequent appearances not just on American television networks, but also on media outlets from various parts of the Middle East and Persian Gulf. The Al-Jazeera television network, often called the CNN of the Arab world, gets interviewees several times a week. Middle East Broadcasting, Egyptian TV, Jordan TV, and Al-Hayat, the Arabic language newspaper published in London have all been the beneficiaries of the new administration policies.

A former American ambassador to Syria, Christopher Ross, has been brought back to the State Department to give the U.S. response - in Arabic - to any charges by Bin Laden that the administration wishes to counter. Another former ambassador who speaks Arabic, Kenton Keith, has been assigned the task of traveling in the region to carry the American view. The U.S. Ambassador to Pakistan, Wendy Chamberlin, is available to the local and foreign press corps in Islamabad.

At the State Department the campaign is being orchestrated by Under Secretary of State for Public Diplomacy Charlotte Beers, a former Madison Avenue advertising executive who speaks about the United States as "the brand" and likes to talk about "new products" and "aspects of marketing."

One "aspect of marketing" being worked on is to persuade American Muslims to speak out against the actions of Bin Laden. Videos will be produced and distributed. Soon American officials will bseen more often on Indonesian and Malaysian television, carrying the anti-Taliban message to the large Muslim populations there.

Spokesman Richard Boucher says the effort is not aimed at trying to change the minds of Islamic fundamentalists who take their anti-Americanism to the streets in daily demonstrations, but is directed at the tens of millions who lead ordinary lives as small businessmen, teachers or workers in the Islamic world.

In the final analysis, just as important as the military objective of taking Mazer-e-Sharif, may be having the American point of view seen and heard on the evening news in Islamabad, Riyadh and Cairo and that is what is now being given equal billing.