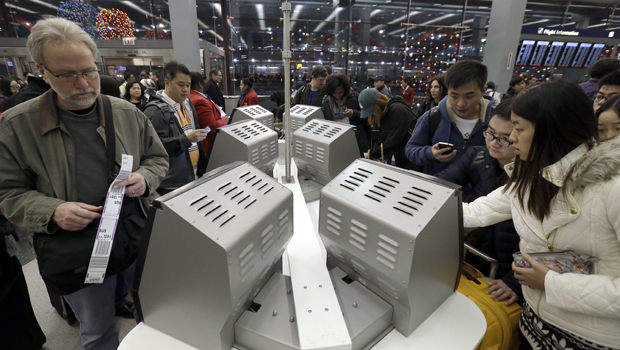 CHICAGO - A storm with a 2,000-mile footprint threatened to frustrate Christmas travelers from Texas to Nova Scotia with a little of everything Mother Nature has to offer, from freezing rain, ice and snow to flooding, thunderstorms and possibly some tornadoes in the South.

Some of the millions of people hitting the roads and airports Saturday squeaked through before any major weather hit, but as the afternoon wore on some cancellations and delays started to mount at major aviation hubs. Forecasters said roads that are passable one minute could become treacherous the next as a cold blast on the back end of the storm turns rain to ice and snow.

Making it harder for forecasters to stay a step ahead, the system was a weird swirl of wintry and spring-like weather as it passed over areas in the Midwest with freezing temperatures and places like Memphis, Tenn., where temperatures surpassed 70 degrees on Saturday.

"This is a particularly strong storm with very warm, near record-breaking temperatures in the East and very cold air in the Midwest, and that contrast is the sort of conditions that are favorable for not only winter weather but also tornadoes," said National Weather Service meteorologist Ed Danaher in College Park, Md.

The worst of the storm was expected to hit Midwest population centers Saturday night, giving some travelers a window at the start of the holiday rush to get through airports and along highways with little disruption. About 5,000 flights had been cancelled or delayed, nationwide, as of 5 p.m. EST, according to aviation tracking website FlightAware.com. Most of the disruptions were affecting flights in and out of major hubs like Dallas/Fort Worth International Airport and O'Hare International Airport in Chicago, though the weather there was not yet nasty.

It's bad timing for the estimated 94.5 million Americans planning to travel by road or air during this holiday season, which runs from Saturday through New Year's Day, and those hitting the roads for some last-minute shopping.

Darren Hall, 45, of Raymore, Mo., normally drives to St. Louis for the holiday, but decided not to risk it because of the freezing rain hitting the area and the promise of worse to come. Instead, he was waiting for a train at Kansas City's Union Station.

"You don't have to deal with all the roads. It's safer, less hassle," Hall said.

The storm had several bands of strikingly different weather.

In the Upper Midwest, forecasters expected 6-8 inches of snow north and west of Chicago and into Wisconsin.

It was already bringing significant ice accumulations to Oklahoma, southern Missouri and northern Arkansas, splitting trees and snapping power lines. That was expected to change over to snow by Saturday night.

Northern New England was bracing for an ice storm Saturday night and into Sunday that forecasters said could bring more than a half-inch of ice to parts Vermont, New Hampshire and Maine, which would make roads treacherous and cause widespread power outages.

"We've lined up hundreds of additional out-of-state line workers and tree trimmers in addition to all the GMP employees who will be working until all power is restored," Vermont Green Mountain Power spokeswoman Dorothy Schnure said.

The weather service issued a flash flood watch from Arkansas northeastward through parts of Missouri, Illinois, Indiana and Ohio, with up to 4 inches of rain projected. With falling temperatures, some of that could be freezing rain by Saturday night in the St. Louis area, weather service meteorologist Jon Carney said.

In Indiana, the National Weather Service posted flood warnings along southern and central Indiana streams and predicted the highest flood crests along the East Fork of the White River since April 2011.

While the Midwest and Plains were preparing for ice and snow, residents down South were concerned about tornadoes, which forecasters said were possible even though they are uncommon this time of year. A tornado watch was in place Saturday evening for a more than 600-mile stretch from far-East Texas to western Tennessee, which also covered parts of western Louisiana, southeast Arkansas and northwest Mississippi. That area was expected to get buffeted by rain.

Rain and ice in Oklahoma were blamed for two fatal traffic accidents and thousands of power outages. A 16-year-old boy died early Saturday after his car crashed and overturned on U.S. 64 near Tulsa, according to the Oklahoma Highway Patrol. And Oklahoma City police said a woman was killed Friday night in a collision on a slick roadway.

Forecasters said up to a half-inch of ice could accumulate across the middle of the state.

A woman sleeping in a hotel in western Michigan city of Holland was injured early Friday when a motorist lost control of his car on an icy street and slammed into the wall outside her room, MLive.com reported.

The weather wasn't the only headache maker. A baggage-equipment breakdown lasted for hours at Lambert-St. Louis International Airport, creating a backed-up line of travelers that stretched onto the sidewalk outside one of the terminals.

If there is a silver lining, it's that Christmas happens mid-week this year, AAA spokeswoman Heather Hunter said.

"When a holiday falls on a Wednesday it gives travelers more flexibility of either leaving the weekend before, or traveling right before the holiday and extending the trip through the following weekend," Hunter said.