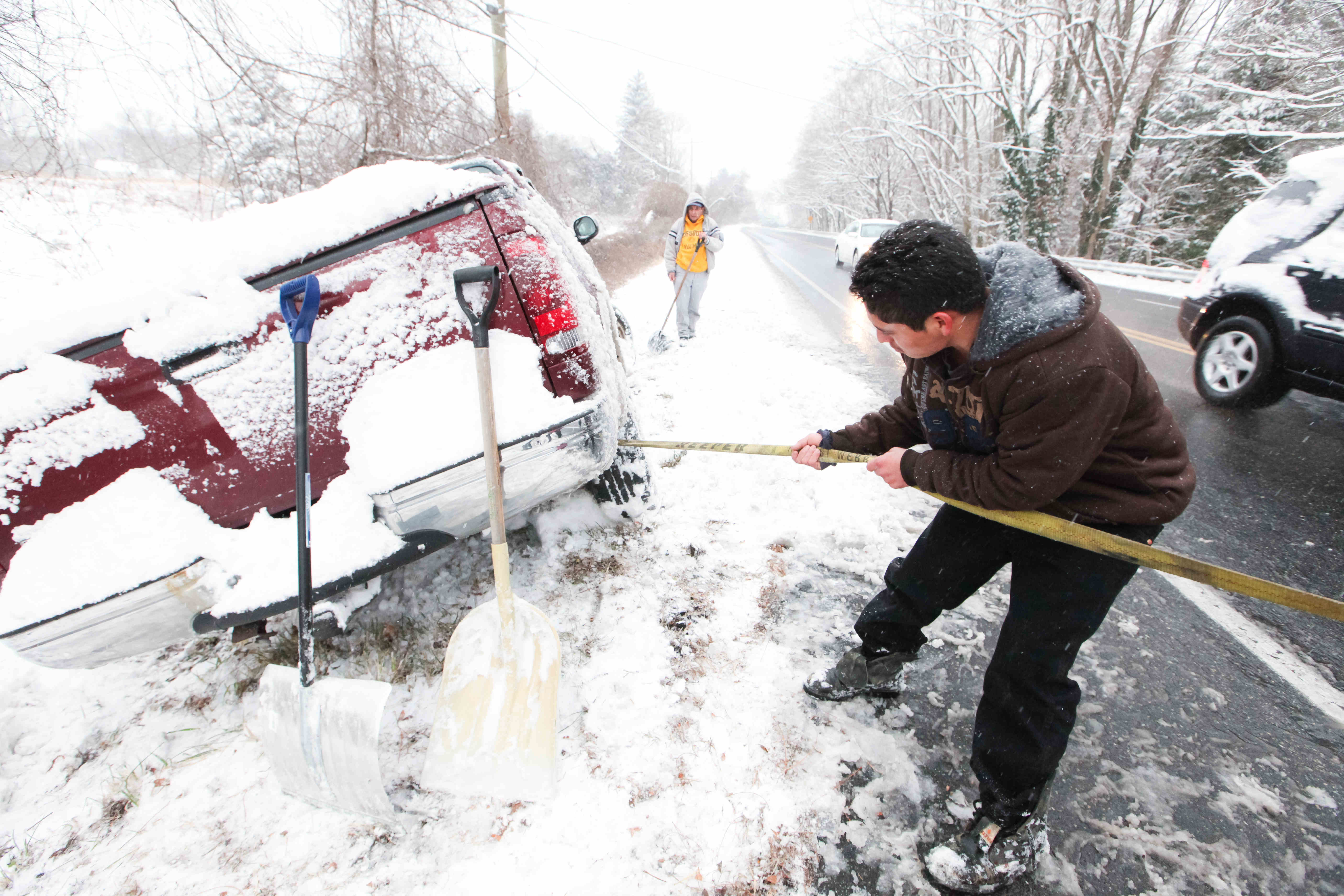 PHILADELPHIA -- A powerful storm that crept across the country dropped snow, freezing rain and sleet on the Mid-Atlantic region and headed northeast Sunday, turning NFL playing fields in Pennsylvania into winter wonderlands, dumping a foot of snow in Delaware and threatening a messy Monday commute in the northeast corridor.

The storm forced the cancellation of thousands of flights across the U.S. and slowed traffic on roads, leading to a number of accidents, including a fatal crash on the Pennsylvania Turnpike near Morgantown that led to a series of fender-benders involving 50 cars that stranded some motorists for up to seven hours. More than two dozen vehicles were involved in another series of crashes on nearby Interstate 78.

What was forecast in the Philadelphia area to be a tame storm system with about an inch of snow gradually changing over to rain mushroomed into a full-blown snowstorm that snarled mid-afternoon traffic along Interstate 95 in Pennsylvania from the Delaware to New Jersey state lines.

Paul Jones, 24, a youth hockey coach from Warminster in the Philadelphia suburbs, was on his way to a game in Lancaster when he got stuck - along with his fiancee, another coach and three players - in a major backup on the turnpike.

The roadway was "snow-covered, slick," Jones said in an interview from the car, where he was a passenger and had been at a standstill for more than an hour.

"People are in and out" of their vehicles, he said. "Kids are having a snowball fight on the side of the road, making snow angels, people are walking their dogs."

The National Weather Service said the low pressure system from North Carolina north to New England was being fed by disturbances from the southwest and moist air off the Atlantic.

A foot of snow was reported in Newark, Del. Philadelphia International Airport received 8.6 inches Sunday, more than it had all of last year. Other areas received far less: a little over an inch was reported in Pennsylvania's Lehigh Valley, which usually is hit harder than downtown Philadelphia.

The forecast for early Monday remained up in the air for the northeast, depending on how quickly the system moves and temperatures rise, according to the National Weather Service.

The expectation was for another weather system moving out of Virginia to follow the same path as Sunday's storm overnight. It was expected to dump icy drizzle and eventually freezing rain from Philadelphia northward through the New York City area and into Boston, National Weather Service meteorologist Greg Heavener said.

"The commute for people in the Philadelphia area and north, to northern New Jersey and New York will likely be disrupted by freezing rain," Heavener said.

The snow fell so heavily in Philadelphia on Sunday that yard markers at Lincoln Financial Field - where the Eagles beat the Detroit Lions - were completely obscured. It was almost as bad in Pittsburgh, where the snow intensified after the opening kickoff.

Philadelphia fan Dave Hamilton, of Ivyland, layered up for the game, wearing an Eagles shirt topped with an Eagles sweatshirt and Eagles winter coat.

"Twenty-seven years I've been a season-ticket holder, I've never seen snow at the game like this," he said. "It just kept coming down. But we are all having fun out there."

The tracking website Flightaware.com estimates more than 2,500 flights were cancelled nationwide as of Sunday evening and more than 6,000 flights were delayed. That follows two days of similarly difficult travel conditions.

Philadelphia International Airport had a temporary ground stop Sunday afternoon with snow totals around 4 to 6 inches. Spokeswoman Stacey Jackson said a number of passengers were expected to remain in the airport overnight since area hotels had been full for several days. She said staff would hand out pillows and blankets to travelers to make them "feel at home even though they are not."

Air passengers in the Washington-area experienced increasing delays as the season's first real snowstorm set in. The Metropolitan Washington Airports Authority said many flights had been delayed at Dulles International and Ronald Reagan Washington National airports.

In Maryland, a chain-reaction accident on Interstate 81 in Washington County involving more than 20 vehicles delayed snow removal efforts for hours. The highway was closed for more than three hours after a tractor-trailer ran into the median to avoid cars that had spun out. It was hit by another tractor-trailer that overturned and spilled its load. Several other tractor-trailers ran off the road and jackknifed as their drivers tried to avoid the crash.

North Texas started to thaw out slightly Sunday after two days of a near standstill with icy roads and low temperatures. About 400 departures from Dallas-Fort Worth International Airport were canceled Sunday. It will likely be a couple of days before the ice that's coated the region melts completely.

The snowstorm raised fears about a potentially dangerous Monday morning commute, with snow-laden cars and perilous, icy roads. New Jersey's new U.S. senator, Cory Booker, tweeted a promise to a Mount Holly resident to help him shovel out his car if he still needed the help in the morning.

But the heavy snow wasn't limited to the East Coast. A snowstorm that hit along the Utah-Arizona border left hundreds of travelers stranded on Interstate 15 overnight into Sunday. The Arizona Highway Patrol said passengers in about 300 vehicles became stranded after up to 10 inches of snow and slick road conditions prompted the closure of part of the highway. There were no immediate reports of serious injuries.