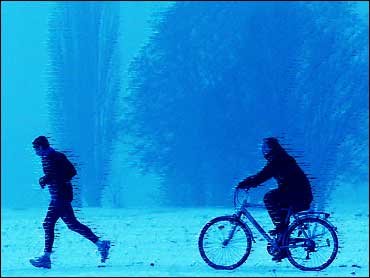 Exercising outside during the winter presents unique health risks.

But an ounce of prevention is worth a pound of cure, and The Early Show health contributor Dr. Mallika Marshall offered tips Friday on staying safe while exercising outdoors this time of year.

Marshall advises that you skip exercising if the wind-chill factor is minus-22 degrees Fahrenheit or lower. In that case, work out indoors instead. And if you're particularly susceptible to the cold, such as if you have underlying heart disease, you need to be more careful.

Among the special risk factors involved in outdoor winter workouts are frostbite, dehydration and asthmas attacks.

When people think of frostbite, they usually think of mountain climbers or skiers who've been stranded for days out in the snow. But each year, thousands of other Americans suffer from frostbite. Frostbite normally affects the fingers, toes, nose, earlobes, chin and genitals. Your tissue actually freezes, and in some cases freezes to death, which can cause permanent damage or even create the need for amputation.

To prevent frostbite, wear layered clothing. Layers are much more effective at keeping you warm than one bulky layer, such as a snowsuit. The air spaces between the layers trap your body's warmth. You'll also want to avoid wearing cotton, because it tends to keep moisture at the level of the skin, which has a cooling effect. Synthetic products that pull moisture away from the body, such as Gortex, are your best bet.

Also, cover extremities, meaning your feet, hands, face and head. Try wearing two pair of socks and make sure your shoes aren't too tight. If you wear a mask, make sure it's not too tight, and don't forget mittens or gloves.

As for dehydration, when it's very cold outside, there is little humidity in the air. So you're not getting the moisture that you would breathe in while running on a warm spring day. And you'll lose a lot of water through sweat, even though you may not feel it. That's why it's very important to pre-hydrate. Drink at least 8 to 10 ounces of water before you work out. And remember, when you're cold, you tend to feel less thirsty.

As far as asthma is concerned, it results from widespread narrowing of the breathing tubes. Breathing cold, dry air makes some people's airways in their lungs narrow, triggering an asthma attack. Even people who don't have asthma can have breathing problems while exercising in the cold.

To prevent asthma attacks, warming up for at least 10 minutes before you go for a run can be enough to prevent an attack. Wear a face mask or scarf around your mouth to help warm and moisten the air that you breathe in. These steps are very important when it's cold outside. A sudden change in breathing patterns, such as going from fast to slow, also can trigger an attack.