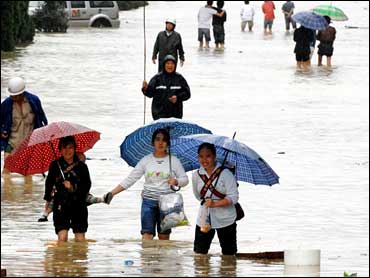 Wipha was downgraded to tropical storm status after it tore into the coast south of the city before dawn. By mid-afternoon, it was traveling northward to the west of Shanghai, as clouds whipped past its many skyscrapers.

Authorities in Shanghai and nearby provinces evacuated some 2 million people, mostly from coastal regions, boats and unsafe housing. One Shanghai man was electrocuted when he stepped in a puddle electrified by a light box in the northern part of the city, local media reported.

The storm destroyed 669 houses and disrupted power to more than 100 communities, the official Xinhua News Agency reported, citing the Ministry of Civil Affairs.

Shanghai, a city of 20 million, closed schools, ferries and other transport links following forecasts of torrential rains and strong winds.

The Meteorological Bureau in Zhejiang province reported that Wipha was downgraded into a tropical storm early Wednesday after it made landfall and its sustained wind speeds dropped below 74 per hour.

By midafternoon, Wipha's wind speed was reported at about 60 miles per hour.

The storm hit land near Cangnan in southern Zhejiang province, some 250 miles south of Shanghai.

On Tuesday, one worker was reported killed and another seriously injured as the fringe of the typhoon lashed Taiwan, knocking down scaffolding at a highway construction site in Taipei, Taiwan's Disaster Relief Center reported.

Organizers of the women's World Cup rescheduled Wednesday's Shanghai match between Norway and Ghana to Thursday and moved it to the neighboring city of Hangzhou. Three Wednesday games were rescheduled for Thursday, to allow them to be played simultaneously with other final group matches.