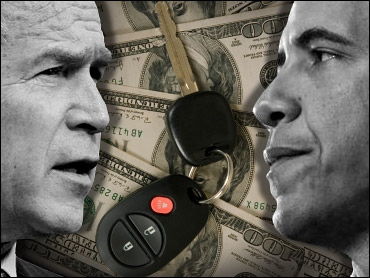 President Bush's $17 billion lifeline to General Motors Corp. and Chrysler LLC means neither company will perish while he occupies the White House, yet leaves the ultimate fate of the once-proud auto industry up to the incoming Obama administration.

Little more than a month from leaving office, Mr. Bush framed his rescue as "a step that we wish were not necessary," but one that saved the country from a disastrous economic blow.

It was also one that looked past public opposition, included a key concession of his own and spared a gridlocked Congress the consequences of its own futility.

For that he drew considerable praise from Democrats, Chrysler and General Motors, the distinctly more tempered appreciation of the United Auto Workers union and the scorn of fellow Republicans all the while preserving complete freedom for his successor to start anew on Jan. 20.

Whatever the terms, targets or requirements of the loans that Mr. Bush's Treasury Department laid out, administration officials said President-elect Barack Obama was free to change them at his will.

Because the loans were ordered by the administration, rather than mandated in legislation, the money flows first and the repayment terms are literally written on paper that the new president can rewrite. He can ease or toughen provisions in future negotiations.

In a likely harbinger, the autoworkers union became first in line to seek changes.

Mr. Bush, no particular friend of organized labor, had wanted the UAW to agree to wage and benefit concessions that would make union workers equal in compensation to employees turning out Japanese cars at factories in the United States.

Sen. Carl Levin, D-Mich., objected, and Treasury Secretary Henry Paulson agreed to a change that said the compensation could be competitive, rather than equal.

Not yet satisfied, the union's Alan Reuther said, "The UAW believes these provisions unfairly single out workers. They were not part of the agreement that the White House entered into with the Congress. We believe they should be removed."

It's the type of detail likely to come up again and again as the new administration tries to assure the survival of the auto industry without antagonizing organized labor, a key Democratic constituency.

"I just want to make sure that when we see a final restructuring package that it's not just workers who are bearing the brunt of that package," Mr. Obama said.

He didn't say so, but some Democrats have already declared General Motors CEO Rick Wagoner must go, for example.

It's unlikely any Republicans will be surprised by such maneuvering. But after 14 years of controlling at least one branch of government, they are soon be spectators.

Mr. Bush's big concession came when he agreed to help the auto industry with funds from the Troubled Asset Recovery Program, the $700 billion bailout that Congress approved last fall to stabilize the financial industry.

He had long said his administration lacked authority to dip into TARP to help the automakers. But that insistence crumbled a week ago when Congress gridlocked over legislation.

But there is a catch, at least as long as Mr. Bush's version of the loan remains in force.

Of the $17.4 billion in the loan package, $13.4 billion is available this month and next. The remainder will be used only if the administration is free to tap the $350 billion that remains in the financial industry bailout fund. And that can only happen if Congress first votes on releasing the funds.

It's a vote Democrats would just as soon not take, given widespread public opposition to bailouts.

In concluding that he had to step in, Mr. Bush also set aside his free-market principles, though on a far smaller scale than when he agreed to bail out big banks last fall.

Only a day earlier, he had spoken favorably of bankruptcy as the preferred way to let companies bear the consequences of their decisions. And yet, he said, "these are not ordinary circumstances."

The fact that he was left with no choice reflected economic reality as well as his political weakness in the final weeks in office.

While Mr. Bush and Democrats agreed rather easily on a rescue bill earlier this month, Senate Republicans wanted no part of it.

Several officials said that despite an invitation to join those talks, Senate Republican Leader Mitch McConnell of Kentucky decided not to send representatives.

That way, when the White House and Democrats reached their compromise, he was free to walk away.

He did, to the embarrassment of the White House, which watched from the sidelines little more than a week ago as Sen. Bob Corker of Tennessee and other Republicans sought unsuccessfully to wring far-reaching concessions from the UAW.

When their bid failed, Senate Republicans killed the legislation that Democrats and the administration had written.

The UAW seemed unperturbed, calculating that Mr. Obama would be a less demanding master.

They may be right.