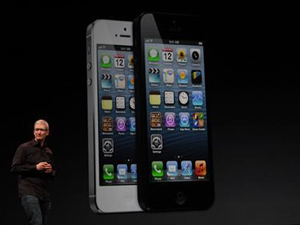 (CNET) Apple (AAPL) made the case today that its newly unveiled should take its rightful spot atop the smartphone food chain.

But for seemingly the first time, it's not exactly a slam dunk that Apple's device belongs there.

When the iPhone 4 debuted in June 2010, it was the phone to own. The Android phenomenon hadn't taken over yet, and Samsung Electronics was still finding its way. Established handset vendors Nokia and Research In Motion, meanwhile, were at the beginning of their quickly accelerating declines. The momentum was behind Apple and CEO Steve Jobs.

Following a lengthier-than-expected upgrade cycle to the incrementally better , and now the iPhone 5, things have changed. Android is pervasive, and Samsung now has a significant lead in the smartphone business with a franchise, the Galaxy S, that generates nearly as much buzz as the iPhone. Motorola is a part of Google. Nokia and RIM, meanwhile, are re-arming themselves with brand-new mobile platforms and are ready to fight to reverse their fortunes. And Tim Cook now has the reins of Apple.

Most importantly, the iPhone is no longer leaps and bounds better than the competition and the obvious choice for consumers. Instead, rivals have caught up. The iPhone 5's main features -- a larger display, access to 4G LTE, and an improved camera -- can already be found on Android smartphones. For the first time, Apple can no longer stand apart from its smartphone competitors as a clear leader; it's right there in the middle of the fray.

"Whilst the company is still reaping the rewards of the brand equity of the iPhone, consumers are notoriously fickle when it comes to buying handsets," said Ovum analyst Adam Leach. "Without the continued innovation which we are accustomed to with Apple, the company risks losing consumer appeal."

While it may no longer be the obvious choice for smartphone buyers, the iPhone 5 will still shake up the market. Apple's cachet and its world-beating market presence still means every other company needs to watch out.

The iPhone 5 debuted today at the usual hype-infused Apple event, with Cook and his team taking steps to reestablish the iPhone's leadership role in the world. Executives talked up the various upgrades and new features, with Cook working to leave the impression that Apple's products remain a step up from those of the competition.

"Only Apple could create such amazing software, hardware, and services and put them together into such a powerful, integrated solution," Cook said at the event.

In hindsight, the competition had it easy with the iPhone 4S, which launched last October but was largely seen as a placeholder until the arrival of the iPhone 5. It featured the same design as the iPhone 4 and only software and internal hardware improvements. Apple managed to juice sales by expanding its distribution to even more wireless carriers, but despite impressive sales, it clearly couldn't sustain the momentum or buzz of previous iterations of the smash-hit product.

That left other high-profile phones to make their mark, including the Motorola and Samsung's Galaxy Nexus.

Apple's vulnerability is further illustrated by the shift in the market, which has moved in Samsung's favor. Samsung overtook Apple for the smartphone crown in the third quarter of last year and has only extended its lead. In the recent second quarter, Samsung owned nearly 30 percent of the global smartphone market, while Apple had 18.8 percent, according to Gartner. Apple managed only to eke out a gain, while Samsung nearly doubled its share.

Previous iPhones have all been smash hits, leading the market for an inordinately long amount of time. The iPhone 4S, despite suffering a relatively quick loss of buzz, was the leading smartphone at each of the national carriers through the summer before ultimately getting dethroned by the Galaxy S3 in August.

So even if the iPhone 5 enters a much more competitive field, it's still poised to break records and surpass its predecessors, largely owing to the growing pent-up demand for the product. Sales of the iPhone have cooled in recent months, and Apple has attributed that slowdown to anticipation for the new device.

The expectations are high. Apple could sell 170 million iPhone 5 units, according to Asymco analyst Horace Dediu, noting that the new device should sell as much as all of the previous generations combined. JP Morgan believes the iPhone 5 could add half a percentage point to the country's gross domestic product growth.

Another difference from the iPhone 4 launch: much wider availability. Over the last year, Apple has worked to make the iPhone accessible to a surprisingly larger number of carriers, including regional wireless providers such as Cincinnati Bell and prepaid carriers such as Virgin Mobile and Cricket Wireless. Overseas, the company has also worked to expand its distribution, and is expected to eventually sign a deal with China Mobile to better tap the world's largest market.

Apple Stores across the country will undoubtedly see long lines as consumers and Apple fanboys scramble to buy the latest iPhone.

But it will be interesting to see if the longer term momentum and excitement goes the way of the iPhone 4 or the iPhone 4S. At stake is the base of consumers that don't yet own a smartphone. China is considered a key growth driver for Apple, but nearly half of the consumers in the U.S. still don't own a smartphone yet. Whether Apple can sustain its buzz will help sway the next wave of consumers, determining whether they buy an iPhone or Android smartphone, or even an alternative such as a BlackBerry or a Windows Phone.

Consumers weren't the only ones tuning in to Apple's presentation today; the entire industry is likely on Apple watch.

That's because the iPhone is expected to shake up the entire wireless industry, as well as hurt or give a boost to adjacent industries such as the PC or chip businesses.

Apple's competitors have to be nervous. The Galaxy S3 has been riding high on nearly every carrier, but that reign will undoubtedly end with the iPhone 5 getting into the game.

Rivals such as HTC, and LG could continue to struggle as their own coming announcements could get overshadowed by the iPhone launch. The same goes for the recently unveiled Nokia and , as well as Motorola's Droid Razr HD, , and the . Whatever buzz they've been able to generate -- or hope to generate -- could get lost in the iPhone 5 hype cycle.

The wireless carriers will also brace for the impact of the latest iPhone. While the iPhone has meant more customer growth and loyalty for the carriers, it has come at a cost in the form of subsidies paid to Apple for the pricey device (an unsubsidized iPhone, for instance, can cost more than $600). But because of the wide availability of the iPhone at multiple carriers, the phone is no longer considered an advantage to carry, but a must-have product to compete.

Other winners include radio maker Qualcomm, display-maker LG, and even rival Samsung, which provides the graphics memory, according to JP Morgan analyst Mark Moskowitz. PC makers, which are already ceding ground to tablets, could be hurt as consumers spend their disposable income on the iPhone instead of a new laptop.

Ultimately, the big winner is Apple, which gets to dominate the smartphone conversation heading into the holiday season.

But whether consumers will still be talking about the iPhone or the next big smartphone in a few months is still up in the air.

This post by Roger Cheng originally appeared on CNET.