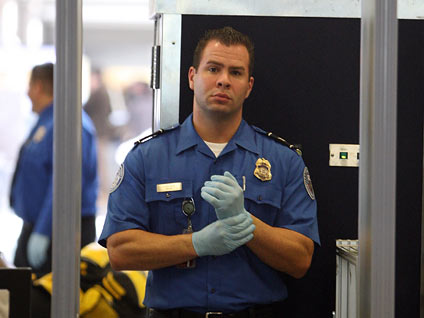 Despite news reports about overzealous pat-downs and other indignities tied to the Transportation Security Administration's new body scanning procedures, most Americans say they support use of the procedures - though, crucially, support may be slipping.

Still, the uproar has prompted some to ask - albeit tentatively in some cases - if the time had come to consider using racial and other profiling as a security measure.

Complaining last week about the new procedures, conservative Washington Post columnist Charles Krauthhammer wrote that "The only reason we continue to do this is that people are too cowed to even question the absurd taboo against profiling - when the profile of the airline attacker is narrow, concrete, uniquely definable and universally known."

At a debate last night hosted by Intelligence Squared US, syndicated columnist Deroy Murdock argued that "we want the TSA and others to recognize that the current threat to passengers and airliners comes almost exclusively from one source, and we all know what it is, young males between about 18 and 35 who practice a fundamentalist strain of the Islamic faith, and generally hail from the Middle East, as well as largely Muslim nations in Africa and South Asia."

Countered former Homeland Security chief Michael Chertoff: "The problem with using racial and religious profiling is it takes you down a road to looking at people who you don't need to look at and avoiding looking at people that you should look at. The fact is it would be an engraved invitation to al-Qaeda to recruit exactly the kind of people who don't fit the profile..."

As the New York Times reported Monday, some are looking to Israel - where profiling is just one among the many airport security tactics that make civil liberties defenders cringe - for guidance on airport security. The system is extremely restrictive by American standards, and stories of over-the-top searches and overzealous questioning are common. (Here's one that involves a murdered laptop.)

"My experience leaving Tel Aviv was by far and away the most unpleasant encounter I've ever had with airport security officials in the decade," blogger Matthew Yglesias wrote. "As best I could tell, things went pretty smoothly as long as you were (a) Israeli, (b) traveling with an Israeli, or (c) traveling with some kind of well-established tour group."

Yglesias said that it took three hours for him to get from his initial security check to the airport's food court, and added that the Jewish member of his group "had the easiest time" while the black woman in the group "had the hardest time."

Many of those now suggesting that profiling may be effective are stressing that it should not necessarily be grounded in race. LAPD lieutenant Sunil Dutta wrote in the Los Angeles Times Monday that while "true" racial profiling "both illegal and immoral," it is useful and legitimate for police officers to "go out in the field looking for Latino males of a certain age who dress in a particular way, have certain tattoos on their bodies and live in an area where street gangs flourish."

"Does that mean they are engaging in racial profiling? No," he writes. "They are using crime data to identify possible suspects. Ethnicity is just one of many criteria they consider."

That's somewhat similar to the argument of Republican Rep. Jason Chaffetz of Utah, who is calling for "behavioral profiling" at airports not based solely on religion or race, and Republican Rep. Pete Hoekstra of Michigan, who noted, "the words profiling are toxic from a political standpoint."

"But the bottom line is there are certain parameters that you can use in profiling that would narrow the scope of who you really target," he continued. Hoekstra added that "you do it everywhere in life -- it only makes sense. You just need to make sure you do it right."

Some lawmakers are less tentative in their support: Sen. James Inhofe, R-Okla., says explicitly, "I know it's not politically correct to say, I believe in racial and ethnic profiling."

In April, CBS "Sunday Morning" explored the question of what a terrorist looks like - and found there aren't necessarily easy answers. Oklahoma City bomber Timothy McVeigh, self-proclaimed "Jihad Jane" Colleen LaRose, and "American Taliban" John Walker Lindh, all do not fit into the standard terrorist profile.

But a Washington Post-ABC News poll released today does find support for some types of profiling. Asked "would you support or oppose the TSA profiling people, using available information about passengers in order to determine who gets selected for extra security screening at airports," 70 percent said they would support such efforts.

A whopping 86 percent, meanwhile, say "personal behavior" should be something screeners take into account - which means the American public seems to assume that terrorists aren't very good at keeping their cool. Seventy-eight percent said travel history should be a factor, while 55 percent said nationality should be one - which, it should be noted, is at least somewhat ties to race.

It should be noted that profiling is already taking place, in the form of "behavior detection" -- essentially, spotters use facial expressions and body language to identify possible threats. But as CBS News reported in May, the program has been criticized for the fact that despite a $200 million price tag last year, it has not caught a single terrorist.

During the Intelligence Squared US debate, author and former CIA case officer Robert Baer, who supports the use of profiling, suggested that it is a necessary, if blunt, tool.

"I would prefer if we had the opportunity and we had the intelligence to base all of our profiling on behavior, tickets, flight lists, the history of people, digital databases, credit checks," he said. "But right now, this country does not have that capacity to run an algorithm through every single flight that comes into this country....Nor can it even keep track of the people that are in this country. And this forces the police and TSOs to fall back on a very primitive unattractive weapon. But it's the only weapon we have at this point until our intelligence gets better."

Critics say that racial profiling goes against the American ideal in which you are judged for the content of your character. Debra Burlingame, whose brother Charles Burlingame III was pilot of the airplane that crashed into the Pentagon on September 11th, asked the debate audience to consider what it would be like to be treated like a terrorist every time you want to take a flight. While profiling could make security procedures easier for many travelers - those who don't look like a threat - it would also make them far harder for those who fit the profile, the vast majority of whom have no intention of committing a crime.

And Nihad Awad, of the Council on American-Islamic Relations, told CBS News that racial profiling is simply un-American.

"...have we learned any lesson from targeting minorities in America? Targeting people because of who they are is wrong, counterproductive," said Awad. "And we look always back in shame on our history."