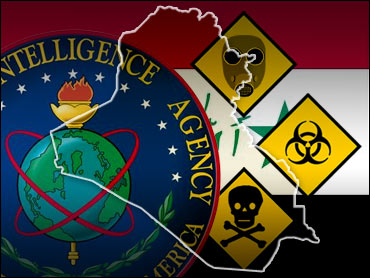 Defense Secretary Donald Rumsfeld on Wednesday told Congress that the U.S. invaded Iraq not because of a new threat of weapons of mass destruction but because of new fears they might be used.

"The coalition did not act in Iraq because we had discovered dramatic new evidence of Iraq's pursuit of weapons of mass murder," Rumsfeld said. "We acted because we saw the existing evidence in a new light through the prism of our experience on Sept. 11."

Rumsfeld's statement came as Democrats in the United States, and opposition lawmakers in Britain and Australia, called for inquiries after the White House admitted that one of its charges against Iraq was based on bad intelligence.

The White House on Monday withdrew the claim — made in President Bush's State of the Union speech — that intelligence obtained by Britain indicated Iraq had tried to buy uranium from Africa.

In justifying war, the administration made many allegations that Iraq had programs to make chemical, biological and nuclear weapons. No such weapons have been found.

The administration says the Niger claim was only one part of the argument for military action, and only a portion of the evidence that Saddam Hussein was pursuing nuclear weapons and possibly tapping African countries as sources of fuel.

Mr. Bush on Wednesday defended his argument for war.

"There's no doubt in my mind that when it's all said and done the facts will show the world the truth," he said. "There's going to be, you know, a lot of attempts to try to rewrite history, and I can understand that. But I'm absolutely confident in the decision I made."

Democrats have seized on the White House retraction to push again for a full, public inquiry into prewar claims. Currently, three Congressional committees are pursuing limited reviews of the intelligence.

"It's a recognition that we were provided faulty information," Senate Democratic Leader Tom Daschle of South Dakota said Tuesday. "And I think it's all the more reason why a full investigation of all of the facts surrounding this situation be undertaken."

Republicans countered that the president had done the right thing by admitting the error, and said the case for war was broader than the claim about Niger.

But questions linger over how the uranium charge got into the president's State of the Union speech. In the January 28 address, the president said that, "The British government has learned that Saddam Hussein recently sought significant quantities of uranium from Africa."

This was apparently based on a British intelligence dossier made public in September.

The evidence in question referred to a supposed deal between Iraq and Niger, though neither the president nor the British identified that country in public.

The president's statement was incorrect because it was based on forged documents from the Niger, White House spokesman Ari Fleischer said Monday.

The White House retraction followed assertions by an envoy sent by the CIA to Africa to investigate the allegations. The envoy, Joseph Wilson, a former U.S. ambassador to the West African nation of Gabon, was dispatched in February 2002 to explore whether Iraq tried to buy uranium from Niger.

Writing in a New York Times op-ed piece, Wilson said it did not take him long "to conclude that it was highly doubtful that any such transaction had ever taken place."

In an interview on NBC, Wilson insisted his doubts about the purported Iraq-Niger connection reached the highest levels of government, including Vice President Dick Cheney's office.

Fleischer said Monday that Cheney did not request information about Wilson's mission to Niger, was not informed of his mission and was not aware of it until press reports accounted for it.

However, the BBC is quoting a CIA official as saying the agency told the White House about the doubts raised by Wilson. The White House says it gets multiple reports each day from various agencies, and says there is no evidence that it was warned before the State of the Union that the Africa claim was dodgy.

According to the New York Times, there were other doubts about the Niger claim. When the State Department passed on the Niger document to the International Atomic Energy Agency, it warned: "We cannot confirm these reports and have questions regarding some specific claims." The IAEA soon determined the documents were forgeries.

Administration officials yesterday said they had other reasons to suspect Iraq was reconstituting its nuclear program, and other indications it was trying to get uranium from Africa.

The additional evidence pointed to Congo and Somalia as possible sources, but was not considered solid enough to discuss publicly, according to The Washington Post.

National Security Council spokesman Michael Anton said beyond the Africa links, there was evidence to suggest Iraq was restarting its nuclear program. But the IAEA said it found no evidence to substantiate that charge.

For their part, the British are standing by their initial claim, saying their evidence of Iraq's intentions in Niger comprised more than the forged documents, the Times of London reports.

Also in Britain, Conservative Party leader Iain Duncan Smith has challenged Prime Minister Tony Blair to apologize to the House of Commons, following a parliamentary report that concluded that Blair unintentionally misled lawmakers about the origins of intelligence material released in February. Blair on Wednesday denied that he misled lawmakers.

Former head U.N. weapons inspector Hans Blix said Wednesday that claims by Blair that Iraq had been able to deliver weapons of mass destruction in 45 minutes were "far off the mark."

Elsewhere Wednesday, the fallout from the White House reversal on the African claim spread to Australia, where opposition lawmakers launched fresh verbal attacks on Prime Minister John Howard on his rationale for sending troops to Iraq.