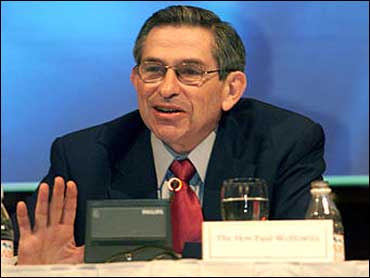 Deputy Defense Secretary Paul Wolfowitz, one of the architects of the war in Iraq, told interviewers Sunday that intelligence on Iraq's alleged weapons and suspected links to terrorism was "murky."

Wolfowitz said that lack of clarity was always part of analyzing spy data, and said Sept. 11 was proof that it is sometimes necessary to draw conclusions from incomplete data.

But the defense official's statements could fuel criticism that the Bush administration failed to tell the public of doubts about Iraq's alleged threat.

The Times of London reports the statements might pose new problems for British Prime Minister Tony Blair, who faces tough questions over the main rationale for the war, that Iraq possessed illegal weapons.

No weapons have been found in almost three months since the end of major combat.

Asked whether any evidence had been uncovered to back up allegations of links between Baghdad and al Qaeda on CBS News Face The Nation, Wolfowitz said, "We're going to be unveiling secrets in Iraq day after day after day."

"Is this a murky picture? Yes, it's murky. Information about terrorism is inevitably murky because terrorists hide, and because you get an awful lot of information that's simply not true," he said.

"But, stop and think about what the 9/11 report is saying. It's saying that we should have connected these murky dots ahead of time," he said, referring to a report last week on intelligence lapses before the 2001 terrorist attacks.

"The lesson of September 11th," Wolfowitz said, was that "We can't deal with terrorism after the fact."

Wolfowitz made almost identical comments to Fox News, when asked about al Qaeda, and NBC, when questioned about Iraq's alleged weapons.

On NBC, he addressed the debate within the Bush administration over the extent of Iraq's nuclear program. A National Intelligence Estimate released two weeks ago showed the State and Energy Departments disagreed with some administration assessments.

"It was unanimous that there was a program, there was disagreement about how far along it was, or how long it would take him to get there," Wolfowitz said.

But Wolfowitz's description of the intelligence as "murky" differed sharply from the way the spy data was characterized before the war.

In his Feb. 5 presentation to the Security Council, Secretary of State Colin Powell told delegates, "What we're giving you are facts and conclusions based on solid intelligence."

Since the White House admitted in early July that it was wrong for the president's State of the Union to include a claim that Iraq tried to buy uranium in Africa, the administration has been on the defensive about its prewar claims.

Sometimes that defense has shifted.

On July 7, then-White House press secretary Ari Fleischer said the statement was largely based on evidence of Iraqi activities in Niger that turned out to be forged.

By that weekend and later, aides said the line was based on a broader body of intelligence involving uranium shopping in several African countries and thus might be accurate.

The White House, meanwhile, insisted it was unaware before the Jan. 28 speech that there were problems with the intelligence underlying the claim.

But Stephen Hadley, No. 2 on the president's national security team, disclosed Tuesday that two CIA memos and a call from CIA Director George Tenet had persuaded him to take a similar passage out of a presidential speech in October — and that he should have done likewise when it turned up again in State of the Union drafts.

Hadley said he had forgotten about those objections by the time the State of the Union speech was being crafted.

National security adviser Condoleezza Rice and other aides pointed repeatedly to the fact that doubts about the intelligence appeared in a footnote, written by the State Department, buried deep in the top-secret National Intelligence Estimate.

That footnote was thus not read by the president, Rice or other top aides, said a White House official, on condition of anonymity.

However, newly declassified portions of the NIE, on which the speech was based, show that the very first paragraph of the report's "Key Judgments" had a prominent reference to an addendum containing the State Department's "alternate view" of intelligence on Iraq's nuclear pursuits.

White House communications director Dan Bartlett said there was no debate between the White House and the CIA over the State of the Union line in question. The only discussion was over the intelligence agency's signoff on attributing the line to the British.

But Bartlett's statements contradict earlier accounts by Rice and Tenet, as well as a CIA official who testified before Congress.

"Some of them may have been moved out on the market and may be moving around," he said. "We did not prepare to bring the Iraqis into control of their own government more quickly."