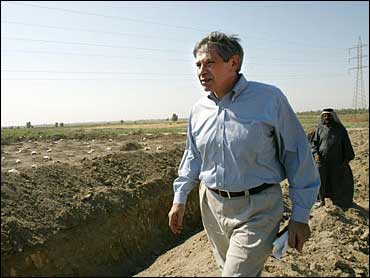 Amid doubt over the allegations about Iraqi weapons that led to war, Deputy Defense Secretary Paul Wolfowitz now says finding weapons of mass destruction in Iraq is a secondary concern.
One of the architects of Bush administration policy on Iraq, Wolfowitz told reporters that he's more concerned about getting the Iraqi government up and running.

No illegal weapons have been discovered so far after weeks of searches in Iraq. The Bush administration has come under fire after admitting it was improper to charge in the State of the Union speech that Iraq had tried to obtain uranium from Niger.

White House and CIA officials have been at odds over trying to explain the lapse. Other claims — that Iraq could arm chemical and biological weapons in 45 minutes, that Baghdad had active ties to al Qaeda — have also come under new scrutiny.

The intelligence dispute is breathing new life into anti-war groups, The Washington Post reports. Some 400,000 people, hailing from all 50 states, have signed a petition in the past three weeks calling for a probe into the prewar claims.

Across the Atlantic, President Bush's chief ally in the war, British Prime Minister Tony Blair, is also under pressure. He said Tuesday that going to war with Iraq was "the right thing to do" and said he had no doubt Baghdad tried to develop weapons of mass destruction.

"In terms of the security of the world and the suffering of the Iraqi people, it is better to be rid of Saddam Hussein," Blair told students at elite Tsinghua University as he neared the end of a marathon Asian tour.

In an interview Monday night aboard an Air Force jet en route to Washington following a five-day tour of Iraq, Wolfowitz said the task of settling the weapons question is in the hands of U.S. intelligence agencies.

"I'm not saying that getting to the bottom of this WMD issue isn't important. It is important. But it is not of immediate consequence."

Portions of a National Intelligence Estimate (NIE) prepared in Octobeer, and released publicly on Friday, suggest there were gaps in knowledge overall and disputes among U.S. agencies on specific points.

While "most agencies" believed Saddam had imported aluminum tubes for the purpose of refining uranium for nuclear weapons, the Department of Energy disagreed, the NIE said.

The director of the Air Force's office of intelligence did not agree with the assessment that Iraq was developing unmanned aerial vehicles primarily for delivering chemical and biological weapons.

The State Department's intelligence office argued that "the activities we have detected do not …add up to a compelling case that Iraq is currently pursuing…an integrated and comprehensive approach to acquire nuclear weapons."

The report ranked findings as to whether they carried high, moderate or low confidence. It said with high confidence that Iraq had chemical and biological weapons and was continuing programs to produce them.

Some of the largest doubts concern the circumstances under which Iraq would use its allege illegal weapons, and whether it would team up with terrorists.

Saddam "appears to be drawing a line short of conducting terrorist attacks with conventional or [chemical or biological weapons] against the United States fearing that exposure of Iraqi involvement would provide Washington a stronger case for making war," the estimate reads.

The NIE indicated that Saddam would join with al Qaeda in an attack on the United States if it "would be his last chance to exact vengeance by taking a large number of victims with him" and only "if Baghdad feared an attack that threatened the survival of the regime were imminent or unavoidable."