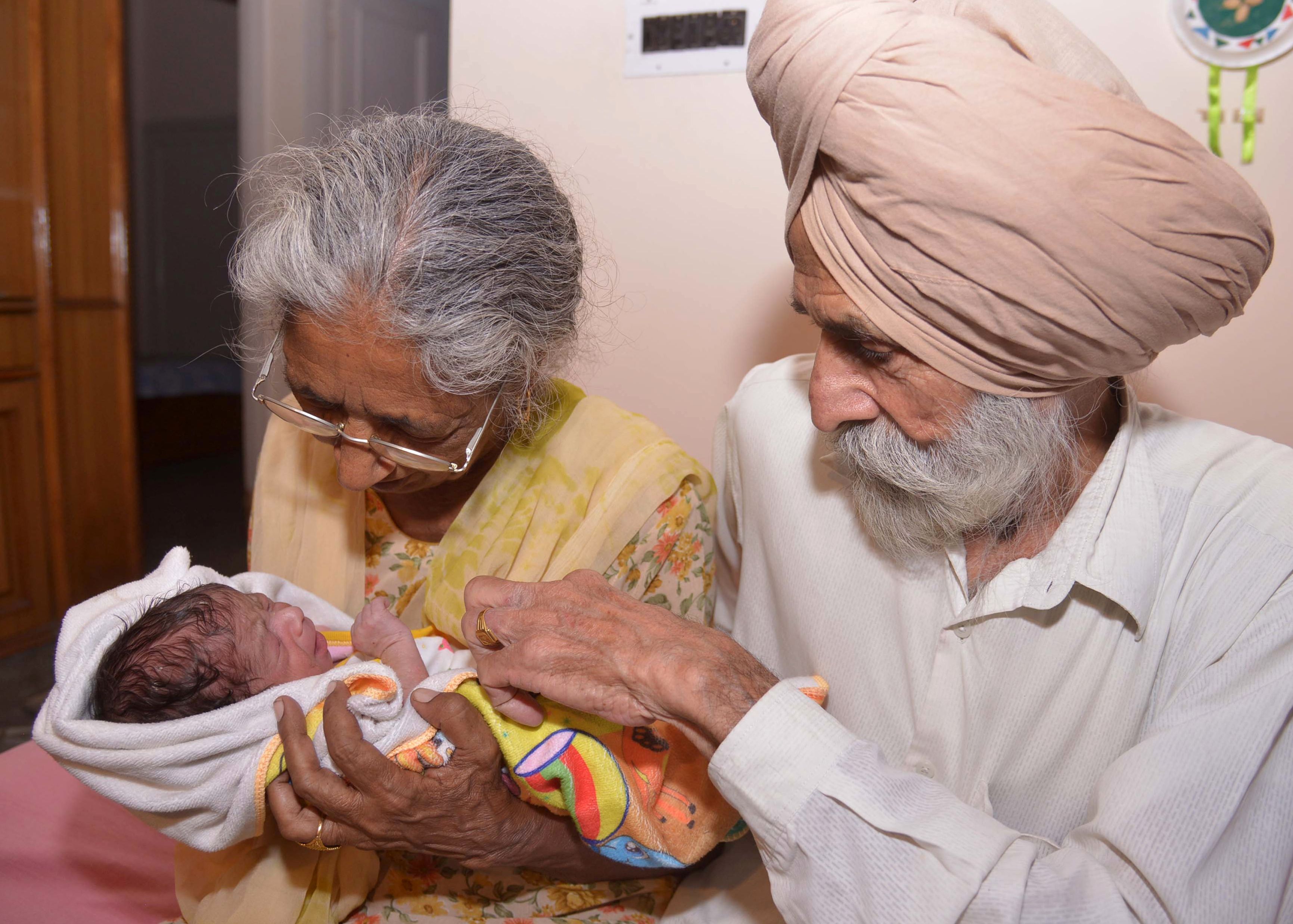 A woman in India could make the record books as one of the oldest ever to give birth.

Daljinder Kaur, who's believed to be at least 70 years old, gave birth to a son named Arman (meaning "wish" in Hindi) on April 19. The baby was the first for Kaur and her 79-year-old husband, Mohinder Singh Gill, after nearly five decades of marriage.

"I feel blessed to be able to hold my own baby. I had lost hope of becoming a mother ever," said Kaur, who underwent two years of IVF treatment and had two failed attempts earlier.

"Everyone asked me to adopt a baby, but I never wanted to. I had faith in Almighty, and knew I will bear my child one day," The Times of India quoted Kaur.

The baby, Arman, is healthy, according to reports.

Daljinder Kaur says she is 70 years old. But the clinic in the Indian state of Haryana, National Fertility and Test Tube Baby Centre, which helped Kaur become pregnant, put her age at 72. Many people in India, particularly those now over 50, don't know their exact age because they don't have birth certificates.

In 2006, another Indian woman, Rajo Devi, gave birth to a daughter at the age of 70, after treatment at the same clinic. If Kaur is 72, as the clinic claims, she would be the oldest woman in the world to give birth to a baby.

"The woman came to me alone first in 2013, after reading about us in a paper," the Hindustan Times quoted Dr. Anurag Bishnoi, embryologist and owner of the fertility clinic. "We started work within two months in 2013 but the first attempt failed, which is normal. After six months, another attempt was made and that also didn't succeed. Finally, the third attempt was successful," he said.

Some doctors and fertility experts expressed concern about the ethics of allowing IVF treatment on women as old as Kaur.

Dr. Ruth M. Farrell, a bioethicist in the department of Obstetrics and Gynecology at Cleveland Clinic, said that although there is no formal clinical data showing the risks associated with a woman giving birth in her 70s, such advanced age could present issues.

"Data shows that as maternal age increases, so do the risk of health complications for the pregnant woman," Farrell told CBS News. "Complications associated with blood pressure, blood sugars, other things that can affect the mother's health."

The baby's health could be at risk, too. The risk of preeclampsia, a condition characterized by high blood pressure and signs of damage to other organs like the kidneys, increases with age and can lead to preterm birth.

Beyond that, there is the question of who would take care of the child if elderly parents become ill, or if they don't live to see him grow up.

But Kaur's husband of 46 years seems unfazed about their age. "People say what will happen to the child once we die. But I have full faith in God. God is omnipotent and omnipresent, he will take care of everything," he told the AFP news agency.

Some critics worry that the couple's story will give unrealistic expectations to other parents hoping to have children at a late age. But Farrell said while it may garner interest among older parents wishing to conceive through IVF, she expects most won't move ahead with such plans after being educated about the risks.

In the U.S., the CDC reports that about 600 women a year give birth in their 50s, and in Germany last year, a 65-year-old grandmother delivered quadruplets. But experts say the odds that IVF treatment will be successful decline steeply once a woman is in her 40s.