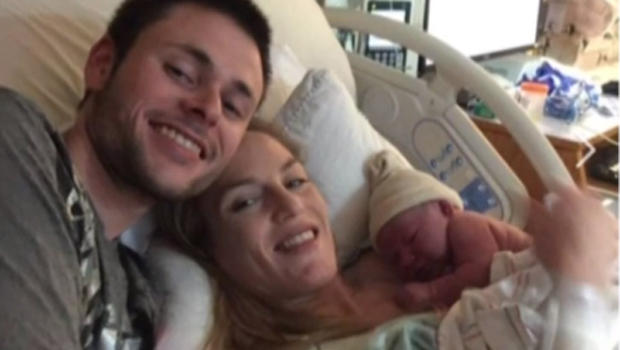 LANTANA, Fla. – The woman killed by the suspect who drivers say caused "mayhem" on a Florida highway Thursday was the mother of his infant daughter.

The Palm Beach County Sheriff's Office said Thursday that 22-year-old Hugo Selva shot his 26-year-old girlfriend, Nicole Novak, in a shopping center parking lot Wednesday. He then pulled her into his SUV and drove the wrong way on Interstate 95 before crashing into several cars. Deputy Connor Haugh then shot him.

Police have identified Selva as a suspect in two nonfatal shootings on Tuesday and Wednesday.

Selva's and Novak's Facebook pages show they had a daughter last year.

CBS affiliate WPEC reports that surveillance video appears to show the killing. Representatives from the station watched the video but agreed not to videotape it.

In the video Selva and Novak can be seen leaving the My Neighborhood Grocery store after two trips inside.

"They went in the store, bought some cigarettes and came back out of the store. Then they went back in the store and used the ATM machine," said a woman who works at a neighboring business and reportedly watched the scene unfold in the parking lot.

According to the station, in the video the couple appeared to be arguing before Novak hopped in the driver's seat. That's when it appears Selva pulled out a gun and shot and killed her.

With Novak out of the car the video appears to show Selva climb into the driver's seat and begin to pull away. The video then shows Selva backed out of the parking spot, appearing to leave, before changing his mind and pulling into another spot.

The video goes onto show Selva putting Novak's body in the car, and taking off.

In it, Marilyn told authorities that she was in fear and that Hugo had threated to kill her.

She wrote, "Hugo had a butcher knife and his hand and threatened to kill me."

Marilyn went on to say, "He gets up close to my face and… calls me Satan (expletive.)"