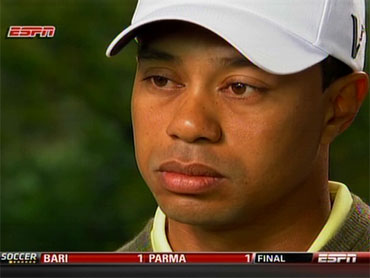 Tiger Woods is "a humbled Tiger" who was "obviously a different guy in many ways," but still shows the fire in his belly whenever the subject of his return to golf comes up, says Kelly Tilghman, who did one of two interviews of Woods that aired at the same time Sunday.

Woods admitted he was "living a lie" and said he was responsible for the sex scandal that engulfed his world, adding nobody in his inner-circle knew about his infidelity, Woods told Tilghman.

The other interview was on ESPN.

Tilghman has been close with Woods, has known him for 14 years, and has served as the emcee at some of his clinics.

The interviews marked the first time Woods has spoken to reporters one-on-one since the infamous accident in late November that led to word of his sexcapades becoming public.

On "The Early Show" Monday, Tilghman told co-anchor "Harry Smith "it had been a long time" since she'd seen Woods, "I think, since September of 2009. Obviously, (he was) a different guy in many ways. You could tell he was a little tired from the last few months and the road that he has been traveling. He was certainly gentle in his demeanor and had a soft look in his eyes, especially on the personal notes of conversation.

"But anytime we started talking about golf, a fire was in him that reminded me of the tiger of old and there was a genuine excitement to get back to competing, which he stated in that interview."

Woods is slated to return to golf at next month's Masters from his self-imposed exile.

Smith remarked that Tiger seemed "sort of a humbled Tiger."

Tilghman agreed, saying she "was just gonna use that phrase that you used so aptly there -- a humbled Tiger. I remember the first time I met him back in 1996, what a young guy he was, just off his U.S. amateur victories -- three in a row. Just breaking into the professional scene, the world scene. And I remember he reminded me of that guy that I met with that innocent smile that he had on his face, but also that fire in his belly and that confidence that he could go out and do something special on the world stage. And everyone's looking forward to the Masters. And I would say at the top of that list just might be Tiger Woods."

"I think," Tilghman told Smith, "all in all, he's going to keep any details that relate to him and his wife to himself, and she will likely do the same for the rest of her life. She's always been a very quiet character in the world of golf. So I think that is gonna remain the same no matter what the forum is." Woods also kept mum about details of the accident.

Tilghman says it was clear Woods misses his late father and the guidance he used to provide very much, and that Woods is fully embracing the principles of his Buddhist faith.