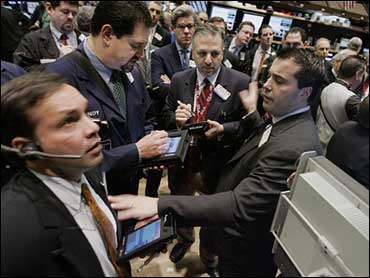 The world's largest investment bank reported a staggering profit of $9.4 billion and revenue of $37.67 billion for its fiscal year thanks to record takeover activity and a robust stock market. Record high revenues came from every part of its business, including investment banking, fixed income, commodities, equity trading, and asset management.

Goldman said it was dedicating $16.5 billion for salaries, bonuses and benefit at the end of the year. This translates to an average of $622,000 for each employee, though the biggest payouts are given to top investment bankers who bring in the huge deals.

CBS News national correspondent Byron Pitts reports that experts say top executives at the company will earn as much as 20 to $50 million each.

"There are a lot of other avenues of people who want to gobble up their talent," Hall said.

Goldman's record results left some on Wall Street wary about whether the good times may have peaked. Investors sent the company's high-flying stock down $1.56 to $200.97 on the New York Stock Exchange.

But Goldman Sachs shares are up about 58 percent in 2006, offering the strongest returns of any Wall Street investment house.

"The stars must all be aligned as they were in the just-ended period," said Richard X. Bove, an analyst with Punk Ziegler. "The equity markets must be strong. Private equity funds must be able to stimulate mergers. The worldwide economy must maintain its growth. Lacking these factors, the company could see a substantial decline in earnings in 2007."

There are already indications that the U.S. economy is moderating, and that securities firms will be hard-pressed to match this year's results. The big investment houses also face a drop in mortgage derivatives and debt financing used to finance takeovers.

Indeed, even the company's top executives would not go as far as to claim a repeat is in the works. Chief Financial Officer David Viniar said it is "very hard to predict what is going to happen in our business" but he again forecast growth.

Still, it might not be the kind of growth Goldman reported Tuesday. Or the kind likely to be seen when Lehman Brothers Holdings Inc. and Bear Stearns Cos. post results on Thursday, and Morgan Stanley Inc. next Tuesday.

Results easily surpassed Wall Street projections for earnings of $6.04 per share on $8.96 billion of revenues, according to analysts polled by Thomson Financial.

This kind of report would have been difficult for Chairman and Chief Executive Lloyd Blankfein to predict when he took over the leadership in June to replace Treasury Department-bound Henry Paulson. At that time, the stock market took a summer dive and big equity deals all but dried up.

But a turnaround that sent the stocks to new highs also sent many of Goldman's top businesses into record territory.

"If the global economy continues to grow, then we'll grow," he told journalists. "We're seeing a good backlog of deals, a lot of dialogue with companies, and activity both on the strategic and financial-sponsored side."

Trading during the fourth quarter remained one of Goldman's biggest drivers, with revenue from stock transactions up 105 percent to $1.23 billion. Trading of bond, currency and commodities jumped 58 percent to $3.1 billion.

Revenue from its asset management and prime brokerage business rose 16 percent to $1.43 billion, but dipped 2 percent from the third quarter. Goldman reported that its Global Alpha hedge fund performed poorly in November, and is down 10 percent this year.

This all showed some "impressive earnings power," said UBS analyst Glenn Schorr. "Despite some noise, it's a strong close to a record year no matter how you slice it, and the outlook remains favorable."