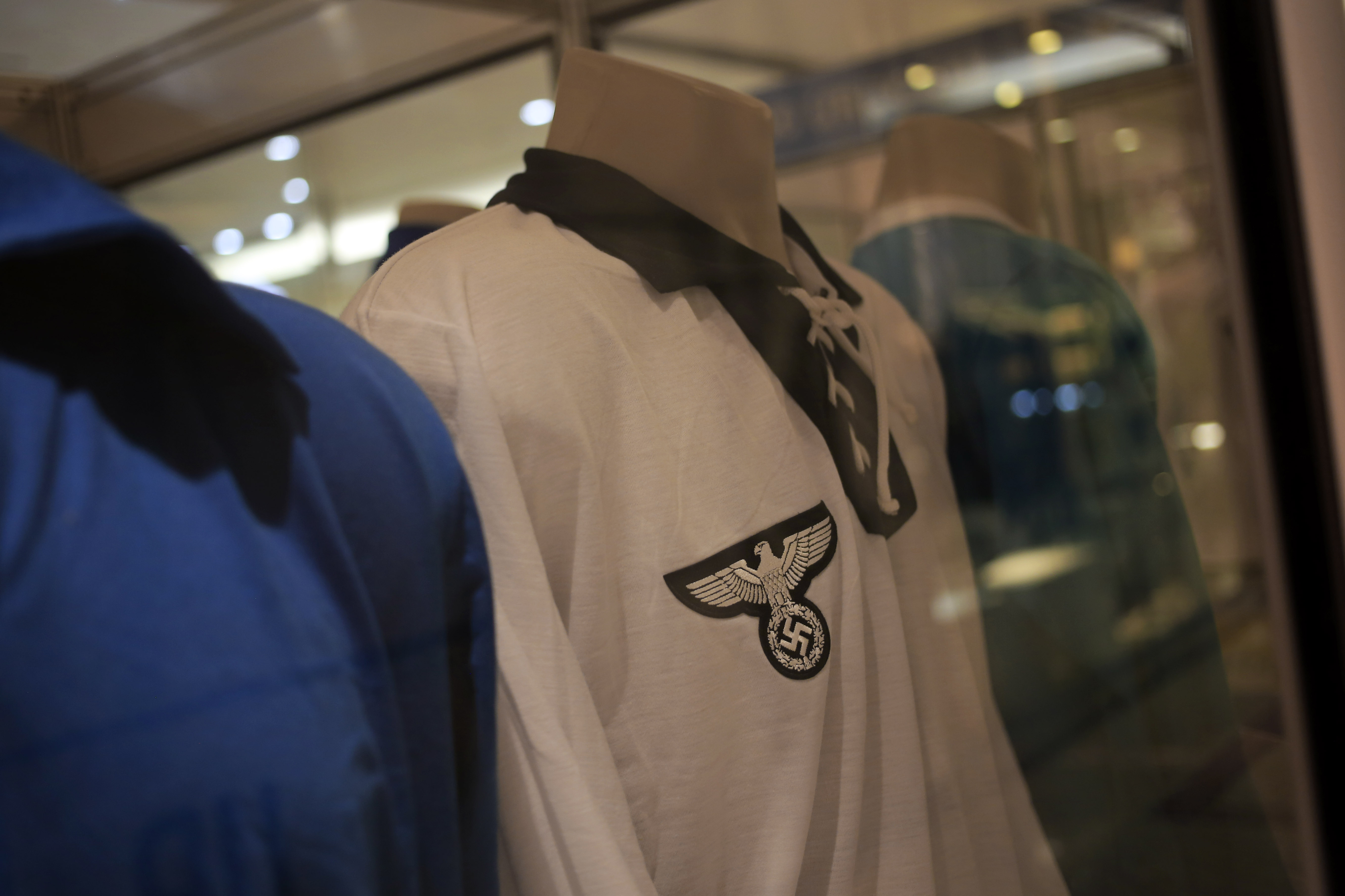 SALVADOR, Brazil -- An exhibition of football jerseys that includes a Nazi-era shirt and one from Mussolini's fascist regime is raising eyebrows from visitors to a busy shopping mall in this Brazilian city.

The exhibition includes more than 100 replicas and originals from different nations, dating back to the first World Cup tournament in 1930.

Salvador doctor Duda Sampao, the owner of the collections, said that the exhibition has been endorsed by the local Brazilian World Cup organizing committee, and therefore has the consent of FIFA. World football governing body officials refused to comment, referring the matter to local organizers.

When visitor Rolf Zettel took a closer look of a white football shirt with a silver Nazi-era swastika on it, he couldn't believe: "Is this a joke or what? Germany 1934, a despicable time."

The Swiss fan from Fribourg was looking at a replica of a German 1934 World Cup shirt. "Is this OK? No it's not OK," Zettel said.

In Germany, displaying swastikas is a punishable offense.

In a display in another glass case in the Salvador mall is a black Mussolini-era Italian shirt with a symbol of the Italian Football Association, bearing the fasces - a cylinder around an ax which was the symbol of Italian Fascism.

Close by is a jersey worn by Israeli players at the 1970 World Cup.

The 1934 World Cup, held in Italy as Hitler came to power in Germany, was remembered for Mussolini's fierce propaganda of his fascist regime. Italy won the tournament, beating Czechoslovakia 2-1 in the finals. Germany - playing its first ever World Cup - was third, defeating Austria 3-2.

"There is no political involvement with this, and not quietly I put in an Israeli jersey too from 1970," he said. "I tried to put a Palestinian one from 1938, (but) the Palestinian team did not reach the World Cup, it was defeated by Greece."

Chile fan Leonardo Duarte said, "it actually represents a time that I don't know that well, but that was really negative in world history," said Leonardo Duarte, a Chile fan.

Sampao, the collector, defended the display and said visitors understood the exhibition.

"People are very interested. They take a look and they say that they don't see this (emblem) anymore and how did this happen? So we try to explain that it was a historical moment that Germany was passing by the Third Reich, Hitler was rising from it. So, people get that with no problem."