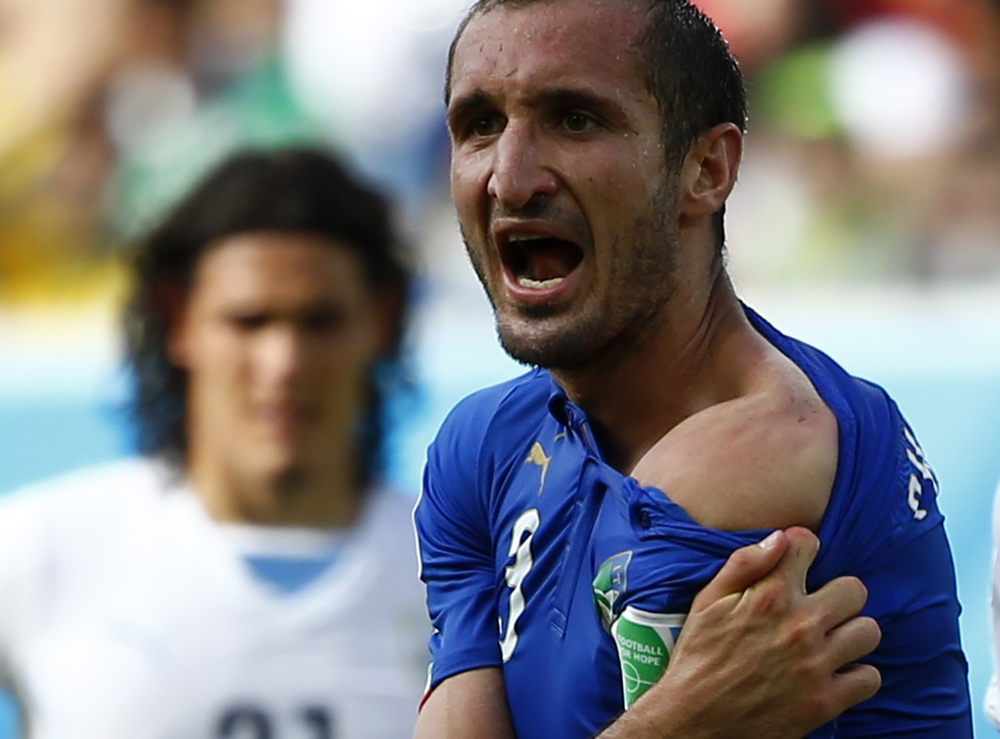 MILAN -- Giorgio Chiellini believes Luis Suarez has been harshly punished by FIFA for biting his shoulder during their decisive World Cup match.

Suarez was banned from all football activities and stadiums for four months, suspended from Uruguay's next nine internationals, and fined.

"Now inside me there are no feelings of joy, revenge or anger against Suarez for an incident, which happened on the pitch and is done," Chiellini wrote in his blog for Sportlobster. "There only remains the anger and the disappointment about the match. At the moment, my only thought is for Luis and his family, because they will face a very difficult period.

"I have always unequivocally considered the disciplinary interventions by the competent bodies, but at the same time I believe the proposed formula is excessive. I sincerely hope he will be allowed to stay close to his teammates during the games, because such a ban is really alienating for a player."

Uruguay's football federation said it planned to appeal the ban, which leaves it without its star striker and leading goalscorer for next year's Copa America, and most likely for the start of its qualifying matches for the 2018 World Cup.

Suarez bit Chiellini's left shoulder during a 1-0 win against Italy in the group stage on Tuesday.

This is the third time Suarez has been banned for biting an opponent. In 2010, Suarez was banned for seven matches for biting PSV Eindhoven's Otman Bakkal while playing in the Dutch league, earning him the nickname "Cannibal of Ajax." Suarez was suspended for biting another opponent, this time Chelsea's Branislav Ivanovic, in April 2013.

He has also been banned in England for racial abuse.

Suarez quietly returned home to Uruguay on Friday following his expulsion from the World Cup, long after a crowd that had come to greet him as a national hero had drifted away.

President Jose Mujica was among some 1,000 people who went to Carrasco International Airport in Montevideo to meet Suarez Thursday night, but he left after being told that Suarez's flight had been delayed.

A private jet carrying the star striker finally arrived at about 5 a.m., but Suarez left without making comments to the press.

Suarez's punishment was overwhelmingly seen as unfair by Uruguayans.

"I came to encourage Suarez because Suarez is the God of the national team. He gives his soul to the team," said Lucia Romanello, who came to the airport wrapped in the Uruguayan flag.

"With the world against him, we want him to know that Uruguayans are for him," said student Clara Bragard, who also carried the blue-and-white-striped flag.

Many in the country of 3.4 million have accused FIFA of punishing the small country to ease the way for larger nations in the Cup.

Uruguay will now be without its best player for its second-round match against Colombia on Saturday.