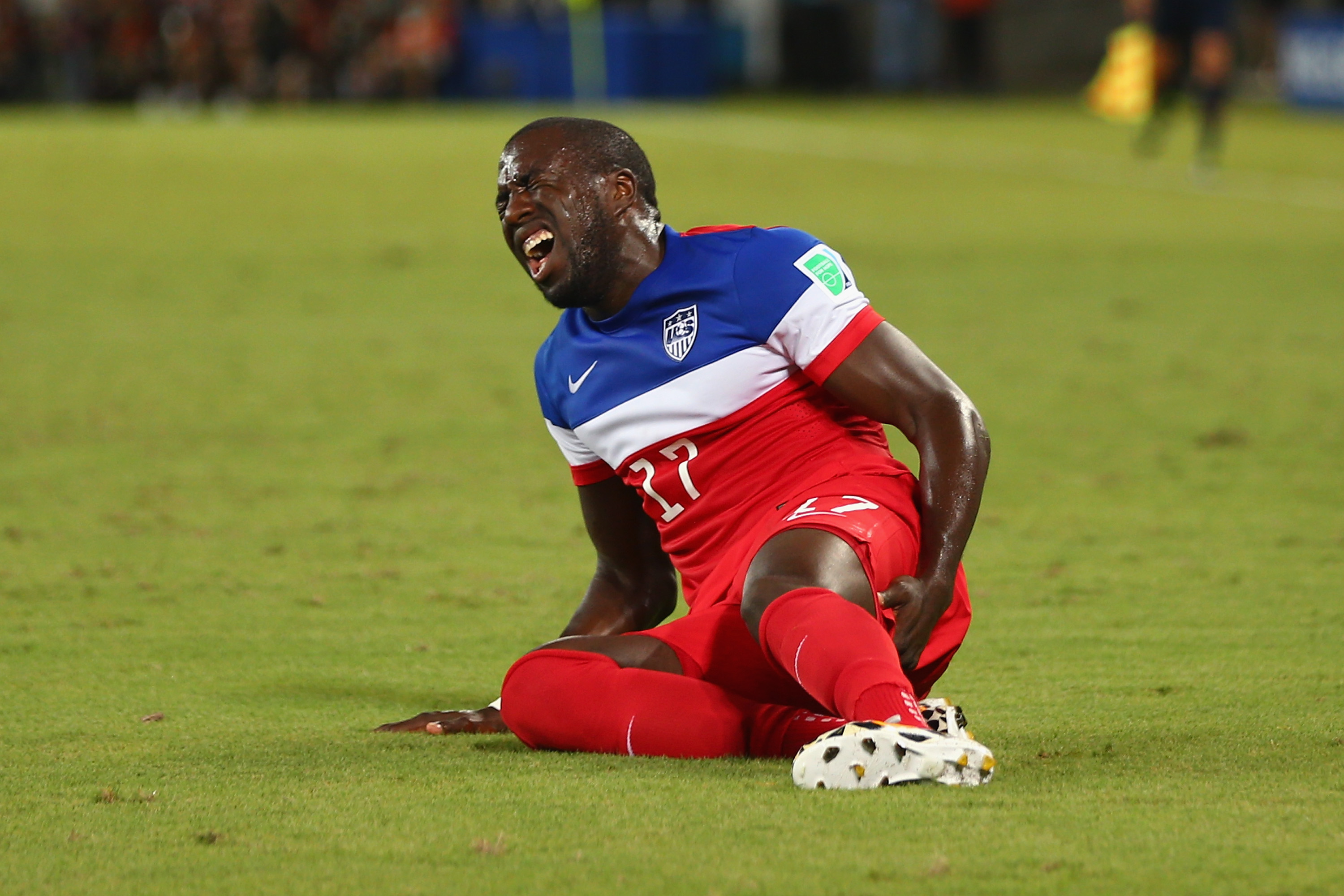 Altidore was hurt during the first half of Monday's win over Ghana.

"It's bad news, but I think the team will handle this," midfielder Jermaine Jones said Thursday. "We have to handle that."

U.S. team spokesman Michael Kammarman said Thursday the Americans were hopeful Altidore can return at some point during the tournament. The Americans complete the first round against three-time champion Germany on June 26.

"We're extremely bummed for him and the team, but we bring 23 players and so this is just a chance for somebody to step up," midfielder Kyle Beckerman said.

Defender Matt Besler, who came out of the Ghana match at halftime because of a sore right hamstring, should be available for Sunday's game in Manaus, Kammarman said.

Aron Johannsson replaced Altidore for the second half against Ghana.

The game against Ghana was a triumph for the U.S. - a "top 10" all-time game, U.S. soccer legend Cobi Jones told CBS News - but it may not offer them many lessons for taking on the Portuguese.

"No matter how good the players were on the Ghanaian team, none of them compare to Cristiano Ronaldo," Jones said.

Jones, who is the all-time leader in appearances for the U.S. men's soccer team, played against Brazil's Ronaldinho during the height of that particular all-time great's rein atop the soccer world. He said there's really only one thing you can do when playing against the Ronaldos and Ronaldinhos of soccer.

"The strength he had, and his ability to keep the ball close to him ... that one-on-one situation is not going to work for you defensively. You needed that extra support," Jones said.

Players hope to become the first American team to win consecutive World Cup games since a 2-0 start at the very first tournament in 1930.

"Woke up today, this morning, and you look at your Instagram and Twitter and you see the videos that people posted," Alejandro Bedoya said of fans back home celebrating Brooks' goal. "It's really cool, and I'm sure everybody feeds off this energy."

The match drew 11.09 million viewers on ESPN, a record for men's soccer on the network. And after decades when U.S. soccer fans felt outnumbered - even at home games - players took notice of the raucous red, white and blue-clad crowd at Arena das Dunas in Natal.

"It was an incredible feeling, the support we had from the fans in the stadium along with the fans in every part of the country. We felt that," said midfielder Graham Zusi, whose corner kick was headed in by Brooks. "It just makes me want more of it."

But before the next game, the U.S. needs to heal a little.

Dempsey, who set the tone when he scored 30 seconds in, had his nose broken by a shin to the face from defender John Boye when they battled for a header. Klinsmann expects him to play Sunday in the Amazon rain forest capital of Manaus.

"I don't know how much a mask can protect him," Klinsmann said. "It was tricky during the game. He barely could breathe. He struggled with that. But once it's broken, it's broken. It will take time to heal completely."

Dempsey will be paired up front either with Aron Johannsson, who was ineffective as Altidore's replacement, or Chris Wondolowski.

Besler, like Altidore, went for an MRI. The defender felt soreness in his right leg late in the first half and was replaced by Brooks for the start of the second.

"Matt is no problem. All fine for the next game," Klinsmann said.

Bedoya was hobbling before Zusi replaced him in the 77th minute. He said he had a hip pointer, the reoccurrence of an old injury, then also cramped up in his hamstring.

Portugal also has injury issues and will have to change the right side of its defense. Pepe was ejected in Monday's 4-0 loss to Germany after he appeared to head butt Thomas Mueller. Right back Fabio Coentrao was taken off on a stretcher and forward Hugo Almeida limped off. Coentrao is out for the tournament.

If the U.S. ties fourth-ranked Portugal and No. 2 Germany defeats Ghana, the Americans would head to their third match in prime position to advance. If the Americans and Germans win, the U.S. clinches with a game to spare.

Klinsmann gave players a day off from training Wednesday.

"Our bodies are banged up a bit," Bedoya said.