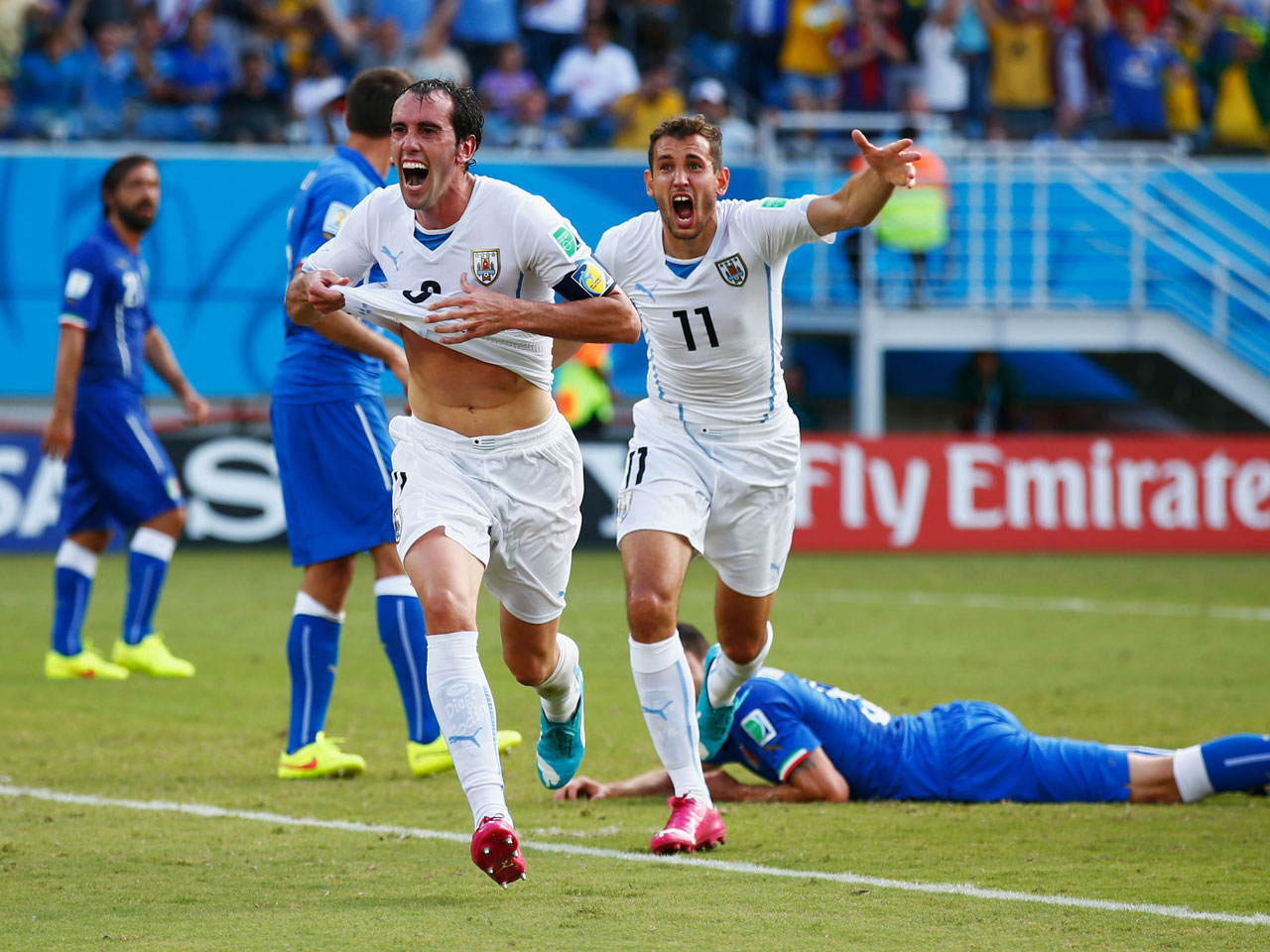 NATAL, Brazil - Captain Diego Godin scored in the 81st minute as Uruguay edged 10-man Italy 1-0 Tuesday to reach the second round of the World Cup, although the victory was overshadowed by a biting incident involving the South American side's star forward Luis Suarez.

Four-time champion Italy, meanwhile, is heading home after the group phase for the second time in four years.

Godin rose above a crowd of defenders to meet a corner with his left shoulder and veteran goalkeeper Gianluigi Buffon had no chance.

Suarez was already sanctioned with a heavy ban for biting Chelsea defender Branislav Ivanovic in the English Premier League in 2013 and FIFA can sanction players for biting with bans of up to two years. Suarez also served a seven-game suspension for a bite during a Dutch league match in 2010.

Chiellini said Suarez should have been sent off and that the red card for Italy midfielder Claudio Marchisio should never have been given.

It was only one of many ugly incidents in a highly physical "in or out" match at the Arena das Dunas.

Marchisio was shown a direct red card for putting his boot into Egidio Arevalo's knee in the 59th. Also, Mario Balotelli picked up his second yellow card in two matches for a dangerous foul during the first half, and was benched for the second period.

"(The referee) certainly didn't give us a helping hand," Buffon said. "But in the end you can't always be recriminating and putting the blame on others.

"Every now and then, it's only right that you accept what you're to blame for and when you're coming off two defeats without even scoring a goal, we clearly also have to take our share of that blame," added Buffon, who tied the record by being selected for his fifth World Cup squad.

Costa Rica was the surprise winner of Group D with seven points following a 0-0 draw with England on Tuesday. Uruguay finished second with six, while Italy and England went home with three and one point, respectively.

Uruguay had to win to go through while Italy needed only a draw and it was clear that the Azzurri were playing for that result when coach Cesare Prandelli replaced Balotelli with a defensive midfielder, Andrea Parolo, to start the second half.

It appeared the tactic could work when veteran goalkeeper Buffon stuck his right arm out to deny an excellent effort from Suarez in the 66th on a sizzling afternoon.

But Godin was waiting to meet a corner from substitute Gaston Ramirez, who had come on three minutes earlier. With his back to the goal, Godin managed to redirect the ball into the far corner.

Uruguay had argued for a penalty in the 51st when Edinson Cavani got his legs tangled with Leonardo Bonucci, but Mexican referee Marco Rodirguez motioned to play on.

The last time Italy failed to proceed from the group stages in two successive World Cups came between 1950 and 1966, when Italy was eliminated in the first round four successive times.

"I assume full responsibility," Italy coach Cesare Prandelli said, while also criticizing the referee for Marchisio being sent off.

"It's absurd to be left with 10 men in a match like this," Prandelli said. "There were no ugly fouls worthy of being sent off. You can't (ruin) a match like that. The referee ruined the match."

Days before departing for Brazil, Prandelli signed a contract extension to keep him in place through the 2016 European Championship but now his future appears in question.

"After four years of work, a red card puts everything up for discussion," Prandelli said. "Let's reflect now and then we'll see."

Italy controlled much of the match with its passing accuracy in midfield while Uruguay relied on swift counterattacks and even attempted to surprise Buffon with shots from its own half.

FIFA listed the temperature at a sizzling 91 F, and clouds gave way to sun about midway through the first half, providing no relief for the players.

Uruguay fans took over one entire corner of the stadium - which is named after this coastal city's massive sand dunes - and greatly outnumbered Italy's supporters.

In the 22nd, Balotelli was shown a yellow for a needless foul on Alvaro Pereira. Balotelli practically leapt over the midfielder, hitting the back of the opponent's head with his left shin.

Pereira was already the victim of a head injury in Uruguay's 2-1 win over England.

Uruguay's next opponent will be the winner of Group C, which is currently led by Colombia.