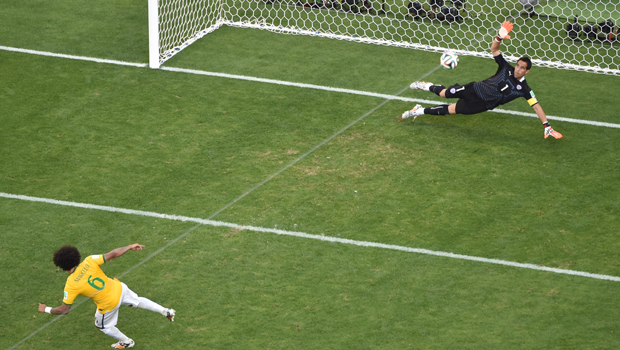 BELO HORIZONTE, Brazil - Neymar scored the winning penalty Saturday to give Brazil a 3-2 shootout win over Chile in the second round of the World Cup.

The Brazil striker scored the third penalty after David Luiz and Marcelo also scored from the spot.

When Jara's final penalty struck the post, some of Brazil's players celebrated wildly while others fell to the ground, exhausted and emotionally drained.

Willian, who missed a penalty for Brazil, sobbed uncontrollably, as Fred helped him to his feet.

As the crowd at the Mineirao Stadium roared, the Brazilian players joined hands in a human chain, while Chile's team stood motionless.

In a later match, James Rodriguez scored twice to put Colombia into the World Cup quarterfinals for the first time in a 2-0 victory over Uruguay on Saturday.

Earlier, Luiz scored for the World Cup hosts in the 18th minute after Thiago Silva deflected Neymar's corner kick toward the far post. Luiz was given the goal but Chile defender Gonzalo Jara may have touched the ball before it went in.

Chile equalized in the 32nd after Eduardo Vargas intercepted Hulk's pass and found Alexis Sanchez, who scored from the right side of the penalty area with a shot toward the far post. Hulk thought he put Brazil ahead 10 minutes into the second half, but referee Howard Webb disallowed the goal, ruling Hulk took down a long pass with his arm.

The match ended 1-1. A half-hour of extra time went scoreless.

Brazil will next face either Colombia or Uruguay in the quarterfinals.