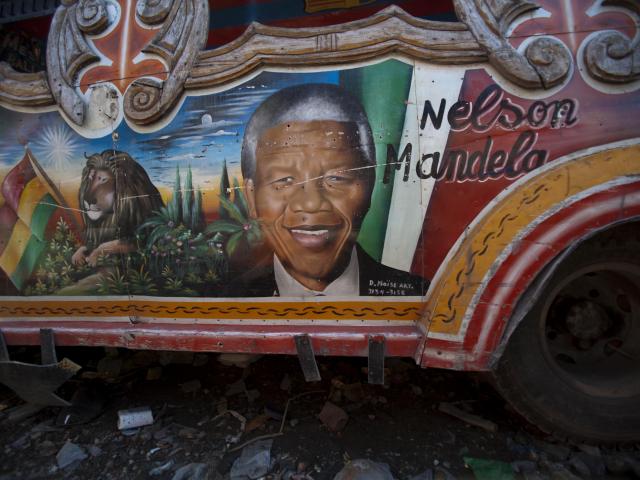 News of the death of former South African President Nelson Mandela was met by an outpouring of sorrow at his passing and tributes to his achievements in breaking down apartheid and bringing democracy to his nation. Here is a selection of some of the reaction:

"He achieved more than could be expected of any man. And today, he's gone home. We've lost one of the most influential,courageous and profoundly good human beings that any of us will share time with on this earth.  He no longer belongs to us.  He belongs to the ages." - President Barack Obama

"President Mandela was one of the great forces for freedom and equality of our time. He bore his burdens with dignity and grace, and our world is better off because of his example. This good man will be missed, but his contributions will live on forever." – Former President George W. Bush

"Today the world has lost one of its most important leaders and one of its finest human beings. And Hillary, Chelsea and I have lost a true friend. History will remember Nelson Mandela as a champion for human dignity and freedom, for peace and reconciliation. We will remember him as a man of uncommon grace and compassion, for whom abandoning bitterness and embracing adversaries was not just a political strategy but a way of life." - Former President Bill Clinton

"He was a man of tremendous moral courage, who changed the course of history in his country." -- Former President George H.W. Bush

"His passion for freedom and justice created new hope for generations of oppressed people worldwide, and because of him, South Africa is today one of the world’s leading democracies."– Former President Jimmy Carter

"Certainly, he was exceptional. But the spirit of greatness that he personified resides in all of us. Human beings are made for greatness. Nelson Mandela embodies and reflected our collective greatness. He embodied our hopes and dreams." - South African Archbishop Emeritus Desmond Tutu

"I pray that the late president's example will inspire generations of South Africans to put justice and the common good at the forefront of their political aspirations." -- Pope Francis I, who went on to praise "the steadfast commitment shown byNelson Mandela in promoting the human dignity of all the nation's citizens and in forging a new South Africa built on the firm foundations of non-violence, reconciliation and truth."

"Mandela's wisdom and compassion were formidable enough to change the world. First his courage and then his forgiveness inspired us all, and challenged us to do better." -- Vice President Joe Biden

"His was a life filled with purpose and hope; hope for himself, his country and the world. He inspired others to reach for what appeared to be impossible and moved them to break through the barriers that held them hostage mentally, physically, socially and economically. He made us realize, we are our brother's keeper and that our brothers come in all colors." –  American boxing legend Muhammad Ali

"Nelson Mandela was a giant for justice and a down-to-earth human inspiration. Many around the world were greatly influenced by his selfless struggle for human dignity, equality and freedom. ... Nelson Mandela showed what is possible for our world and within each one of us - if we believe, dream and work together for justice and humanity."  ---  U.N. Secretary-General Ban Ki-Moon

"His jailers sat in the front row of his inauguration. I will never forget him, nor will the world." -- Former U.S. Secretary of State Colin Powell

"Even as we mourn, we remember how privileged the world was to witness the transformation he wrought by changing minds and hearts. He was apartheid's captive but never its prisoner, and he rid the world of one of history's foulest evils by hewing to universal principals for which he hoped to live but was prepared to die." -- U.S. National Security Adviser Susan Rice

"Mr. Mandela was the embodiment of courage and reconciliation. He was also a man of great humour and had a real zest for life. With his passing, there will be an immense void not only in his family's lives, but also in those of all South Africans and the many others whose lives have been changed through his fight for peace, justice and freedom. The world has lost an inspired leader and a great man. My family and I are profoundly saddened and our thoughts and prayers are with his family." -- Britain's Prince Charles

"A great light has gone out in the world. Nelson Mandela was a hero of our time." -- British Prime Minister David Cameron

"Nelson Mandela is physically separated from us but his soul and spirit will never die. He belongs to the whole world because he is an icon of equality, freedom and love, the values we need all the time everywhere. His long, long struggle is a great demonstration of humanity. I have learned so much from Nelson Mandela and he has been my leader. He is a perpetual inspiration for me and millions of others around the world.'' -- Pakistani education activist and equality campaigner Malala Yousafzai

"The name Mandela stirred our conscience and our hearts. It became synonymous with the pursuit of dignity and freedom across the globe." -- Irish Prime Minister Enda Kenny

"I join with people of all races in mourning the death of this great lion of African liberation, but celebrating his magnificent life of service to freedom, human rights and justice for all humanity. Nelson Mandela's life and leadership exemplified the highest courage, dignity and dedication to human liberation." -- King Center CEO Bernice A. King, daughter of civil rights leader Martin Luther King and Coretta Scott King

"Nelson Mandela was a giant of immense and unwavering intellect, courage and moral authority. He chose reconciliation over retaliation. He changed the course of history." -- Civil rights leader Jesse Jackson

"It's extremely sad and tragic news. We were just reminded what an extraordinary and inspiring man Nelson Mandela was." -- Britain's Prince William, who learned the news when he and the Duchess of Cambridge emerged from the U.K. premiere of "Mandela: Long Walk to Freedom"

"We will never speak of Mandela in the past tense." -- Cuban President Raul Castro

"History offers few examples of people who were as devoted or sacrificed more for a cause greater than their self-interest than Nelson Mandela. Of all his many exceptional qualities, though, the one that has always impressed me the most is his capacity for forgiveness. Imprisoned unjustly for 27 years, he bore no hate for those who took his freedom from him, who denied his dignity." -- U.S. Sen. John McCain, R-Ariz.

"As both the emancipator of a people and the founder of a modern democracy,  Mandela was one of the truly unique and transcendent figures of our time." -- U.S. Senate Majority Leader Harry Reid, D-Nev.