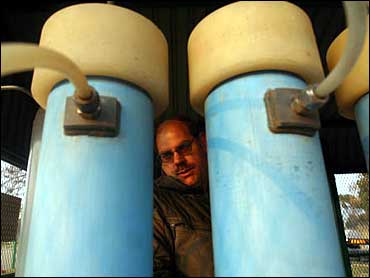 The United States, Saudi Arabia and other wealthy nations at a U.N. summit worked Tuesday to water down proposals to rapidly expand the use of clean, renewable energy technologies around the globe.

Renewable energy sources like wind power and solar energy produce smaller and more expensive amounts of electricity than a traditional power plant. But the technologies generate a tiny fraction of the smog that comes from burning oil, coal and other fossil fuels, as well as carbon dioxide and other gases believed to accelerate global warming.

A proposal for the World Summit on Sustainable Development's action plan calls for the use of the technologies to be increased to account for 15 percent of the world's total energy production by 2010.

Sources sitting in on the negotiations said delegates from the United States, Saudi Arabia and other industrialized and oil states were lobbying to eliminate the provision and set no specific goals.

Even the European Union — some members of which, like Germany, strongly embrace renewable energy sources — wavered on the agreement.

"We may have to bend if we can't convince all of our partners," said EU official Christine Day. "It's early in the negotiations."

The 10-day summit, which began Monday, is focused on uplifting the world's poor and protecting the global environment. The United Nations expects it to be the largest summit in its history. More than 100 heads of state are scheduled to attend.

During Tuesday's open session, delegates called for increased global efforts to bring new agricultural technologies to poor farmers and railed against European and American agricultural subsidies, saying they made it difficult for poor farmers to compete on the world market.

Developing countries are hoping the summit's action plan will call for the reduction or elimination of subsidies, a provision opposed by wealthy countries. The summit was unlikely to resolve the issue. "No country can realistically be expected to make a major commitment here on those matters," South African Trade Minister Alec Erwin said.

The United States, Canada and other large energy producers also opposed a provision requiring industrialized nations to phase out some subsidies for their energy industries, according to representatives of a U.S. non-governmental organization monitoring the energy discussion.

The provision called for eliminating subsidies for practices that do not support sustainable development, but did not define the subsidies or practices.

In the United States, renewable sources provide 1 percent of the nation's total power supply despite recent expansions in wind turbine "farms" and other sources.

One would eliminate all target dates.

The alternative would set the 15 percent target. However, the broadly written definition of renewable energy would include hydroelectric dams and wood burning — energy sources that conservationists condemn, saying they damage the environment.

Factoring in those sources, renewable energy already contributes 14 percent of power supplies worldwide. That would make the increase called for in the agreement just another percentage point a target clean energy supporters call unacceptable.

"If renewable energy is to grow and costs are to go down, it will need targets and frameworks," said former Shell Oil chairman Mark Moody-Stuart, chairman of Business Action for Sustainable Development, an advocacy group organized following the Rio Summit.

"Since Sept. 11, Americans haven't wanted to speak out for the environment because it doesn't seem patriotic," Goodall said. "If we allow our planet to deteriorate any more, the terrorists will get their victory. There will be nothing left."