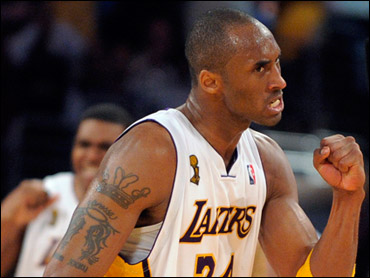 Men's Fitness magazine has just released their list of the top 25 fittest men in the world in their May issue. Chris Strauss, features editor of the magazine, appeared on "The Early Show" Tuesday to share just who made the list and some of their secrets.

This year, Strauss said, the magazine's editors salute a mix of celebrities, athletes, entrepreneurs and other public figures who have demonstrated a special dedication to fitness.

Following is the 2010 "MF25" list of the fittest guys in the world", published in the May issue of Men's Fitness:

Ryan and Jeremy Black, 36 & 35, USA (Founders of Sambazon)
After they discovered the "superfood" acai berries on a surfing trip 10 years ago, the Black brothers put their discovery to good use. They became the first U.S. supplier of the fruit, giving them plenty of reasons to catch more waves.

Alexander Ovechkin, 24, Russia ( Hockey Player)
Ovechkin is one of the NHL's most skilled offensive players and the most physical. When asked what drives him be at the top of his game, he gives credit to his powerful legs and his hard workout regimen. "Without training, I'm nothing," he says.

Cristiano Ronaldo, 25, Portugal (Soccer Player)
Ronaldo gets about as much attention for his Hulk-like physique as he does for his ball-handling skills. Ronaldo's secret? He does a staggering 3,000 sit-ups a day and strapping on weights to his feet, then dribbles a soccer ball.

Sheamus, 32, Ireland (Professional Wrestler)
The 6'6'', 272-pound WWE champ was destined to have a great body. The son of an amateur bodybuilder, Sheamus first learned how to work out and use weights by working alongside his father. "I knew I had to step my game up," he says. "You can always look better."

Paul Rodriguez, 25, USA (Pro-Skater)
Paul Rodriguez has dominated street-skating for years. He trains with a personal trainer and has a workout regime that consists of core training and ply-o-metrics.

Denis Leary, 52, USA (Actor)
As the star of FX's hit show, "Rescue Me," Denis Leary is not a big fan of regular cardio workouts. "I would have to commit a crime and have cops chase me. That would be the only way to get me to jog five miles," says FX's "Rescue Me" star. Instead the actor prefers a good game of street hockey to keep him in shape. "You can chase a ball and beat the crap out of each other for three hours at a time," he says.

Jake Gyllenhaal, 29, USA (Actor)
For his lead role in the upcoming blockbuster, "Prince of Persia: The Sands of Time," Jake Gyllenhaal had to undergo a dramatic physical transformation. The actor packed on the muscle by doing a combination of outdoor cardio interval workouts and power circuits in the gym.

Common, 38, USA (Rapper/Actor)
Grammy-nominated rapper Common gave up the junk food for a healthy diet and a strong workout regime. "I feel like I'm planting seeds when I'm (working out)," he says, "making things fruitful and giving back to myself."

Roger Goodell, 51, USA (NFL Commissioner)
NFL commissioner Roger Goodell is helping the fight against childhood obesity. He along with the NFL created the "Play 60" campaign to urge kids to exercise. Goodell is a great role model for being active as he has climbed Mount Rainier and does a three-hour cardio regimen every day.

Ryan Kwanten, 33, Australia (Actor)
As Jason Stackhouse in HBO's hit series True Blood, Kwanten's frequent nude scenes gives him plenty of motivation to stay in shape. However, as a former welterweight boxing champion, a biathlon athlete and a yoga instructor, the actor doesn't have to worry about keeping in shape.

Vitor Belfort, 32, Brazil (UFC Middleweight)
The youngest fighter to ever win a UFC bout, Belfort is training to make his way back into the Octagon ring after being sidelined by a bad shoulder injury. His routine consists of runs and lifts in the mornings but mostly cross training with a focus on grappling, sparring, and striking.

Kobe Bryant, 31, USA (NBA Player)
The NBA star is arguably one of the best basketball players of all time. Now in his 14th season, Kobe is lean and muscular after bringing on basketball legend Michael Jordan's former trainer Tim Grover on the road to help him with his training. "The key is to push yourself to a level where you're hurting," says the basketball star.

Sam Worthington, 33, Australia (Actor)
For his role in the block-buster film, "Avatar," Sam Worthington spent months doing physical training. He and the cast even went on a jungle boot camp, trekking the rain forest and living tribally.

Jamie Bestwick, 38, United Kingdom (BMX rider)
He might be the oldest BMX champion but James Bestwick is the fittest. The BMX star does a workout regimen consisting of weight training, power yoga, Pilates, and road biking.

Herschel Walker, 48, USA (MMA Amateur Fighter)
Herschel Walker is the1982 Heisman Trophy winner, a former NFL star and star MMA fighter. Walker also participated among other things including earning a fifth-degree black belt in tae kwon do. To keep in shape, Walker does a daily regimen of 1,000 pushups and 1,000 sit-ups.

Matthew Long, 43, USA (NYC Firefighter)
In December 2005, Matthew Long was given a five percent shot at life after being run over by a bus and was told he was never going to walk again. He fought against all odds and recently completed an Ironman Triathlon last summer.

Chris Hemsworth, 26, Australia (Actor)
The up-and-coming actor is preparing for a role of a lifetime - to play the mallet-wielding Norse god Thor, in the epic movie "Red Dawn" that is scheduled to theaters in 2011. Luckily he has the body needed to live up to his rising stardom.

Jason Statham, 38, United Kingdom (Actor)
The former Olympic diver now an action movie star will be starring alongside Sylvester Stallone in this summer's "The Expendables."

Ed Viesturs, 50, USA (Mountain Climber)
Ed Viesturs has climbed Mount Everest seven times. He is the first American to summit the world's 14 highest peaks without the use of supplemental oxygen.

Laurent Gras, 45, France (Chef)
The chef/owner of Chicago's L20 restaurant maintains his two percent body fat by heading to the gym five days a week. His workout includes 30 minutes of jumping rope, an hour of spinning workouts, and some lower-body resistance training.

Sahr Ngaujah, 32, Sierra Leone (Broadway Actor)
To prepare for his Broadway role as Fela Kuti in the hit Broadway play, "Fela!," the actor does an intensive- running regime. "I would sprint and sing to expand my lung capacity and strengthen my vocal cords," he says. He also hits the gym daily for a 35-minute circuit of treadmill sprints, lat pull-downs, chest presses, and fly exercises.