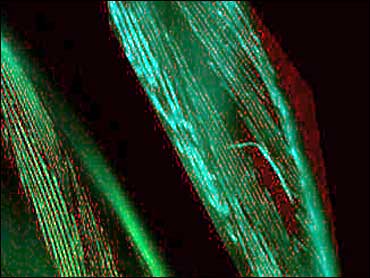 A tiny worm that barely lives more than a week under normal conditions may hold clues that could help keep us stronger and healthier until old age finally catches up with us, researchers say.

C. elegans - a roundworm that has already been the subject of research that won a Nobel Prize this year - apparently goes to seed much like middle-aged people, losing muscle cells in a process called sarcopenia, according to a study by Rutgers biologist Monica Driscoll.

The soil-dwelling, bacteria-eating worms have a very simple structure that allows scientists to count and observe each cell from birth to death. The worms also can be raised under experimental conditions that produce nearly identical populations.

But even though "it's essentially like looking at clones," Driscoll and her team were surprised to find there was significant variation in muscle decay and lifespan.

In a study published Thursday in the journal Nature, Driscoll was able to show for the first time that a specific enzyme, called PI3 kinase, has to be present for sarcopenia to occur, indicating there may be a simple way to delay age-related muscle deterioration in humans.

"This kinase probably has good chance of contributing to muscle decline in humans, which is why you don't have an athlete who's an Olympic champion after age 40," Driscoll said. "But the cool thing about this is that maybe you can fix a couple of key things and get significant enhancement of quality of life."

The lowly worm, containing a total of just 959 cells, already has proven a useful tool to make broad comparisons to humans. But most of those earlier studies have focused on DNA and the genetics of aging, not what happens at the larger, cellular level, researchers said.

The latest study is "one of the first papers that actually goes after tissue function in aging, so we're pretty excited about this," said Anna McCormick, chief of genetics at the National Institute on Aging.

The results also add to the evidence that random cell damage over time contributes to aging - the "disposable soma" theory - as indicated by the differences seen in otherwise nearly identical worms, Thomas Kirkwood and Caleb Finch said in an accompanying commentary in Nature.

Driscoll and her team started the research believing that aging slowly destroys the nervous system. But they counted every nerve cell in every worm they examined and "never saw the loss of even a single neuron," she said.

"We were shocked. The nervous system looks absolutely gorgeous even in animals we picked out as recently dead," Driscoll said.

That may indicate that our brains withstand aging better than our bodies, she said.