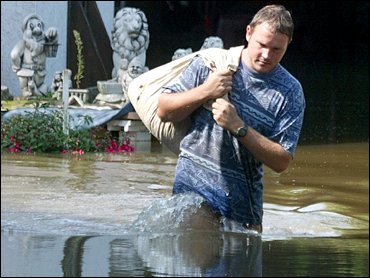 Thousands of emergency workers reinforced dikes in Germany's rural northeast on Tuesday, but officials believed the worst had passed after the last major city in the path of floodwaters was spared.

Flood barriers held overnight in the historic city of Magdeburg, 80 miles west of Berlin, after the Elbe river failed to rise as high as feared.

Authorities had considered moving some 20,000 people out of vulnerable areas of Magdeburg but decided against the move, confident that sandbag-augmented levees would hold back the water.

Officials in the Saxony-Anhalt capital, the second major German city hit by the Elbe after Dresden, credited a 19th century emergency weir that diverts some water to the east of the city with lowering the Elbe to a manageable level.

Further downstream, several villages were evacuated, but the environment ministry for Lower Saxony said it expected dikes to hold.

After Magdeburg, which was nearly completely destroyed in World War Two and today mostly showcases Soviet-inspired architecture, there are no major cities along the Elbe until Hamburg, which is not expected to flood.

The Elbe peaked at 22 feet in Magdeburg early on Tuesday morning, a spokeswoman for the city's crisis center said. "We're very pleased with how the dikes held," she said.

Authorities across northern Germany said they were ready for the Elbe flood wave which ravaged upstream towns and villages in eastern Germany last week and swamped historical buildings in Dresden.

As the cleanup operation gathers pace, Russia's Emergency Situations Ministry said it had sent 15 trucks to Germany with equipment including electric pumps, fans for drying buildings, and a mobile laboratory to determine their stability.

Storms and floods have killed more than 100 people in Germany, Russia, Austria, Slovakia and the Czech Republic in recent weeks. Hundreds of thousands have been driven from their homes, harvests have been ruined and buildings, rail lines and roads destroyed, leaving a massive cleanup and rebuilding task estimated to cost $20 billion.

Some estimate the cost of the damage in Germany alone nearly $10 billion.

German Chancellor Gerhard Schroeder announced Monday he was delaying tax cuts planned for next year until 2004 to free up $6.8 billion for flood repairs, even though polls show he is likely to lose next month's election.

Some economists warned that the delay will hurt growth in Europe's largest economy, but Schroeder himself could benefit by showing strong leadership and winning votes in the east, a key region for the September election because it has so many swing voters.

In central Romania, two teen-age boys died after the swollen Ghimbasel river burst its banks and swept away their cart, authorities said Tuesday. The accident happened Monday evening as they were returning to the village of Vulcan, some 118 miles northwest of Bucharest.

High flood ramparts allowed Budapest, the Hungarian capital, to escape largely unscathed as the Danube peaked Monday at a historic high. By Tuesday morning, the river's level in the city had fallen by 16 inches.

Still, celebrations of the country's national day Tuesday were scaled down and a large fireworks display postponed.

Authorities in Prague, where a massive cleanup is under way after the city's worst ever floods, said diseases might spread as the summer heat accelerated the decay of debris left behind by the receding waters. Many sewage treatment plants were forced to halt operations.

A foul stench has been rising from the sodden waste of households, shops and restaurants.

In Dresden, where the worst floods on record raised the level of the Elbe to more than 27 feet last week, authorities said they were aware of the danger of disease but saw no reason to panic.

The German government also moved to allay fears of disease caused by sewage, rubbish and carcasses left in the waters' wake.

Environment Minister Juergen Trittin denied a report in Bild newspaper that authorities were worried about a possible Hepatitis and dysentery epidemic.

He said there was no need for people returning to their homes and clearing up debris to take special precautions. "The normal rules of hygiene should suffice, which means washing hands and things like that," he told German television.

Meanwhile, a cause celebré during the floods, Gaston, the 12-year-old male seal who had ridden the flood waters for 188 miles, died hours after being recaptured on Tuesday.

Gaston grabbed the headlines after making a bid for freedom by swimming north into Germany when flooding in Prague swelled the waters of his aquarium beyond its walls.

The exact cause of the death was not yet known but German television pictures showed him looking exhausted after his rise in waters contaminated with sewage and animal carcasses.

In a sign that the city of Dresden was slowly returning to normal, its Abertinium museum which houses the Green Vault, one of the world's great collections of precious stones, is due to reopen on Tuesday.