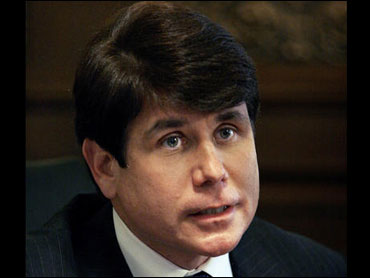 This column, Other People's Money, is written by CNET's Declan McCullagh. It appears each Wednesday on CBSNews.com.

The indictment of Gov. Rod Blagojevich offers more than a sketch of a man drunk on power. It should remind us that the more power politicians have to bail out private companies, the more likely they are to abuse it.

The criminal complaint accuses Blagojevich, a Democrat elected on promises to end a culture of corruption, and his chief of staff, John Harris, of conspiracy to defraud the state of Illinois and related charges. Excerpts from an FBI affidavit supported by wiretaps and hidden microphones quote the governor as saying that he wanted to trade Barack Obama's vacant Senate seat for cash: It's "is a f--king valuable thing, you just don't give it away for nothing."

Blagojevich is presumed innocent until proven guilty, and his attorney has denied the charges. So far, we've heard only one side of the story, and we've seen only selected excerpts of conversations. The governor-defendant will have his day in court.

In addition to an unfortunate sense of entitlement, what these criminals had in common is occupying a political office that wields substantial power and enjoys limited oversight.

Blagojevich is charged with threatening to withhold government funds from the Tribune Company, which apparently wanted financial assistance in connection with Wrigley Field (it owns the Cubs). The governor allegedly was willing to consider extending aid from the Illinois Finance Authority -- but only if the Chicago Tribune fired editorial board members who had dared to criticize him in print.

The FBI affidavit quotes Blagojevich as saying that the Tribune should be told: "Fire those f--kers... Our recommendation is fire all those f--king people, get 'em the f--k out of there and get us some editorial support."

Keep this in mind when Washington politicians want to use your money to bail out more and more private companies.

It's true that not all politicians yield to temptation and violate the law, and Illinois political life does occupy a special place in the rankings of the corrupt and mendacious. But permitting the government to dole out money to private businesses -- the Illinois Finance Authority hands out a hefty $3 billion a year -- automatically increases the odds of corruption. Politicians will be tempted to punish enemies and reward allies and campaign contributors.

This happens even though politicians are paid salaries that most of us would find generous. Blagojevich makes $177,412 a year and lives at taxpayers' expense in a handsome 1850s mansion, one of the oldest in the nation.

But the FBI claims Blagojevich wasn't happy with that, and wanted to make up to $300,000 a year by running a non-profit group after he left the governor's mansion. Blagojevich allegedly wondered whether Obama could get Warren Buffett and others to write checks to up to $20 million. (Obama advisor David Axelrod said last month that the president-elect discussed filling the vacancy with Blagojevich, but on Tuesday said he was "mistaken" about the conversation. Obama has not been accused of any wrongdoing.)

My hunch is that the Blagojevich allegations can be partially explained as simple envy. Governors are in frequent contact with self-made businessmen, many of whom are far wealthier even though they have less formal education. Billionaire casino mogul Sheldon Adelson is a college dropout, as is Bill Gates. Billionaire Kirk Kerkorian never finished high school.

All of these wealthy men lack the advanced degrees that lawyers-turned-politicians like Blagojevich earned. Combine envy with a sense of entitlement and a conviction that important work as governor must be richly rewarded, and you have a intoxicating cocktail that encourages skirting the rules.

As a side note, even the FBI seems to believe that politicians are more equal than the rest of us. Blagojevich was given the courtesy of a polite phone call asking him to surrender to agents waiting outside his home on Tuesday. Other suspects may find their front doors bashed in with a battering ram, their families handcuffed, and their Labrador retrievers shot dead.

The Illinois arrest comes as politicians in Washington are voting this week on a Detroit bailout, even though government auditors already have concluded there has been weak oversight so far. The more power politicos are given, the more likely they are to misuse it. The Blagojevich allegations should give Congress reason to pause.